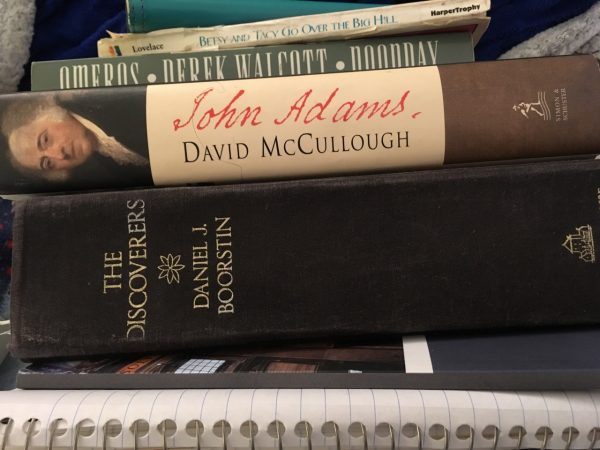 Could also be known as Death Takes a Holiday. There are moments in this one that I really love but I don’t follow the ending. Really, the whole thing with Azrael and the universe clock kind of makes me go: huh?

A perfect ending to the trilogy, a typical coming of age story ending in a happy match where our heroine chooses the perfect one of her suitors. I really am a sucker for these stories. I like Gay Allen as a protagonist. She isn’t overly bookish like Anne or Calpurnia, the books I’m reading with the kids, she’s a girl who loves horses and taking care of sheep. She’s got a good heart, tries to do the right thing, isn’t afraid of hard work. It was fun getting to explore a little corner of New Zealand

3. Betsy and Tacy Go Over the Big Hill by Maud Hart Lovelace

Reading with a group book group of sorts. I read half of this volume with Bella several years ago but she found it distressing and so we dropped it. I never finished it, being busy at the time, I guess. One thing drives out another. So this was my first complete read through. Too bad Bella doesn’t like stories with sibling rivalry and conflict (yes, it does get resolved in a good way, but the tension until it does, the fact that its there at all, bothers her.) too bad because last part of the book has some fine moments that I think Bella would like: the crowning of Naifi, the letter from Spain, the emeer. Most of all the pondering of what it means to be an American, about royalty and democracy.

Someone has offed the Hogfather, Discworld’s answer to Father Christmas, so Death takes over the role while his granddaughter Susan tries to find out what has happened. Meanwhile the wizards are beset with too much belief in the vacuum left by the Hogfather’s absence and new minor household gods keep popping into existence. Some very interesting meditations on the necessity of belief and man as a mythopoetic creature.

In which a new form of music invaded the Discworld, Music with Rocks In. Also, Death takes yet another holiday and his granddaughter Susan finds herself unwillingly taking his place. She spares the life of a musician who then becomes the conduit for this new music, aided by a magic guitar. Lots of funny plays on words and names, riffing on the history of Rock music. But the plot is kind of slow and rather drags in places. Susan and Death are the best parts of the book. Much of it feels rather strained.

A coming of age novel by the author of the Betsy-Tacy series. The book begins as Emily is graduating from high school. Unlike all her friends, she is not setting off for college because she’s an orphan who lives alone with her elderly grandfather who needs her. At first Emily drifts, not ready to let go of high school, not sure what to do with her life. But eventually she “musters her wits” and begins to find a direction. First, self-improvement: dancing lessons, music lessons, a book club, new clothes, new friends. And eventually she finds a need to fulfill: helping the Syrian community to integrate and become citizens. She begins with a few children and then befriends their mothers and begins to teach them English. Eventually she organizes a push to have language and citizenship classes at the high school when the group gets too big to meet in her parlor. Along the way Emily lets go of her attachment to the caddish Don and finds a new love interest who shares her concern for the Syrians. It’s a sweet book, right there with the later Anne books and Little Women.

1. Children of Earth and Sky by Guy Gavriel Kay

This re-read is taking backseat to all the other books, but I’m still reading at least a chapter a week. Still gathering my thoughts. Still thinking this is not going to be one of my favorite Kay novels. Alas.

Still ticking away, steadily. Still stunned by how beautiful this poem is.

3. The Discoverers: A History of Man’s Search to Know His World and Himself by Daniel Boorstin

Less than a hundred pages left, the end is in sight. And I’m so glad I’ve stuck with it. This has been an excellent book. I got bogged down in the natural science section but I’m back to the history of the idea of history and am loving all the meaty ideas to chew on.

4. The Village that Died for England by Patrick Wright

A strange story, I’m only a chapter in and so far I have no idea where the author is going. I feel like there’s a subtext, an agenda, that I just don’t get not being British.

So far most excellent. McCullough is a great storyteller and obviously loves his subject. He looks on Adams with affection and admiration and that shines through.

6. The Mass in Slow Motion by Ronald Knox

How I wish this were about the new Mass instead of the old (the extraordinary form). It’s so witty and clever and has wonderful flashes of insight. And is so painfully dated in many ways.

7. The Mass Explained to Children by Maria Montessori

This is a brilliant book. Like the Knox, though, it’s painfully outdated and only marginally helpful for a family that doesn’t attend the extraordinary form of the Mass. I have a dream of someone writing a similar book for the current Mass and yet realize what a daunting prospect that is. It’s not just that the prayers of the Mass have changed. It’s the vestments, the cultural context, so very much different. And yet, how clearly and lucidly Montessori writes and how much I wish this book could be read as-is to my children. And yet it’s too much of a historical artifact unless you’re a family who attends the traditional Latin Mass. There is such a need, though, for this kind of book.

Six books completed this month to last month’s one. Definitely an improvement. All six finished books were light reading, either fantasy or juvenile novels. The heavier reading just progresses at such a slow pace. And yet if I fill up on too much light reading, I don’t spend enough time on the heavier stuff that I do want to make time for. Finding balance. It’s all about balance.