Into the Sea, Out of the Tomb: Jesus and Jonah
3 comments
Share:FacebookTwitter
BiblebooksPicture Books

Into the Sea, Out of the Tomb: Jesus and Jonah 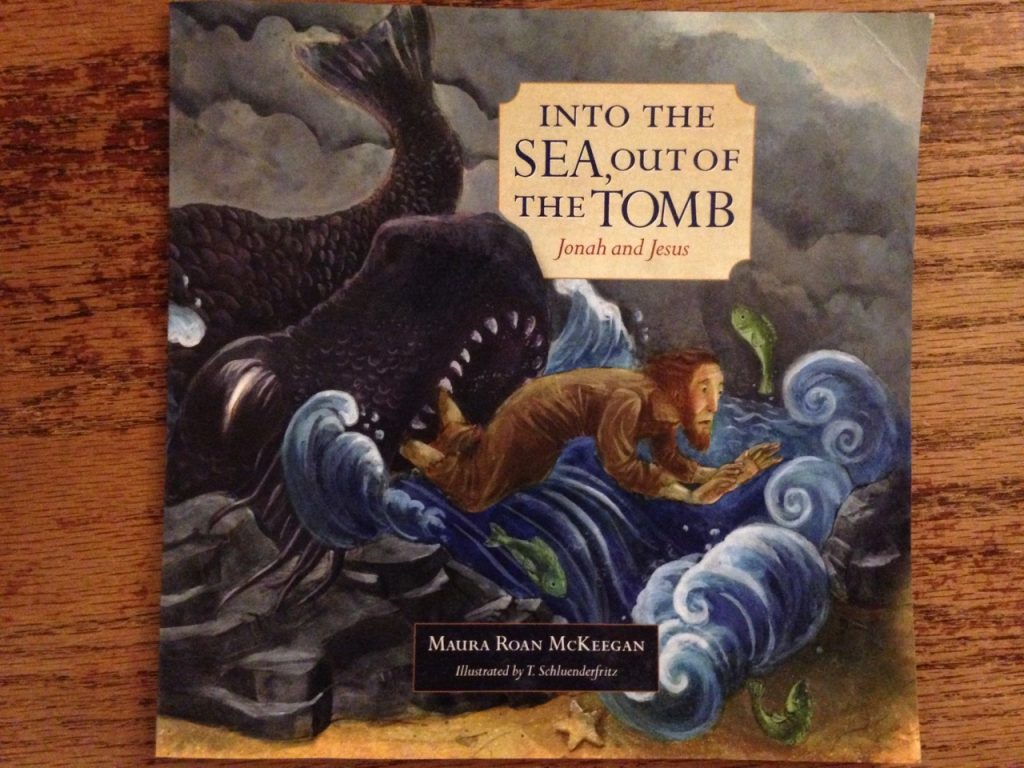 Into the Sea, Out of the Tomb: Jonah and Jesus by Maura Roan McKeegan illustrated by Ted Schluenderfritz

“For as Jonah became a sign to the men of Nineveh, so will the Son of man be to this generation… behold, something greater than Jonah is here.” Luke 11:30, 32

I loved McKeegan and Schluenderfritz’s first book, The End of the Fiery Sword, a book which introduces children to Biblical typology by showing the parallels between the story of Adam and Eve and the story of Jesus and Mary with text and drawings that highlight the elements that occur in both. (see my review here

This second book has the same structure as the first. Here the two parallel stories are that of Jonah and of Jesus. I love the way these books gently use the Bible’s own parallelism to show the New Testament hidden in the Old and the Old unveiled in the New. McKeegan’s carefully parallel sentences highlight many parallels in the stories that I hadn’t even considered before.

God had a special mission
For a man named Jonah.
He told Jonah
To go to a great city called Nineveh.
The people there
Were doing wicked things
And God wanted Jonah to warn them.

God had a special mission
For his son, Jesus.
He sent Jesus
To a great city called Jerusalem.
The people there
Were trapped in their sins
And God wanted
Jesus to save them.

Back and forth it goes between the two stories, gently leading the child to make connections, but never getting too didactic, never telling them directly what the connections are and what they mean. It fosters a deep relationship with the Biblical narrative and encourages the child to a certain mode of thinking, hopefully the beginning of a lifelong journey into thinking about the Bible as a text that rewards multiple readings and deep pondering.

The sailors didn’t want to kill Jonah.
They asked God
not to charge them
With shedding innocent
blood.
On the ship’s deck, the sailors cast lots.
Jonah told the sailors
To throw him into the sea.

The crowds wanted to kill Jesus.
Pilate asked Jesus
about the charges against Him.
And said he was innocent
of this man’s blood.
On Calvary’s hill, the soldiers cast lots.
Jesus let the soldiers
Nail Him to a cross.

I’ve already seen how this pondering is taking place in my own children. Just the other day when we were discussing Life of Our Lord for Children eight year-old Sophie informed me that the Old Testament is all about Jesus even though he’s never mentioned directly. She was quite firm on this point and had obviously been thinking about it and I’m sure these books have been a part of that meditation.

As with the first book, the illustrations by Ted Schluenderfritz are lovely and meditative. They also reinforce the parallels in the story, going beyond the text. For example, in the first crucifixion page layout we see Jonah on the left page sinking down beneath the waves, the boat over his head, with his arms outstretched in a cruciform gesture. His legs are cut off by the bottom of the page. On the facing page we see Jesus on the cross from the waist down, almost as if it’s the bottom half of the Jonah picture. The dark tones of both pictures flow into one another. I love the lighting in both pictures as well. In the Jonah picture the light streams down around the boat and falls in beautiful beams on Jonah’s head. In the crucifixion page the light comes from a small fire that the dice playing soldiers are huddled around. Two of the soldiers are intent on the dice, but the third kneels and gazes up at the cross with one hand raised as if to strike his breast in a gesture of penitence. The hand above his heart almost glows, drawing your eye to the gesture. It’s so lovely.

On the following page spread, where Jesus dies, we see the other half of both pictures: Jonah’s feet with fishes around it and a great monster with glowing eyes coming up from the deep to swallow him while opposite we see Jesus on the cross, his whole body is shown except the feet are cut off. A crescent moon— or is it an eclipsed sun?— glows above his head, shining faint light on the giant billows of cloud. 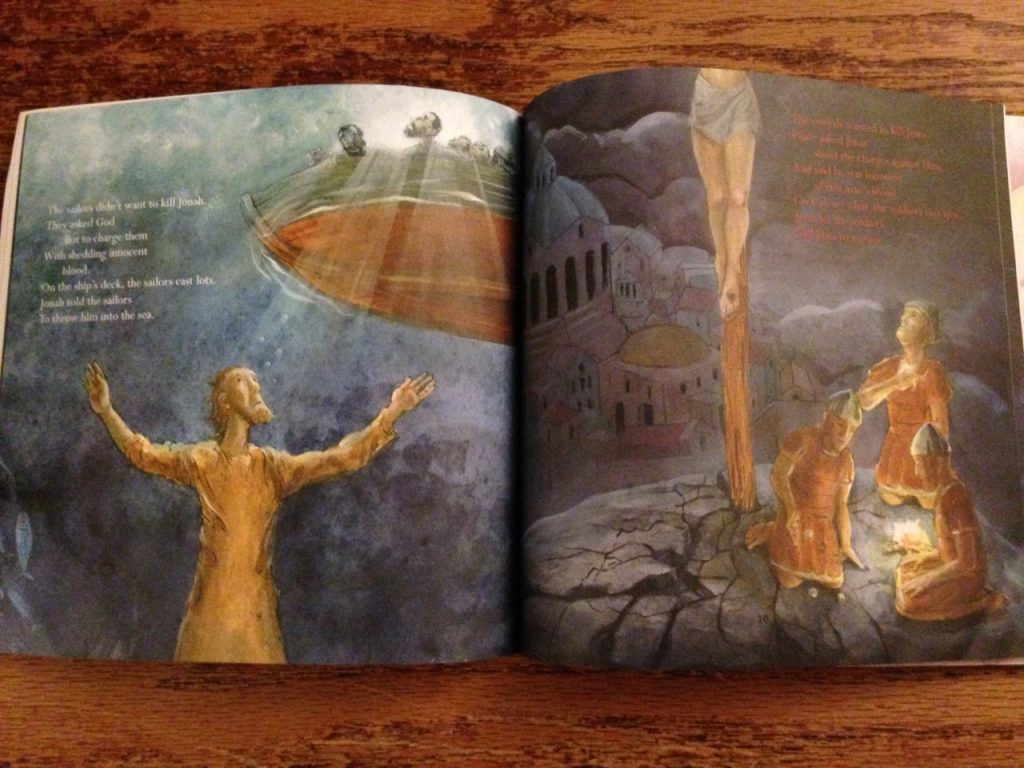 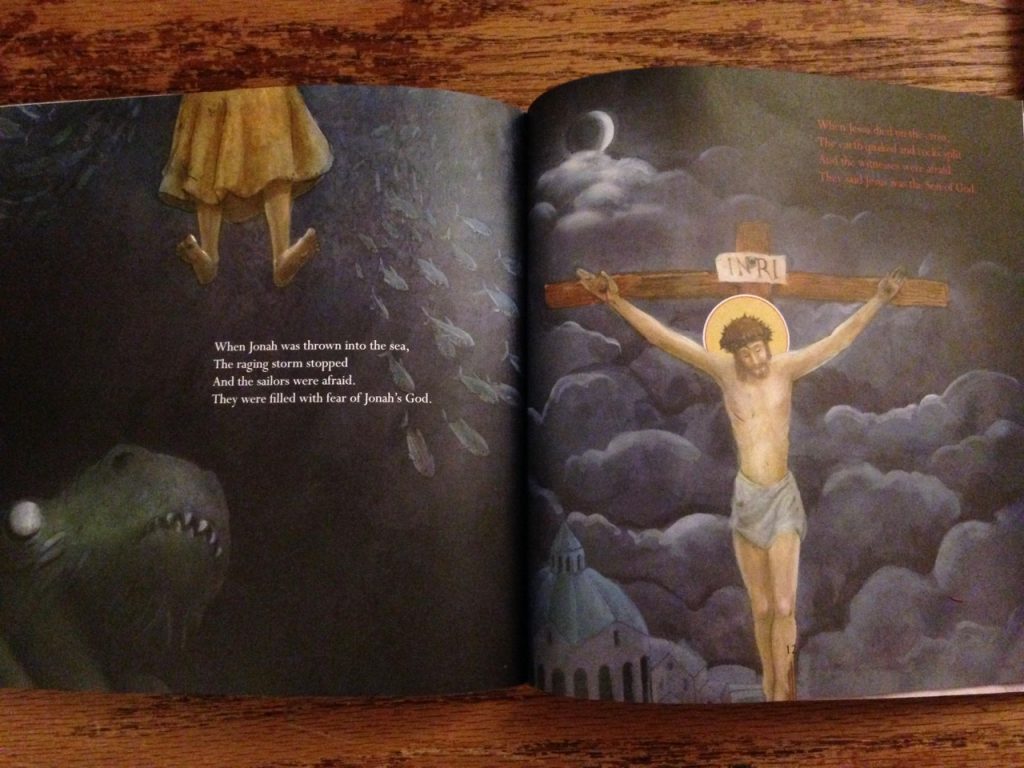 I love that there is a scene where both Jesus and Jonah fall asleep in a boat in a storm and there is only one picture to illustrate this moment, the two are conflated into one sleeping man in one boat, described by two different chunks of text. My only quibble about this page spread is that the red words on the dark background are really, really hard to read. I’m often reading at bedtime under less than optimal lighting and I struggle to figure it out. In general, though, I like that Jonah’s story is in a black typeface while Jesus’ is red. I don’t remember noticing that in the previous book. In fact, I only just now noticed it in this one. It’s subtle and so very appropriate.

One final detail that I noticed in the illustrations is that the risen Jesus, in the traditional white robe with visible stigmata and holding a cross shaped staff, appears in an almond shaped mandorla just as God appears in a mandorla in the Garden in McKeegan’s first book. In the final page when we see the Heavenly Jerusalem the lamb with a red banner appears in another mandorla, this one with the angels surrounding it just as in the mandorla in the Garden of Eden. I also love the stylized City, which is subtly different and yet sort of the same, as if there is only one Earthly City and as if the Heavenly City is merely the same in a more beautiful and idealized form. 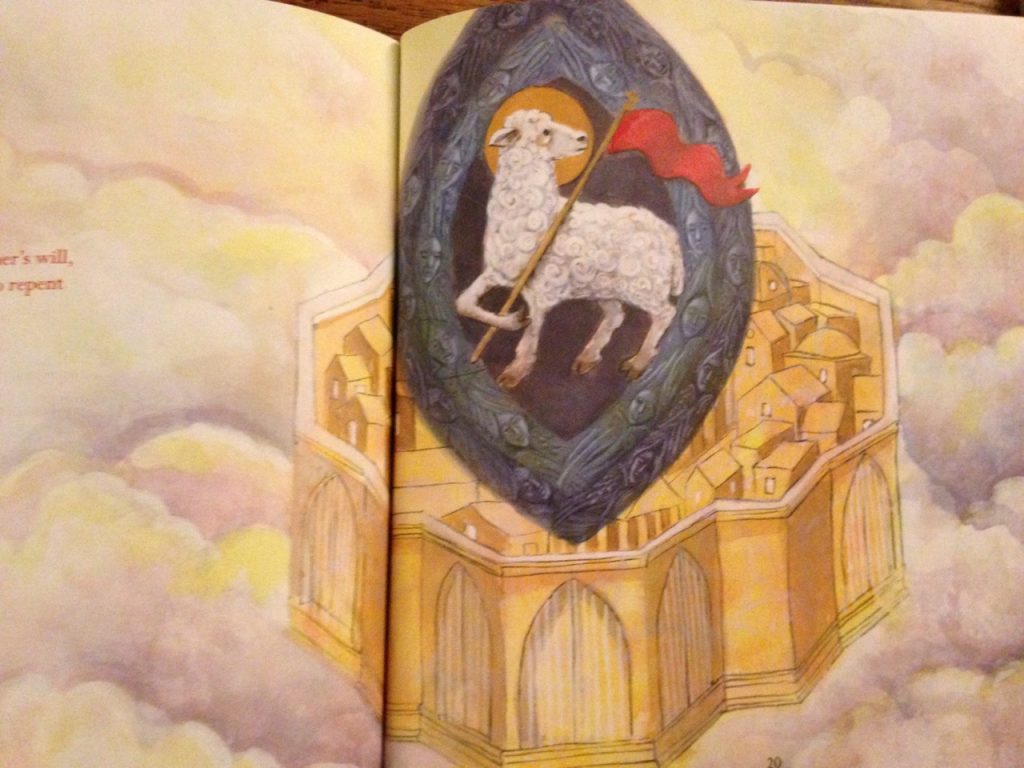 This series is a must-have for any Catholic children’s library or religious education program. I can’t wait to see what comes next. I seem to recall hearing a rumor about Job. That would be really cool. Job is one of my favorites.