Reading Notes: What I read in June
2 comments
Share:FacebookTwitter
booksUncategorized

Reading Notes: What I read in June 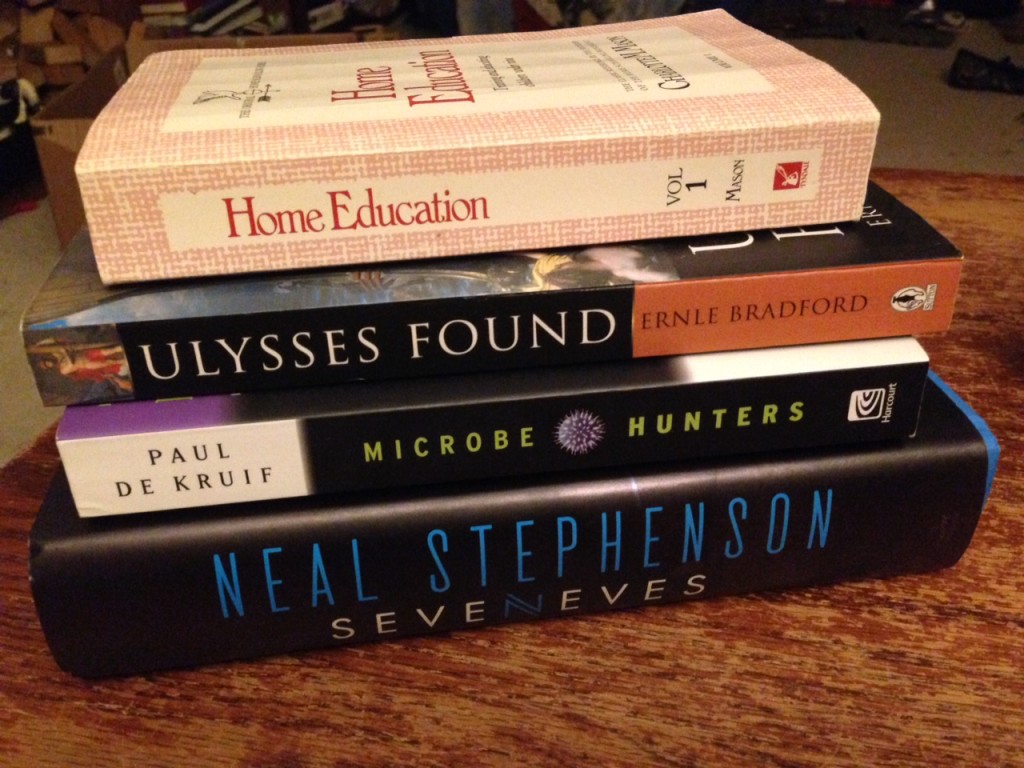 This was one of those times when I knew absolutely nothing about the novel when I bought it except that it was by one of my favorite authors. A friend mentioned it was coming out, I pre-ordered a copy on Amazon, and when it came I wasn’t even sure how to pronounce the title. The first sentence threw me for a loop, one of the best and the rest of the novel was a wild, blindfolded rollercoaster ride.

I fear to say much about the novel for fear of spoiling it. And yet it’s the kind of book you’re dying to chat about. I did have a cozy chat on Facebook. I’d be willing to chat here, if you want to leave a message in the comments. Or just email me.

The author draws on years of sailing in the Mediterranean and years of reading and re-reading the Odyssey to try to discern the man behind the myth and in particular to determine where the various events of the Odyssey take place. Using his knowledge of prevailing winds, currents, harbors, and other geographical features and taking Homer’s descriptions of places and his details about sailing as accurate, he makes a convincing argument for his reconstruction. A highly entertaining read.

I wrote a separate review of it, here.

Two English children spending their holidays on the Greek island of Melissa join with two young Greek friends in an elaborate scheme to foil the greedy and corrupt mayor of the town where they are living. It involves stealing every donkey in the village and swimming them to a deserted island off the coast. Hilarity ensues. I love Durrell’s style. His books are funny, and he’s also a keen observer both of the animal world and of human nature. This one would be a great read aloud for the kids, except that I’m not quite sure I yet want to deal with explaining the scene about the “bitch in heat.” Yeah, I might skip that passage– not that there’s anything really wrong with it, just my own level of comfort as a reader– or save this book for later.

The first person narrator, Caitlyn Ann Smith, is a 11 year old girl with Asperger’s Syndrome. (I’m pretty sure the book was written before the latest DSM revision which folded Asperger’s into a general Autism Spectrum diagnosis.) She’s just lost her older brother, Devon, in a school shooting. He was the one who helped her to understand the world and now that he’s gone she’s adrift. Her father is too sunk in his own grief to help her much. (Her mother had died two years previously of cancer.) Yet with the help of Miss Brooks, her counselor, she finds a way to seek the closure she desires, to heal her relationship with her father, and to begin to make friends and to integrate into the community.

There were times when this book felt a little too pat, the conflicts resolved too neatly and quickly, perhaps that’s because it’s meant for a younger audience? I’ve read reviews by people who feel Caitlyn is a little too cardboard, noting that no one has all the textbook Asperger’s traits like she does. And perhaps there’s something uncomfortable about the way her character is depicted as overcoming all these hurdles to Get It. But on the whole an interesting read and one that could help younger readers to develop compassion for others who are on the spectrum.

5. For All the Tea in China: How England Stole the World’s Favorite Drink and Changed History

This nonfiction book tells the story of the British botanist, Robert Fortune who penetrated into the interior of a closed China and stole tea seeds and seedlings and then bribed Chinese tea experts into sneaking out of the country so that they could impart the secrets of tea growing and curing so that the British East India company could grow tea in India and be free of China’s economic control. It’s a tale of botany and industrial espionage, history and geography and a really good memoir of a fascinating character.

If I have any criticism it’s that the book felt out of focus at times as Rose gets so caught up in the story of the East India Company that she devotes a whole chapter to the Enfield rifle and it’s role in sparking the rebellion that led to the East India Company losing its charter and being dissolved. Interesting stuff, don’t get me wrong, I really enjoyed the chapter. But a departure from the story of Fortune and Tea and only sort of tacked on with the excuse of explaining the end of the Company’s rule of India.

The botany bits were really my favorites. I was especially intrigued by the technological breakthrough of the Wardian cases that made it possible to ship plants and seeds long distances and in all weather and climates. I loved the digressions into all the other botanical matters. The descriptions of Fortune’s adventures while disguised as a Mandarin and his unreliable Chinese servants were comical and cringeworthy by turns.

This is really my favorite kind of nonfiction book, combining history of science and cultural history and interesting personalities. I was afraid that it would be repetitive since I’ve read another book on the history of tea, but it had such a different take on the topic that it was completely new and fresh.

by Paul de Kruif. Well-written and lively stories about scientists, but seriously marred by de Kruif’s casual racism, perhaps not unremarkable for it’s time, but oh it’s painful to read phrases like “doomed darkies” and other racial slurs. Also quite frustrating is his seeming belief in the incompatibility of science and religious faith, though this seems less noticeable in later chapters on Pasteur whose faith is treated more respectfully than that of Leeuwenhoek and Spallanzani. There’s some anti-Catholic nonsense and causal assertions that believers do science in spite of belief or that science is their true faith. And then there’s the chronological snobbery about the anti-intellectual superstitious dark ages before science suddenly sprang up out of nowhere like Athena from the head of Zeus. And he refers to priests as “blind follower(s) of the faith.” And then though he can display no proof that Spallanzani ever disbelieved in God but Kruif insinuates his disbelief as if it’s not possible to for him to have been genuine but close about the question? “if he questioned this he kept it– rogue that he was– strictly to himself.” Because it’s unbelievable that a man can be a skeptic in the world of natural philosophy but a believer in God and a faithful priest?

I’d love to use this book to read to the kids for science because the stories of these great and important discoveries are so very well told, dramatic and sure to hold their attention and capture their imaginations. de Kruif obviously loves his material and writes about these men with passion and affection, if sometimes with a certain amount of exasperation too. Certainly this qualifies as a living book, ala Charlotte Mason. But I’m going to have to heavily redact in some sections with a pencil first. Other problematic material from my perspective is stuff about suicide and syphillis. I’m not sure I really want to get into those touchier subjects with my very young crew.

Of course there have been so many more discoveries in the field of microbiology since the 20s that the book is also a bit dated in that way, but the stories about historical figures aren’t terribly affected by that.

I’ve read many books about Charlotte Mason and many blogs and they have included so many excerpts that I’ve really read a good deal of Charlotte Mason. But I’ve never actually sat down to read this book and I’ve owned the whole homeschooling set for many years now. When I’ve tried previously to read any of her books, her prose felt impenetrably dense and 19th century. But now it feels lucid and clear and beautiful and inspiring. So I guess the time is right now but was wrong before. Anyway I’m underlining and thinking as I read but I probably won’t write any blog posts because that would really be more work than I want to do. Writing is hard work.

Updated to add that I’m not sure how much I’m going to read this time through either because my brain is flighty and there are other books calling me.