Hard to get everyone on task. Bella and Sophie eventually each did a page in their MP copybooks and a page in the Miquon Math books.

Sophie’s copy work was from Exodus, and she asked me what “a land flowing with milk and honey” means. We had a really good discussion, with Bella taking the lead but Sophie jumping in too. We thought about biology and ecosystems and what cows need to give milk and what bees need to make honey and contrasted the water-rich fertile grasslands with abundant flowers with the desert the Israelites had been wandering about in for the previous 40 years. We talked about manna and the quail and it was all really good. Later I read them the day’s Gospel and we had a nice discussion about it, verse by verse as I made bread. Bella asked good questions about the commissioning of the 72 disciples, and we pondered deeply. Sometimes I didn’t know the answers to her questions, sometimes we came up with some interesting speculations.

Then each read me a board book. Bella read I Love You as Much and Sophie read the Degas one. And that was all I tried to do. I didn’t get around to doing math with Ben, my fault, too distracted myself.

We watched a little bit of the ballet A Midsummer Night’s Dream. I don’t recall how we got on the topic, but Bella enjoyed it very much.

Then they prevailed upon me to let them watch the first half of Much Ado about Nothing.

Before anything happened the kids had to go out into the snow. We’ve had nothing significant so far this winter, just a few dustings. They were all so very excited at the arrival of this blizzard. Who can resist deep, deep snow, drifts up to four feet deep?

But I did get them to do a little math and copy work and reading by dangling a little carrot: they got to watch the second half of Much Ado. The each did a page of math, a page of copy work, and then read me a board book each.

The snow stopped late last night but today was a digging out day. Our snowblower also stopped so Dom had to dig out by hand. And his back was already hurt before the snow started falling. Bella volunteered to go help shovel to save him some work. I’m not sure how much of a help she was, but every little bit counts, right? It was very sweet.

We got started late on school, but the girls each did a page of math and a page of copy work. Sophie and I did some counting pennies and dimes. She really has hard time understanding place value still. I need to find some thing that will make it click for her.

Sophie read me all of The End of the Fiery Sword. Bella read me We’re Going on a Bear Hunt.

Bella listened to her ipod while the other kids watch The Empire Strikes Back with Dom.

Afternoon stories were cut short by the movie and by my falling asleep. I read David Macauley’s Castle with Bella and then read Brambly Hedge at Ben’s request. The Winter Story one, of course.

We’re definitely at low tide with school I can’t seem to get moving early these days. Hard to get around to doing math with Ben. And to history, science, poetry, etc. We’re doing bare minimum to keep up the habit of table time for the girls and that’s about it. I really need to work on getting the habit established with Ben. He’s still doing the November lessons in Saxon, which isn’t a huge deal since we can work through the summer, but both the girls were ahead in the book at this point. Right now we’re averaging math one day a week for him. I’d like to get it up to three or four and add in a reading lesson too. But baby steps. First one and then the other. And somehow figure out how to get the other stuff done too. 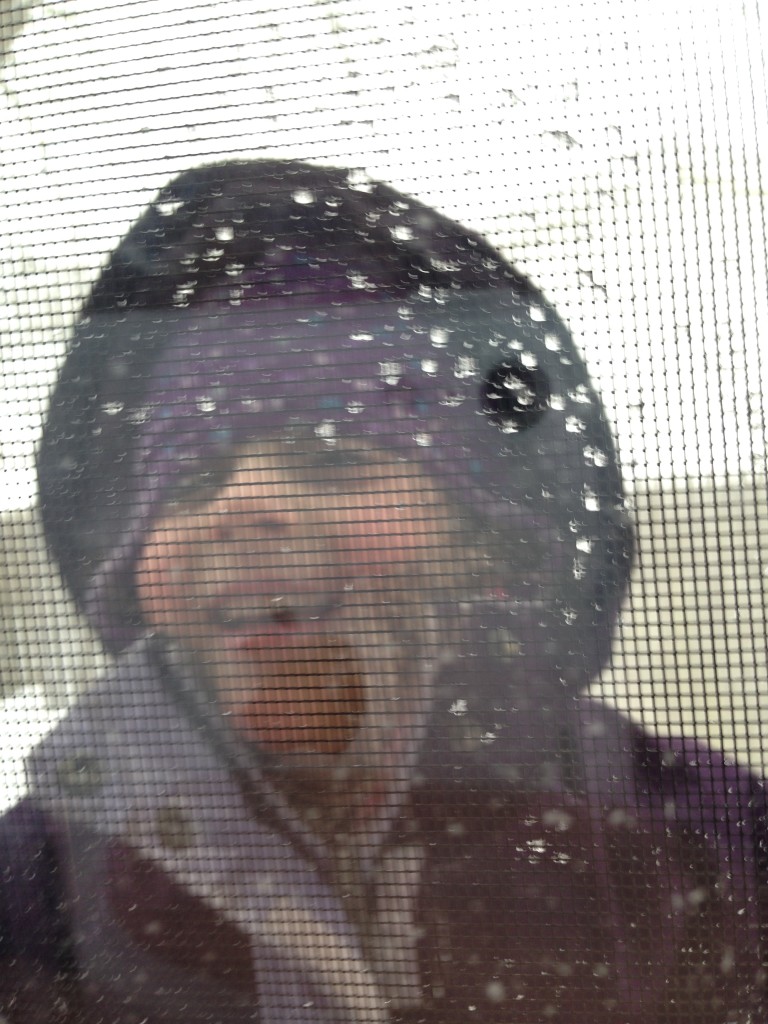 Grocery day. Sophie managed to do a page of math before we left for the store. Bella did not.

When we came home Bella drew a picture of the Virgin Mary and then captioned it “Here I am the hand maid of the Lord”. She kept coming back to it and adding decoration over the course of the afternoon: a dove, flowers, halos. By the end it was quite striking. She has a good eye for design.

Afternoon stories: I read Merry Christmas Strega Nona for Ben and the Tale of the Flopsy Bunnies for Anthony. Then Little House in Brookfield, Plum Creek, St Thomas More, and Faith and Life.

They wanted to watch As You Like It so Bella sat down and flew through a page of math and then read me a board book. I counted her caption on her Virgin Mary picture as copy work for the day and so let them watch the first half of the play.

I noticed Bella picking up Bob books and reading them to herself. 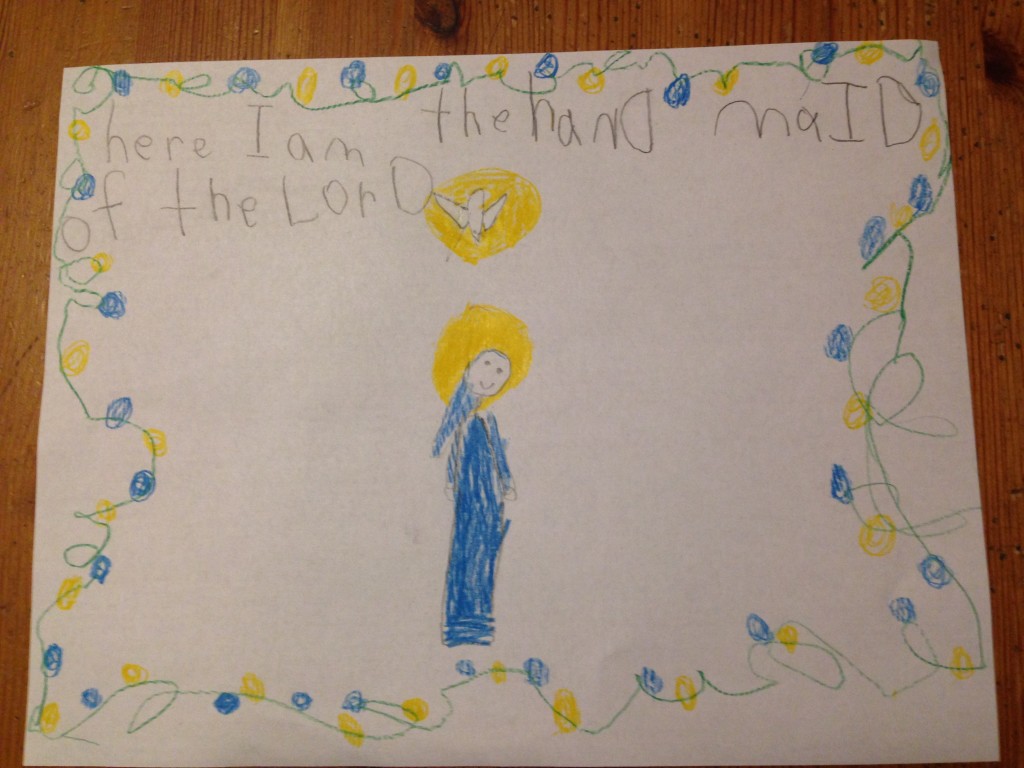 Lucia had her two year checkup this morning. Finally. See, what happened is I think her 18 month visit got rolled into some other child or children’s well visit. So I just made appointments for the next year. Which put Lucy’s at 2.5 years. But I’d forgotten about that and when I called to ask if I’d made a 2 year appointment the receptionist, who tends to be a little flaky, told me it was made for June or July, I forget which. And when I asked if it shouldn’t be January instead since this was when she actually turned two, she said she’d have to ask the insurance company and then she couldn’t reach them and told me I’d have to call them. Then I was so flustered I got off the phone. It took me the better part of a day to figure out what had happened. Then I tried to call back and something happened. And then I kept forgetting to call back. Or remembering only after the office was closed for the day— one day it was already on the answering service at 3:30! And then I did finally schedule it for Tuesday and it was cancelled on account of the blizzard.

Anyway, Lucy had her appointment, which I had written down at the improbable time of 10:15, our office never does appointments on the quarter hour, but I was positive that’s what she’d said and that’s what I wrote down. So we had time for the girls to do some school work. Both did math with Cuisinaire rods to help. Both did a little copy work. And then it was time to go so nobody read to me.

Then we got to the office and when we walked in the receptionist said we were supposed to have been there at 9. But she wasn’t too worried and we got in to see the doctor anyway. And Lucy was whimpering as soon as the doctor pulled out the stethoscope, but was mostly stoic until she had to get her finger pricked for the lead screening and iron test. And then she bawled but did not try to pull her finger away. And then she was mollified by a lollipop. Our pediatrician is an older Filipina who firmly believes in bribing children with candy. But I like her otherwise, so while I abhor the stickiness, it’s not a deal breaker.

Back home and the children took turns playing outside in the heaps and heaps of snow. First Bella and Ben stayed out and had snowball fights and shoveled snow and slid down the heap at the foot of the driveway while Anthony and Lucy had lunch and squabbled and then Anthony and Sophie played very nicely together. Then Bella and Ben came in for fish sticks and chips and Sophie and Anthony headed out while I put Lucy down for her nap. Then Sophie came to Anthony’s great distress because he wanted to stay out but didn’t want to be alone. Well, Bella came back out to play with him and I stayed to take some photos and to tramp about in the backyard and then made the bottom part of a snowman and Dom came home early and then Lucy woke up but I was too tired from trying to make a snowman while trudging through snow that was more than knee deep (the kids are light enough to sort of walk on top, but I fall through) so we decided to go to the Vietnamese place and get noodles and rice and lots of hot tea. So we never did get our afternoon stories. Sacrificed to make a snow day after all, on the day when most local children had gone back to school. We homeschoolers are backward, aren’t we? 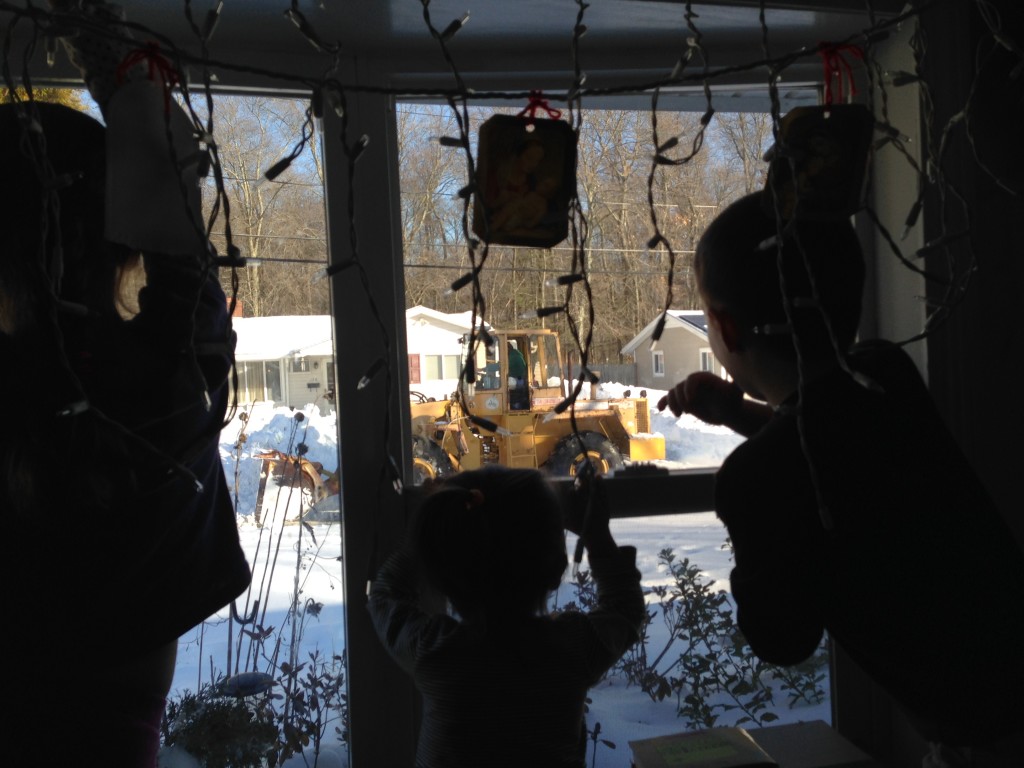 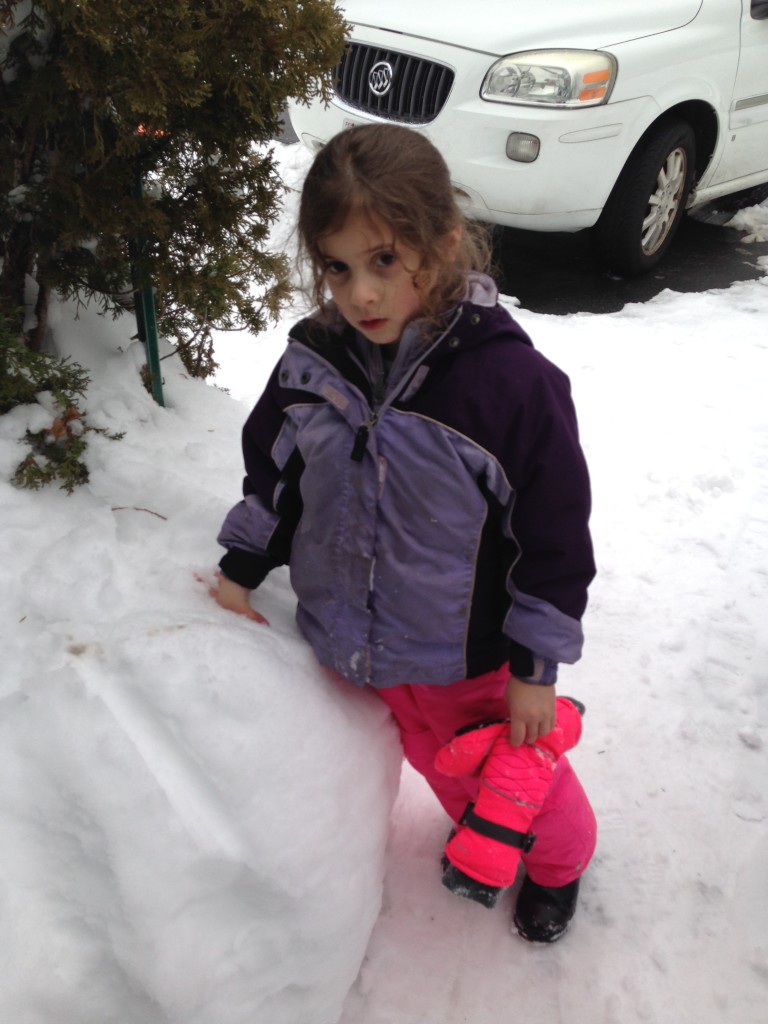 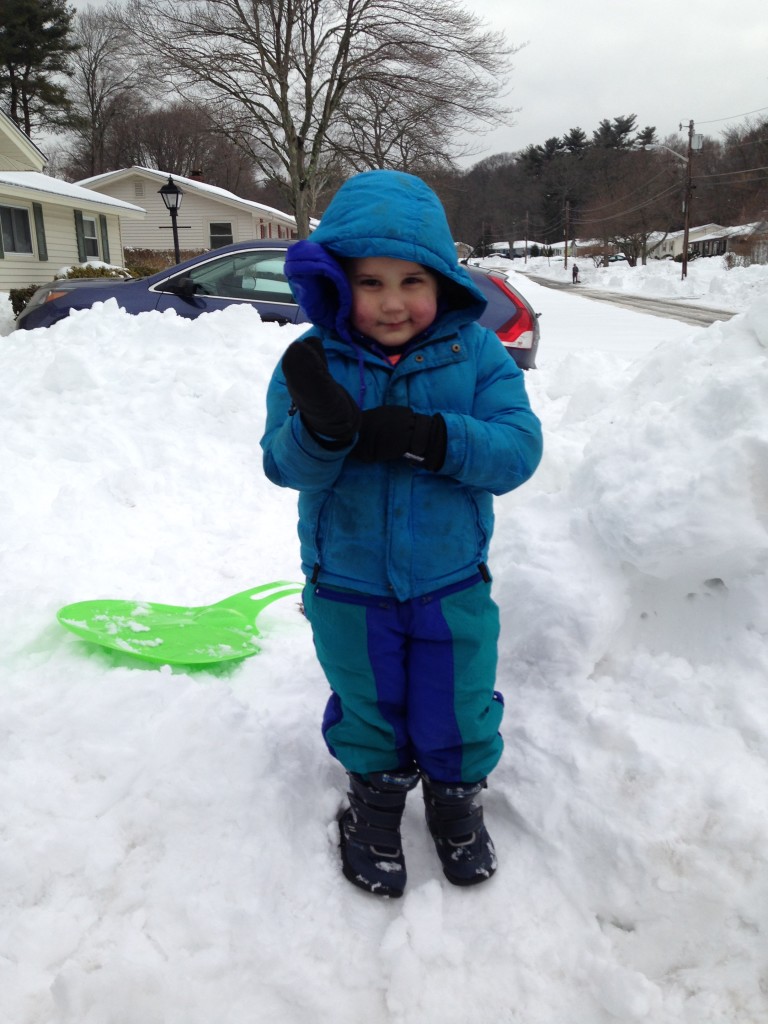 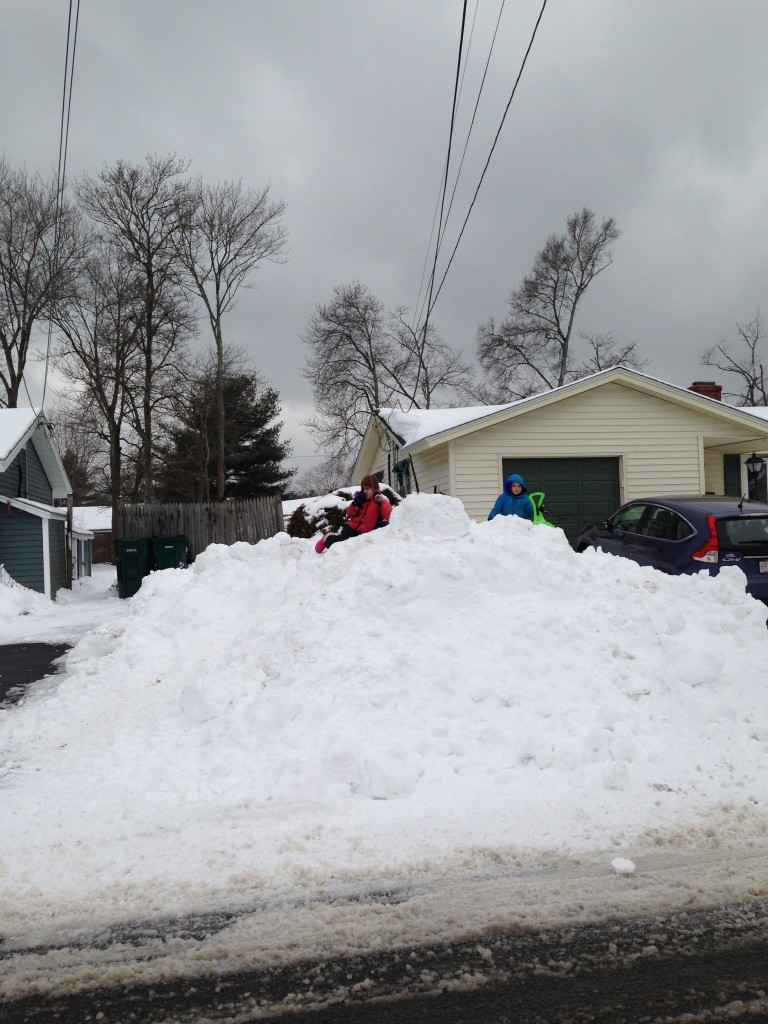 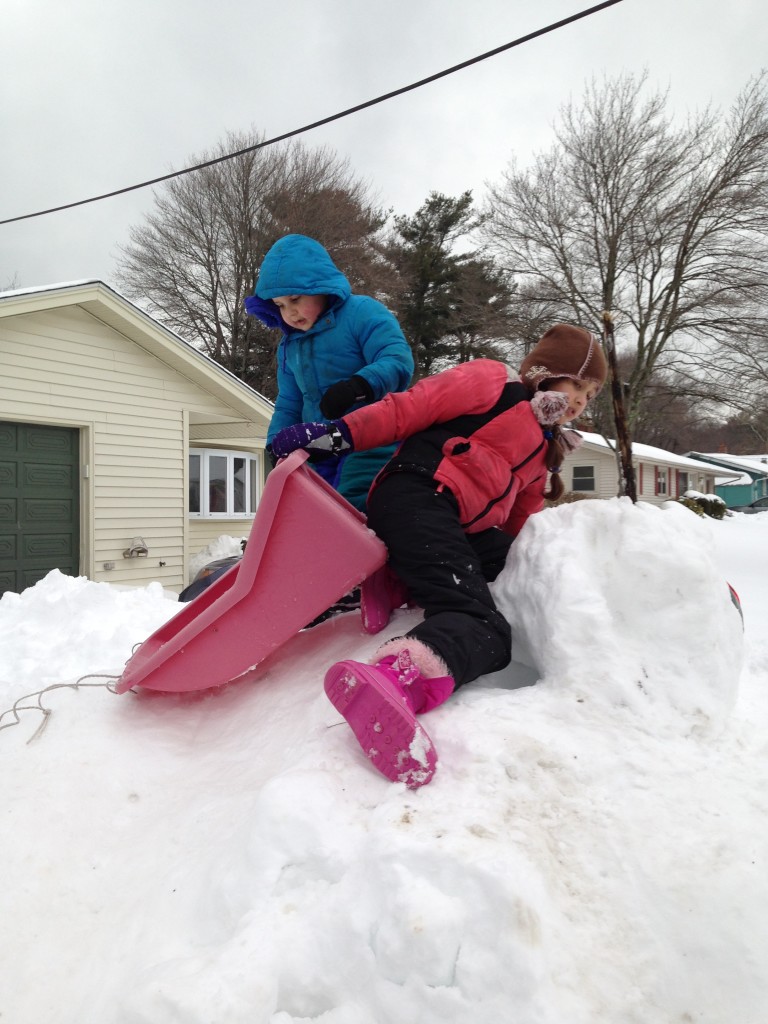 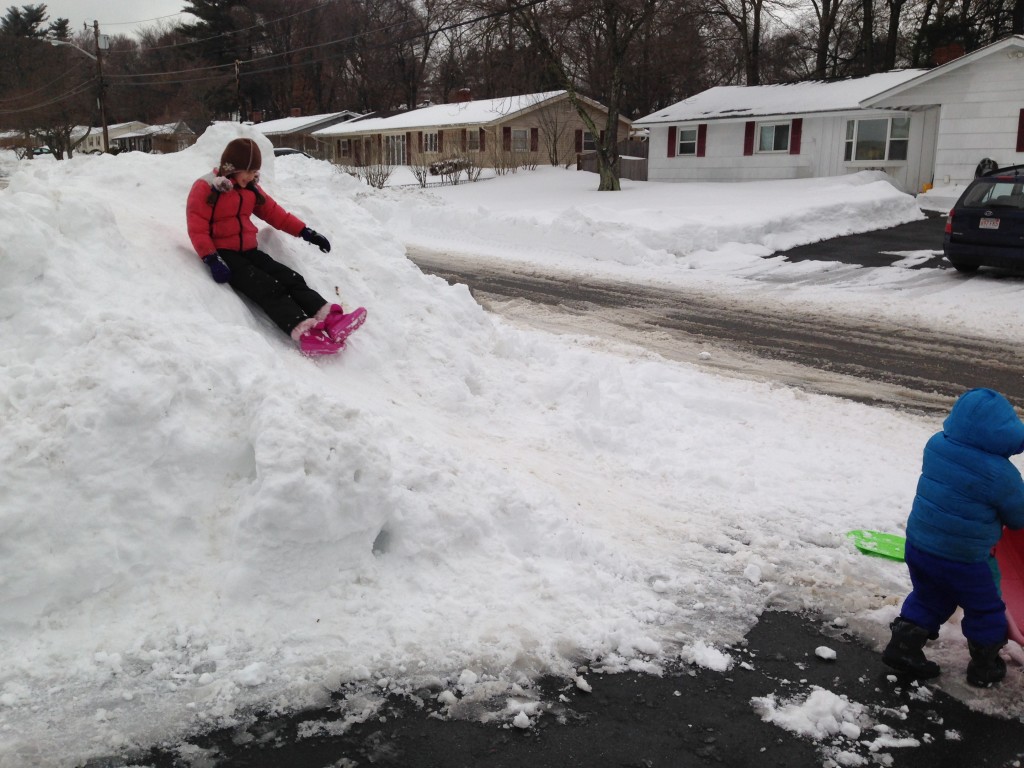 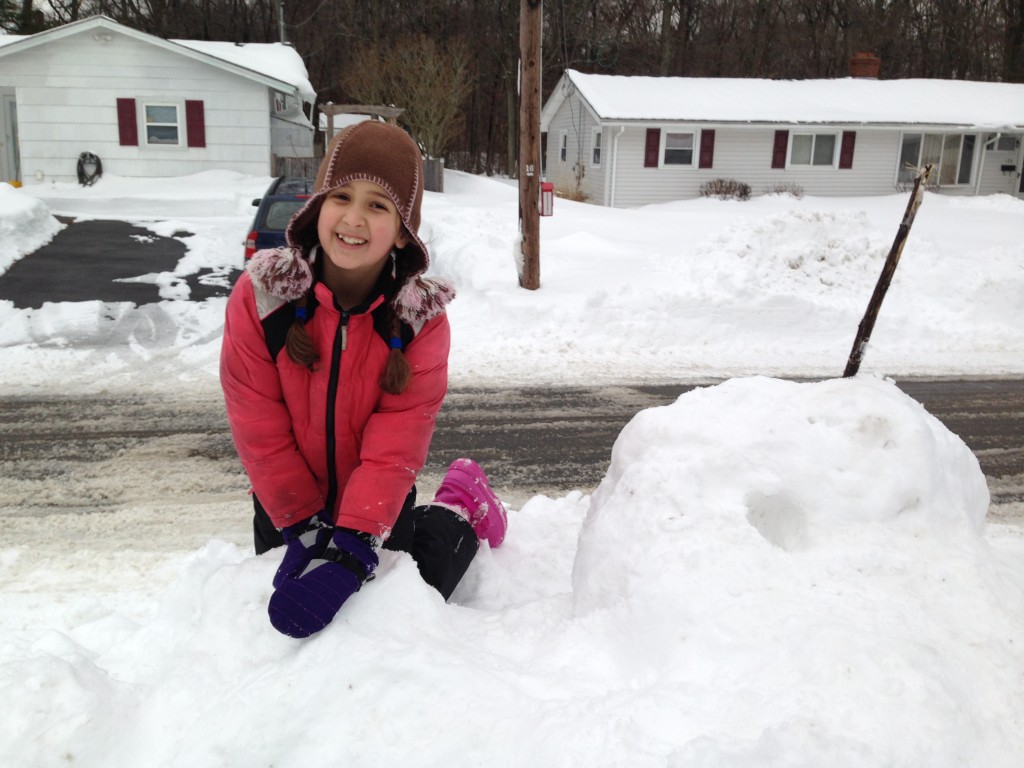 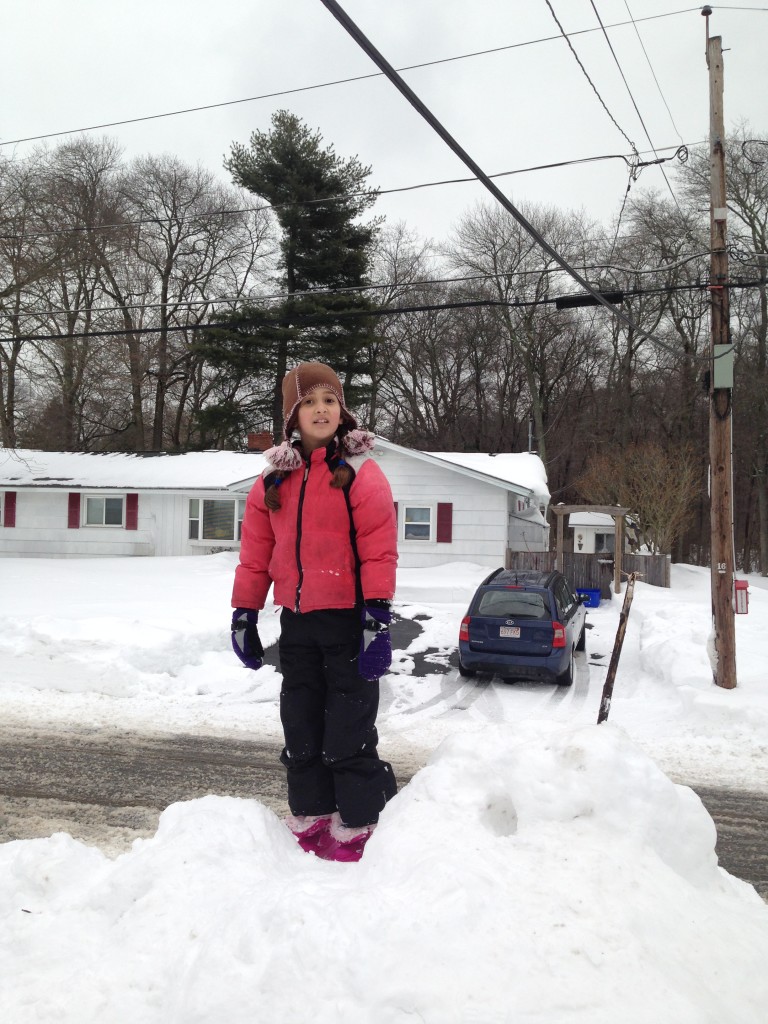 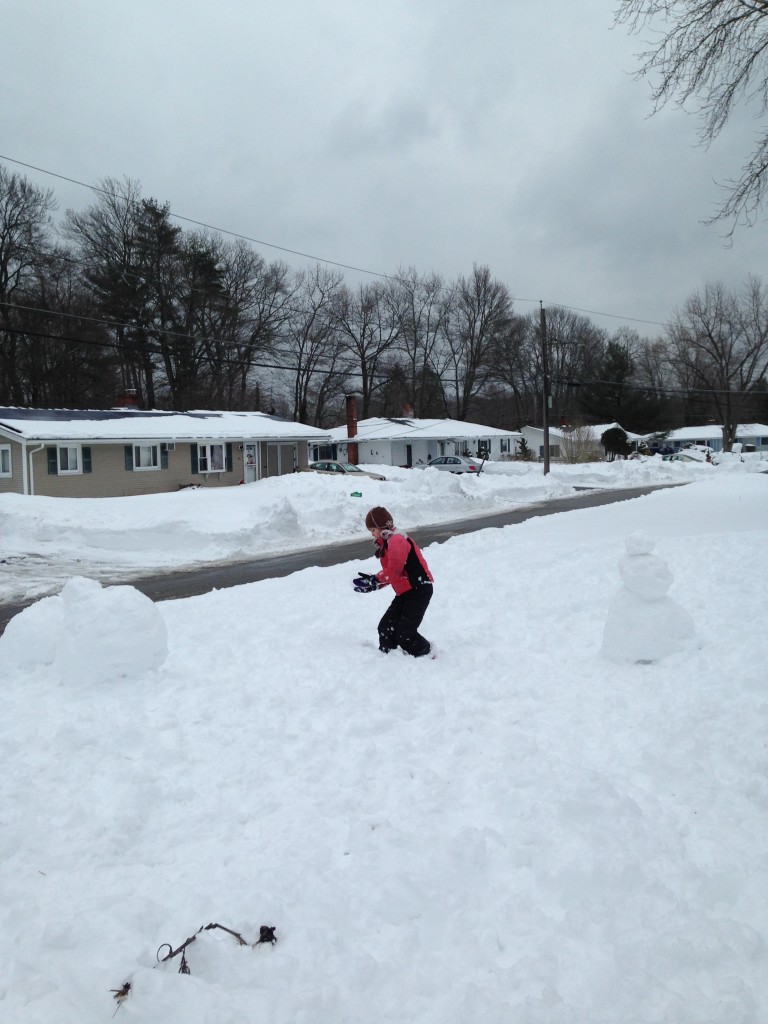 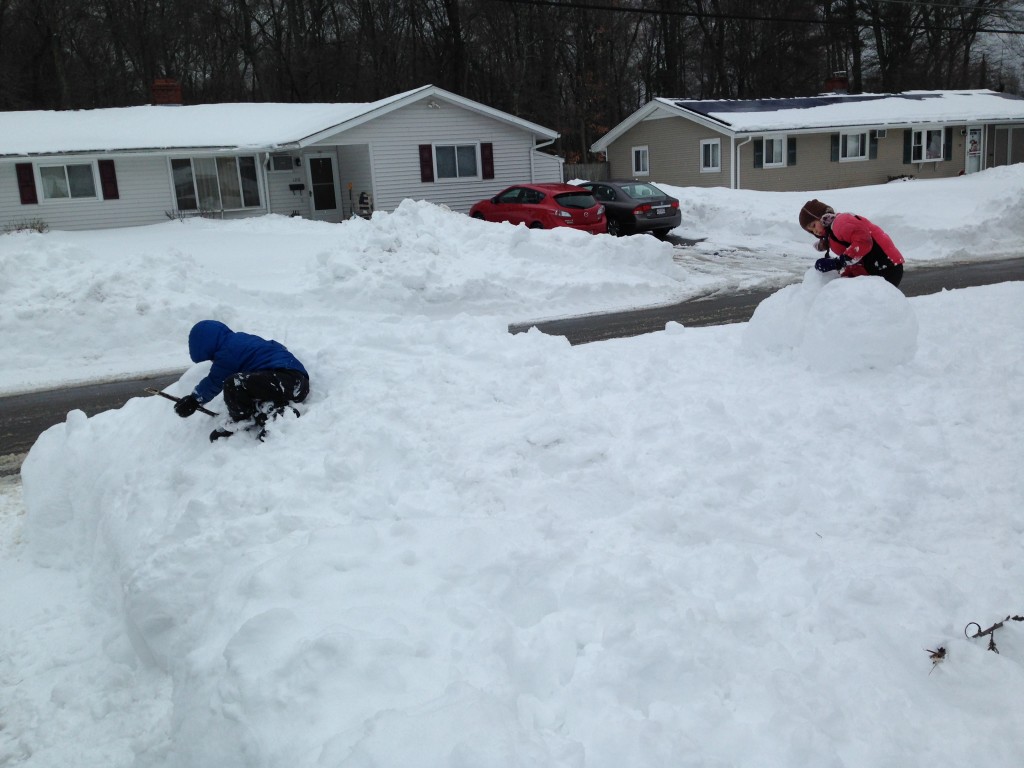 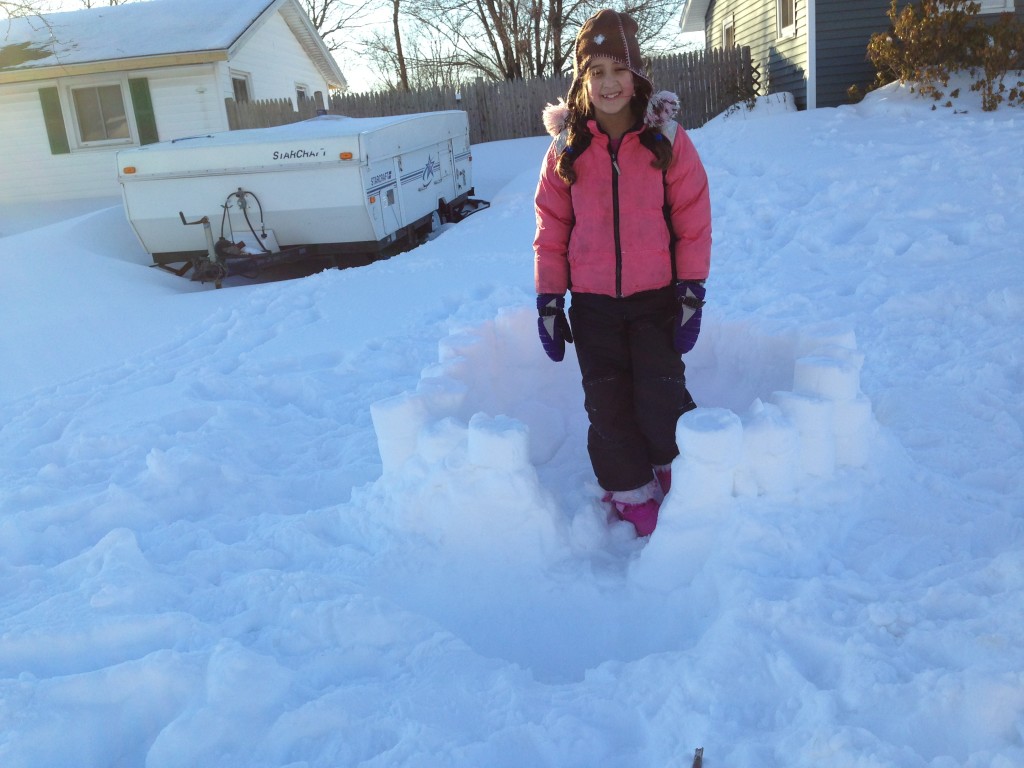