Book Review: The Book of Angels by Marigold Hunt 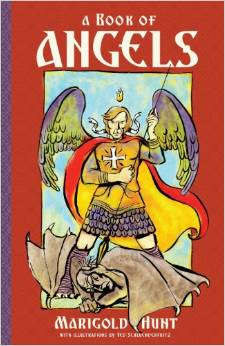 The kids and I have thoroughly enjoyed every Marigold Hunt book we’ve read so far so we were all very much looking forward to this book and it did not disappoint. Hunt is so very good at breaking open the Bible for kids, making it approachable, explaining the context and translating difficult concepts into language and images that kids can grasp, but never dumbing things down, never patronizing or sentimental. A Book Of Angels: Stories Of Angels In The Bible

and The First Christians: The Acts of the Apostles for Children

A Book of Angels begins in the book of Genesis and ends in the Book of Revelation. Considering how often angels appear at key points in salvation history, this thorough examination of the role of angels in the Bible is also an excellent overview of the story of salvation history. Really that’s what this book is: a fantastic Bible story book in the guise of a book about angels. The angles are a hook to keep kids interested. And boy do they ever. This book is aimed at kids Bella’s age (8) and a little older, but my younger three, Sophie (6), Ben (5) and Anthony (almost 4) were all quite engaged. Often it was one of the younger kids asking me to read a chapter. Almost always they begged me to wait to read until they were all in the room. It was a book they did not want to miss. Now they do have pretty long attention spans for their ages and some younger children will be put off by the lack of pictures on each page.

The treatment of the Book of Revelation is a perfect example of how sensitively the book engages children on topics that many people might consider too old for them. The chapter opens with an anecdote about a little boy who wants to see his older brother in a play but the mother thinks it will be too much for the older boy is playing the role of John the Baptist and is beheaded with plenty of fake ketchup gore. The little boy protests that he understands it’s not real and yet when the time comes he does become quite agitated and the mother has to take him out. After the play she takes him backstage and he is consoled to see his older brother not dead but very alive, the blood revealed as ketchup and all is well as the cast members hug each other in congratulations over the completion of a good show. This is what the Book of Revelation is like, Hunt explains, it’s the behind the scenes peek which reassures us that all will be well after all.

The chapter quotes extensively from the actual text of the Bible with helpful explanations, but it doesn’t try to cover everything. It’s just the highlights version. It manages to be exciting but not scary, and led to some great discussions, let me tell you. It’s especially been delightful to talk about with six year old Sophie who gets ecstatic any time we talk about heaven. She asked about the meaning of all the colors and we talked about how much we love to look at colors: flowers and sunsets, Christmas lights and wrapping paper, rainbows and beautiful fabrics. So seeing those colors is just a little taste of heaven and we love them so much because they give us a sense of how wonderful it will be. I like to think I’m raising kids who will have a little more favorable impression of heaven than poor Huck Finn had.

in the car. Also, it was really a nice read for this season of Advent when we not only prepare to celebrate the birth of the Christ Child but also prepare for his Second Coming. I think my children begin to grasp that second idea much more firmly after grappling with St John’s marvelous visions.

Another nice thing about this book is that it covers some stories kids are less likely to have heard or found in their Bible story books: Tobit and Raphael, Job, and the above named Revelation.

, a not to be missed book that is intended for children preparing for their first communion but was likewise engaging for the younger set.

I am quite sad now that we have evidently read all the Marigold Hunt books. I’d love to find out she’d written more which are out of print, but it doesn’t look very likely.