Pin the Tail on the Book Meme
2 comments
Share:FacebookTwitter
booksUncategorized

Pin the Tail on the Book Meme

Melissa Wiley has come up with a new book blogging meme and, well, it’s book blogging, how could I not play along?

Here’s a new game I’ve just thought of: close your eyes and grab a book from your shelves, any book, and then write a brief commentary about it. Or a long one, if you like. I’ve got so many books in my review stack, and so many others (the backlist and midlist titles I love to champion) waiting in my mental queue for some loving attention from me—books I mean to discuss or celebrate or simply wax nostalgic over. (Sarah and Katie, you guys. FOR FOUR YEARS I’ve been planning a Sarah and Katie post. The cover’s been sitting there in drafts staring mournfully at me all this time.)

All those plans create pressure, and pressure, I have found, is the enemy of blogging. So I’m thinking about making a game of it, a game with a challenge built in. I do like a dare. Will I find a few words to say about any book I pluck off the shelf? I suppose I’ll have to allow the caveat that if it’s one of Scott’s books and I know nothing at all about it, I can choose another. And I might need to impose some mild rules upon myself about mixing up the shelves, since our books are sorted into a rough order and I could easily stack the deck by reaching for the favorites on the bookcase next to my desk.

Want to play along? Feel free to chime in below, or on your own blog (and share the link, if the latter). If there’s enough interest I could make a Mr. Linky for it, but I wouldn’t promise to host a linkup on any kind of regular schedule, because promises are pressure and see above. Unless maybe a Mary Poppins kind of promise…when the wind changes… All right, here I go, getting up and squeezing shut my eyes. A bedroom bookcase, since that’s where I am now, but not the one by my desk. 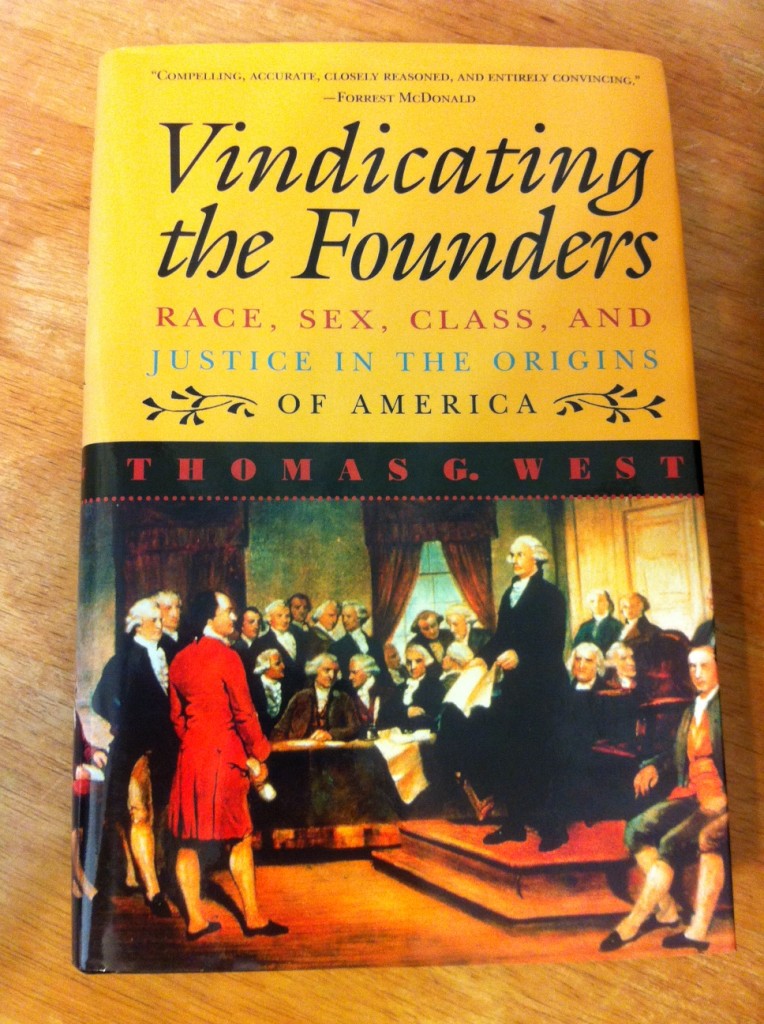 I read Lissa’s post while I was putting Lucy down for a nap and once she was settled I scooted over to the bedroom bookshelf, trying really hard not to look at the books. I reached out and grabbed one of Dom’s books, Grunt Padre. Following Lissa’s helpful rule about excluding Scott’s books, I put it back and grabbed the one next to it, still without looking. And picked a book I bought years ago and have moved two times and have never read. Not even the first page.

Vindicating the Founders: Race, Sex, Class, and Justice in the Origins of America

Dr West was a politics professor at UD. He’s no longer listed on the faculty page, though, and Wikipedia tells me he’s now at Hillsdale college. I never took a class with him, but I remember seeing him around campus in his distinctive straw boater. (That was Dr. West in the boater, right? Or am I confusing him with a different politics professor?) I only took the one politics class at UD because there’s only so much time after all, but I sort of wish there had been world enough and time to get to know all of those professors too. The very idea of all the untapped wisdom I had to pass by at UD sometimes makes me want to weep.

Anyway, here’s this book I’ve never looked at and don’t even remember buying. Was it a review copy? Doubtful. Obtained via Bookmooch? More likely. Or did I buy it in a late night fit of BuyAllTheBooks on Amazon in the optimistic hope of expanding my reading horizons? It almost certainly came into my possession when we lived in Salem, which means either right before or soon after Bella was born. That might help to explain why it never was read. Though to be honest I have many unread books on my shelves.

So now I open the book and read the first sentence: “This book will show that America’s Founders well deserve the respect that citizens and schoolchildren still pay them, but which has long been out of fashion among America’s elites.” Intriguing. A bold stance. A simple thesis. I think this book is at least worth scanning. I scan the introduction.

The confrontation between what I call the Old and the New Liberalism leads beyond the defensive stance with which this book begins. We are accustomed to put the Founders on trial, to ask why it took so long for Americans to recognize the equal rights of racial minorities, women, and the poor. Eventually, we become aware that from the point of view of the Founder’s principles– the principles of the Declaration and the Constitution– the question becomes whether we can justify our own departure from the founding. We will see that our easy assumptions of moral superiority rests on shaky ground.

The scholarship informing this book is meant to be factual and objective. It tries to present a historically accurate picture of the Founders’ real views and policies. But the truth does have implications that bear on the choices facing us today. I have not shied away from those implications.

Jefferson thought that the chief value of studying the past is

rendering the people the safe, as they are the ultimate, guardians of their own liberty. . . . History by appraising them of the past will enable them to judge of the future; . . . [I]t till qualify them as judges of the actions and designs of men; it will enable them to know ambition under every disquise it may assume; and knowing it, to defeat its views.

Jefferson was describing the kind of history that Thucydides and Winston Churchill wrote: loyal to the truth but not afraid to distinguish between justice and injustice, honor and villainy, greatness and degradation. That is the kind of scholarship to which this book aspires.

Yes. Maybe I will read this after all. At least leave it out to dip into a few more times.

I think I’ll just add more quotes below as I read, updating the post. That won’t be confusing will it?

“As we will see, we distort the past when we impose on it our easy assumption that slavery would have been abolished immediately if the Founders had understood the full meaning of the right to liberty.”

So, who wants to join in the fun and explore some books?