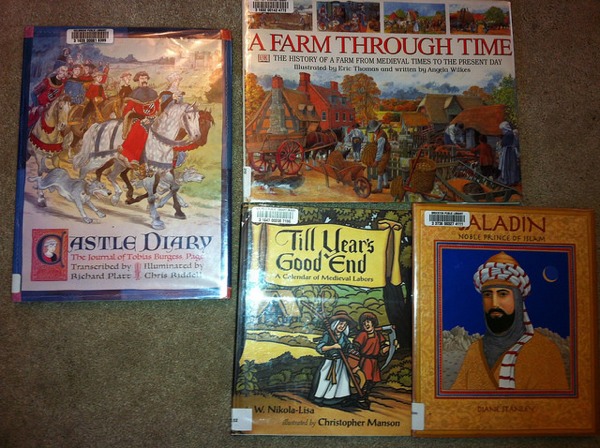 (So slow! This is from last Thursday and I still haven’t posted it. Though I blame the lack of my computer and trying to blog on the maddening iPad for the delay.)

As you can see, our focus is the Middle Ages, and we’re ranging all over the map. Since a friend on Facebook asked how I find the books we read, I decided to include a note on how I discovered each book if I can remember.

The first book is Castle Diary, a beautifully illustrated story of a young page who is sent to live at the castle of his father’s older brother. It takes you through an entire year in the castle, from the point of view of a young boy. He learns Latin, befriends a poacher, helps with the harvest, attends a feast. This is one of the best introductions to life in a medieval castle that I’ve seen. This was suggested in the Story of the World activity book.

Next is another beautifully illustrated large format book, A Farm Through Time, which traces a medieval farm as it changes over the centuries, beginning in 800 and ending in 2000. This was suggested in the Story of the World activity book.

Till Year’s Good End is the story of life of medieval peasants, a page for each month of the year. Beautiful woodblock prints. It did feel a bit redundant after the Farm Through Time and Castle Diary, which both had covered most of the information contained herein, but it is still quite lovely. This was suggested in the Story of the World activity book.

Saladin: Noble Prince of Islam. I suspected this book might be a little… opinionated. Sure enough the Christians are the unprovoked aggressors and the Muslims are ever tolerant and understanding of Christians and Jews. So it’s an opportunity for Bella and I to talk about how history can have a point of view and how authors might not give all the sides of a story or all the information. (As of Thursday Feb 20 We’ve read about half of this and still need to get abck to it.) This was suggested in the Story of the World activity book.

Then our longer read alouds:

Medieval Tales. A bunch of stories from a variety of medieval authors beginning with Chaucer and including selections from Arthurian legends and French tales. What really makes me want to hunt down a copy to own, though, are the illustrations by Pauline Baynes. Oh I do love her work! Found this one on the shelf at our local library. So far I’ve had to preview a bit. Some of the tales are a bit racy. But Bella likes the Arthurian ones especially.

Sword of the Samurai. A collection of samurai stories. It’s fun how the themes echo those in the Medieval Tales: stories of heroism, tall tales, dragons, and the virtues emphasized are similar. On one day we read stories that stressed the importance of obedience for knights and for samurai. Ben really liked this one too. Ever since we saw the samurai exhibit at the MFA we’ve been enjoying picking up books on Japanese life and culture and art. This one is perfect. This was suggested in the Story of the World activity book.

D’Aulaire’s Norse Gods and Giants. Bella originally got a different book on Norse mythology out of the library but it was too dense and neither of us liked it much. So I suggested we take it back and get the D’Aulaire, since we really enjoyed their Greek myths book. Good call. We are liking this much more.

Falaise of the Blessed Voice. I can’t recall how I stumbled across this one. Maybe an Amazon search? It’s a historical novel about St Louis king of France. The copy we have seems to be one of those reprints of something int he public domain, no summary or introduction or anything. But so far the protagonist is a young blind girl who has a beautiful voice. She’s a foundling who encounters King Louis and his wife, Queen Margaret beginning when they wash her feet and those of a blind beggar. I have no idea where the story is going. The copyright is 1904. The author is William Stearns Davis, who sounds like an interesting character from the Wikipedia entry: http://en.wikipedia.org/wiki/William_Stearns_Davis After the fourth chapter, I’ve decided to retire this until Bella is older. It’s not really a child-friendly novel. The main thrust of the story is a plot to prove Louis and Margaret’s marriage is illegitimate so that Louis can be married off again. Blanche is shown to be overbearing and Louis completely under her thumb. The focus is not on his saintly nature, but rather how weak and ineffectual a ruler he is. Which may have been true at that point in his life, but I don’t think it’s a terribly edifying story for a 7 year old. Fortunately the language of the plotters got quite thick and hard to follow. It wasn’t hard to convince Bella to put the book aside for now. We’ll seek out a different life of Louis if we can find one.

El Cid. I think I stumbled across this on Amazon but maybe it was in the in the Story of the World activity book. Not sure we will read the whole thing. I already had to edit on the fly in the first chapter when an argument broke out and the protagonist’s parentage was called into question. Bella doesn’t seem very interested. But I might read it myself because I don’t really know the story except in the most vague outlines.

The Striped Ships a historical novel about the Norman Conquest and the Bayeaux Tapestry. It’s pretty grim and violent, in the first chapter there is much killing and even an attempted rape, not overly graphic but I needed to edit on the fly and it was still a bit much for my sensitive Bella, though I’m really enjoying it. She has refused to listen any further after the first three or four chapters so I’ve decided to just read it myself to see if it’s worth pushing her forward. The heroine is the daughter of a Saxon thane whose father is killed and family scattered when their village bears the brunt of the Norman landing. She and her brother Wulfric set off for Canterbury. On the way they are robbed of their clothing. When they get there, things are tough.

(I wanted to add links and authors and more details, but it’s already been a week. I’m just going to post it already and maybe come back to that if I have time.
) 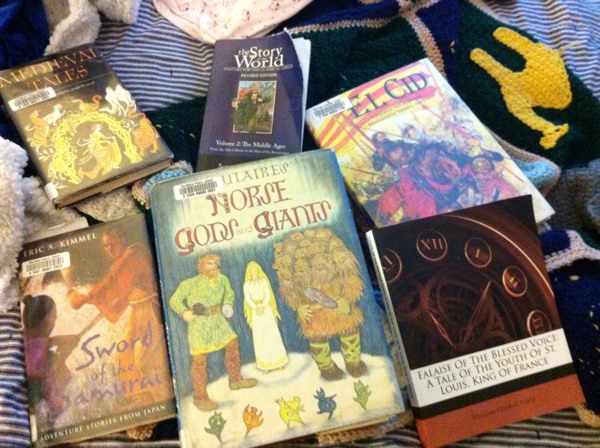