Hansel and Gretel and Courage and the Defeat of Evil
6 comments
Share:FacebookTwitter
books

Hansel and Gretel and Courage and the Defeat of Evil 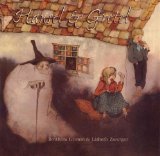 On Friday Sophie brought me Hansel and Gretel

to read as her pick during our afternoon storytime. We sat on a blanket in the sun as the autumn leaves fell and I read to her about two children abandoned by their father who defeat a witch and make their way back home. It’s a very dark story and when I gave it to Sophie for her birthday Dom wondered what I was thinking. In fact the first time I read it I wondered myself as Bella scurried off to hide in the laundry room and Sophie and Ben were both horrified and scared. Mommy Fail! I thought.

And yet in the past seven months they have brought the book to me again and again to read and ponder. They no longer find it so terrifying, though Sophie does often ask, “Are witches real?” But there is something in the story that draws them or they wouldn’t keep bringing it to me. We have enough books that ones they don’t like stay on the shelf unread. There are plenty of books that never see the light of day. 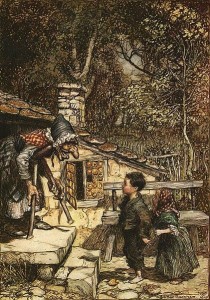 Anyway, this story was fresh in my mind this morning when a friend on Facebook shared an article about a question that a parent found disturbing on a new Common Core aligned worksheet. I really don’t want to get into the Common Core thing here, I only mention it at all because that was the pretext under which this particular bastardization was shared. So the worksheet, which seems to be meant to test reading comprehension, retells the Hansel and Gretel story with modern American names in a contemporary context. And like most contemporary retellings of fairy tales it botches the ending and completely misses the point of the original story. Here you have Peter and Patty:

Peter and Patty’s new stepmother did not like children. She told the father to send them to an orphanage.

Their father loved Peter and Patty very much. He did not want to take them to an orphanage. He decided to tell them they were going camping in the woods… The stepmother sent them off with a smile.

That evening their father sat with them around the campfire and told them how special they were. He reminded them how well they knew and understood survival in the woods.

The very next morning, Peter and Patty awoke to find their father gone. He had left a note wishing them well.

Peter and Patty did not know what to do…They started walking, hoping to find their father. They came upon a cottage made of fresh fruit and vegetables. The sweet lady who owned the cottage adopted them, fed them well and sent them to a good school. Patty and Peter got to have rooms of their own, and they lived happily for the rest of their lives.

I’ve been pondering why Hansel and Gretel, while still terrifying, is somehow less horrific to hand to children than the modernized, sanitized Peter and Patty version. I think Elizabeth Scalia is spot on about the fantasy elements creating a sense of unreality. She writes:

The plotting stepmother of the Brothers Grimm shows up within a broad narrative of abnormality that includes a candied house and a witch. The child perceives the character of the stepmother as being part of a warped unreality, and this can be ironically reassuring to the child: Only in weird worlds are stepmothers automatically nefarious.

From the beginning Hansel and Gretel puts us in another world, opening as it does with “Once upon a time….” That phrase lets the audience know that what follows is a story and exists in an alternate space. I also think the candy house works to counter the terror of the abandonment with wonder and delight. And then the children in Hansel and Gretel are resourceful and brave, as they first find their way back home and then when lost the second time they confront the witch and outsmart her and defeat her.

The outcome of this fear for Hansel was cunning and courage. Without the fear, or the occasion that caused it, there would be no need for valor. There would be no occasion to practice the loving solicitude for his sister that brought about his words of comfort and his shrewd plan to come safely back home. The same can be said for Gretel at the story’s end. With Hansel locked away, she had no one to rely on but herself. The fear she felt for herself and Hansel led to courage. Her courage led her to cleverly avert disaster, and save herself and her brother. Both children reacted rightly to their fear.

Repeated exposure to fairy tales will impart to children the knowledge that fearful situations can be met with courage and bravery. If the minds of children are filled with stories loaded with danger, bravery, heroism and romance, the stories will not only excite and invigorate their imaginations, but also will arm them with the weapons necessary to face their own witches and dragons. As G.K. Chesterton rightly said, “fairy tales do not tell children that dragons exist. Children already know that dragons exist. Fairy tales tell children that dragons can be killed.”

In the Peter and Patty story, on the other hand, there isn’t really any terror to face except the father’s abandonment. There is no evil really except the ordinary human sort and no cunning of bravery are exhibited by the children. They don’t know what to do so they just start walking. There is nothing wonderful or enchanted and there is no happy unexpected reunion with their father at the end. And the stepmother in Hansel and Gretel dies too, which is immensely satisfying. On the whole the fairy tale is a much more satisfactory story with far more scope for the imagination. It’s kind of sad to think that the writer couldn’t see the difference.

Here’s a bit more from Hileman in Crisis:

The dark world of “Hansel and Gretel” leaves the child with a truer sense of reality. It does not represent a world that is always sunny and free of shadows—as do most modern stories for children. It does not create a false reality. The characters are without question either good or evil. The good characters experience great suffering, and are victims of wrongdoing. But they also exemplify great virtue and fortitude that leads to a great reward. The evil character is truly evil, and wishes to violently destroy the good. This fictional representation is very true to life. But perhaps the most important reality demonstrated in “Hansel and Gretel” is one that exists but often goes unseen in the real world—the wrongdoer is severely punished for her misdeeds and there is justice. This is where the violence that so many parents cringe at comes in. Loving, protective parents question the violence. Is it really necessary for our children to read this? Shouldn’t they be spared? The truth is that it is essential to the story and essential to the reader’s understanding of Justice. It would be an injustice if the violent death of the witch never took place. The children would have suffered inconceivable cruelties at the hands of an unpunished offender. Children crave justice. They cannot stand to suffer an injury at the hands of another and see their sufferings go unavenged. There will be times when all children will suffer at the hands of another, stronger person or force. They may never see justice, but—if they read enough fairy tales—they will be left with the true sense that the injury will ultimately be avenged or righted by some invisible, wonderful power that makes all things right.

A critic in the comments of that Crisis notes:

I’m sorry, [I’m on] your side in principle, in practice, 6 months ago, I read two Grimmies to my 4 & 5 year old grandchildren, I realized afterwards it was inappropriate, but then I got a nightmare for my trouble, which I interpreted as a sign from God.

I still love all the free fairy tales on Kindle, Andrew Lang’s Red, Pink, Gold, Green, Blue and Lilac Fairy Books. I’m so happy Chesterton wrote about it. But not for kids.

It seems to me this commenter doesn’t make any distinctions as to what is age appropriate for different children at different ages and stages of development. Now Maria Montessori, for example, agrees that children as young as four or five shouldn’t read fairy tales and other educators agree. They aren’t suitable for the preschool set, perhaps, but that isn’t to say they aren’t suitable for all children. I think they are just right for the older child.

As for me and my house we will avoid all the controversy of updating curriculum and stick to our homeschooling and we will continue to read the hard stuff, the dark stuff. The not really for kids but it speaks to them anyway sort of stuff.