You Will Remember Compassion 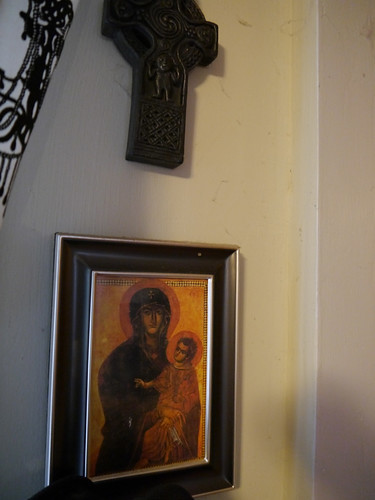 “Even in your anger, Lord, you will remember compassion.”

This week this antiphon jumped out at me. And it has been with me ever since. I have been pondering it. Rolling it about in my mind like a stone int he pocket that your fingers won’t stop touching.

Even in your anger, you will remember compassion.

This is clearly the goal I have to work on.

My greatest failing is anger. My greatest failing is a lack of mercy and compassion when I am in the midst of anger. I have failed to love. I have failed to love because my anger consumes me. And when I am in the heart of that anger I forget compassion. My children’s tears do not move me to pity. I am hard of heart. Cold. Unfeeling. Unloving. Lacking in mercy. Lacking in patience and understanding.

When I read the parable of the Good Samaritan, I’m always the Samaritan. The Jew is usually some hopelessly out-of-touch, uber-judgmental fundamentalist type whom I benevolently aid, despite the aspersions he or she is casting at my nose ring, resulting in said fundie’s eternal gratitude and repentance for being such a hypocrite until I showed them the error of their self-righteous ways.

One day when I was meditating on the Parable of the Good Samaritan, I realized that I was the robbers who had beaten the poor man. Ouch. But then I also realized that I was beating up the poor man because I was wounded myself. I was somehow also the beaten man, needing the healing touch of the Samaritan. I think it’s possible to be all of the characters at once. But I think I like being the beaten man the best. It is only when I realize how messed up I am that I am willing to allow the Samaritan to pick me up and tend my wounds. I’m in no position to go around picking up other poor saps who are hurt until I’ve let myself be healed. I can’t save the world because I myself am in such desperate need of salvation. I can’t even save myself. How can I save anyone else?

Everyone will always be “the Other” to me, until I can accept that the neighbor God wants me to love as myself is the one whom I like the least. The one who makes me crazy. The one who makes me want to jump across the fence or into the computer or through the television so I can dish out a smack-down.

Sometimes the neighbor I like the least, the one who makes me crazy, who makes me want to deliver a smack down, sometimes that neighbor is a small child. A whiny little child with a scraped knee or a hungry belly, or who is tired or thirsty or sick. Why is it so hard to see peace as a viable option when confronted when someone who needs something from me?

In his homily for Saturday’s prayer vigil for peace Pope Francis says:

At this point I ask myself: Is it possible to change direction? Can we get out of this spiral of sorrow and death? Can we learn once again to walk and live in the ways of peace? Invoking the help of God, under the maternal gaze of the Salus Populi Romani, Queen of Peace, I say: Yes, it is possible for everyone! From every corner of the world tonight, I would like to hear us cry out: Yes, it is possible for everyone! Or even better, I would like for each one of us, from the least to the greatest, including those called to govern nations, to respond: Yes, we want it! My Christian faith urges me to look to the Cross. How I wish that all men and women of good will would look to the Cross if only for a moment! There, we can see God’s reply: violence is not answered with violence, death is not answered with the language of death. In the silence of the Cross, the uproar of weapons ceases and the language of reconciliation, forgiveness, dialogue, and peace is spoken. This evening, I ask the Lord that we Christians, and our brothers and sisters of other religions, and every man and woman of good will, cry out forcefully: violence and war are never the way to peace! Let everyone be moved to look into the depths of his or her conscience and listen to that word which says: Leave behind the self-interest that hardens your heart, overcome the indifference that makes your heart insensitive towards others, conquer your deadly reasoning, and open yourself to dialogue and reconciliation. Look upon your brother’s sorrow and do not add to it, stay your hand, rebuild the harmony that has been shattered; and all this achieved not by conflict but by encounter!

“Look upon your brother’s sorrow and do not add to it, “ he exhorts, “stay your hand, rebuild the harmony that has been shattered; and all this achieved not by conflict but by encounter!” Oh I should carve those words on my arm, paint them on the walls of my house. If the harmony has been shattered is it not I who have shattered it? Oh painful admission. It isn’t these terrible kids, it is I.

And yet there is hope, the pope says. It is possible to change direction. We can learn to walk in the ways of peace.

I realized on Saturday that I have a picture of that icon that Pope Francis venerated at the Vigil. I bought a little postcard of it when I studied in Rome my sophomore year of college. I kept that card and after Dom and I were married when I decided I wanted more religious images in our house I put it in a little frame. Right now it is hanging in our dining room near the back door.

I pointed it out to Bella and Sophie and they asked me about it. I told them how Pope Francis went to St Maria Maggiore the day after he was elected and prayed before that icon. How he visited it again after returning from World Youth Day.

They asked me about the icon itself, its history. Bella remembered her coloring book of images of Mary and went to see if that image was in it. It was. Originally brought from the Holy Land by Saint Helen, it has hung in Saint Maria Maggiore from the founding of the church. It is the icon that popes have traditionally paraded around the city of Rome during times of plague and through it Mary’s intercession has brought healing to the city. Perhaps she can also bring healing to our home, to our hearts.