Saint Teresa Benedicta of the Cross 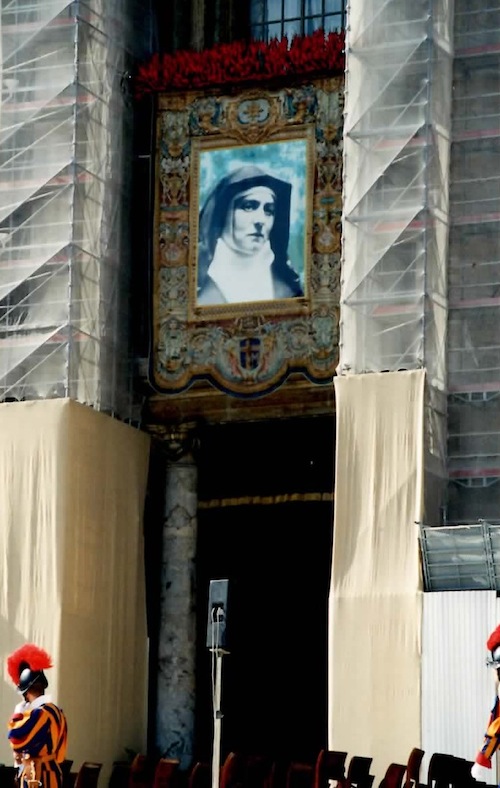 “Whoever seeks the truth is seeking God, whether consciously or unconsciously.” 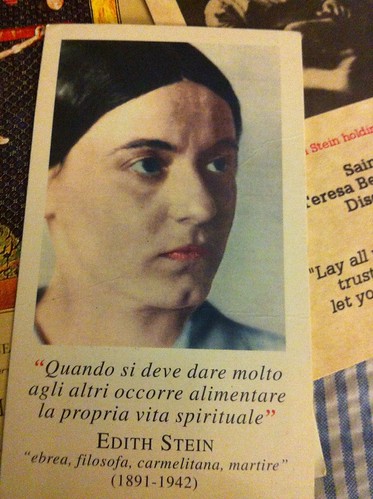 Holy card with hand-tinted photo of St Teresa Benedicta, purchased in Rome at the time of her canonization.

I first encountered her when I accompanied my parents to Rome for her canonization in October of 1998.* She is the patron of my dad’s secular Carmelite community and so he went to Rome as a special pilgrimage. I just tagged along because I wanted to go back to Rome, where I’d spent the spring semester of my sophomore year at the University of Dallas’s Rome Program. But while sitting in the piazza in front of St Peter’s I read about Teresa Benedicta from the program book and I felt an amazing pull. I began to fall in love with her. The first saint I’d ever really felt such a strong personal connection with. I identified with her so strongly as an intellectual woman, one who felt called to live the life of the mind and of academia. And her conversion story spoke to me and her martyrdom, her embrace of the cross. And she became a friend, a mentor, a role model.

Here are some of the passages from the program that spoke to me back then. 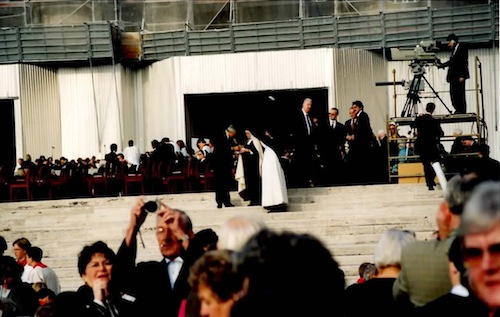 At the canonization Mass, a couple of Carmelite nuns.

During this period she went to Frankfurt Cathedral and saw a woman with a shopping basket going in to kneel for a brief prayer. “This was something totally new to me. In the synagogues and Protestant churches I had visited people simple went to the services. Here, however, I saw someone coming straight from the busy marketplace into this empty church, as if she was going to have an intimate conversation. It was something I never forgot.”

Adolph Reinach’s death in the war and his wife’s attitude to it were my first encounter with the cross and the divine power it imparts to those who bear it. For the first time I saw the tangible victory of the Church, born of her Saviour’s sufferings, over the sting of death. It was the first time that my unbelief collapsed, that Judaism paled and that Christ began to radiate—Christ in the mystery of the cross. 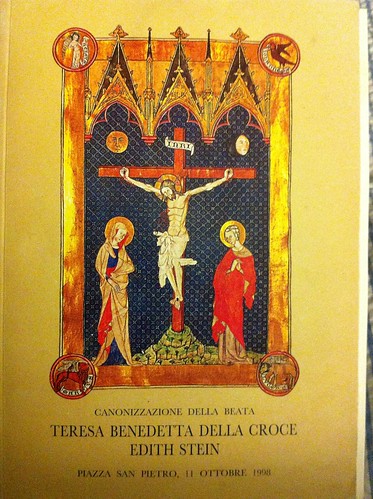 Program book from the canonization Mass. All the quotes here are taken from this book.

In 1938 she wrote: “I understood the cross as the destiny of God’s people, which was beginning to be apparent at the time. I felt that those who understood the Cross of Christ should take it upon themselves on everybody’s behalf. Of course, I know better now what it is to be wedded to the Lord in the sign of the cross. However, one can never comprehend it because it is a mystery.

The darker it gets around us, the more we must open our hearts to the light from above. 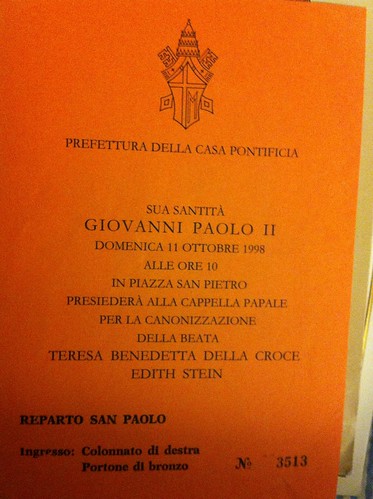 Ticket for the canonization Mass

Those who join the Carmelite Order are not lost to their near and dear ones, but have been won for them, because it is our vocation to intercede to God for everyone.” [. . .] “I keep thinking of Queen Esther who was taken away from her people precisely becasue God wanted her to plead with the king on behalf of her nation. I am a very poor and powerless little Esther, but the King who has chosen me is infinitely great and merciful. This is great comfort.”

On New Year’s Eve 1938 she was smuggled across the border into the Netherlands, to the Carmelite Convent in Echt in the Province of Limburg. This is where she wrote her will on 9 June 1939: “Even now I accept the death that God has prepared for me in complete submission and with joy as being his most holy will for me. I ask the Lord to accept my life and my death…. so that the Lord will be accepted by His people and that His Kingdom may come in glory, for the salvation of Germany and the peace of the world.” 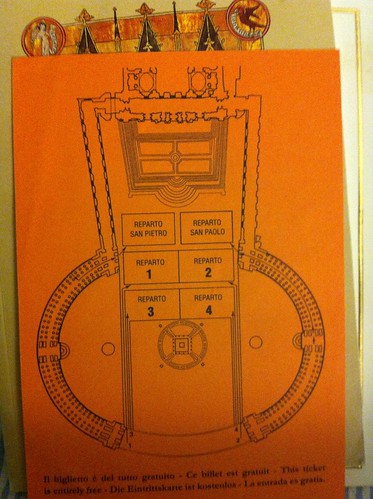 Seating ticket for the Mass. See where it says “Reparto San Paolo”? That’s where we were sitting.

In 1941 she wrote to a friend, who was also a member of her order: “One can only gain a scientia crucis (knowledge of the cross) if one has thoroughly experienced the cross. I have been convinced of this from the first moment onwards and have said with all my heart: ‘Ave, Crux, Spes unica’ (I welcome you, Cross, our only hope).”

Edith Stein was arrested by the Gestapo on 2 August 1942, while she was in the chapel with the other sisters. She was to report within five minutes, together with her sister, Rosa, who had also converted and was serving at the Echt Convent. Her last words to be heard in Echt were addressed to Rosa: “Come, we are going for our people.” 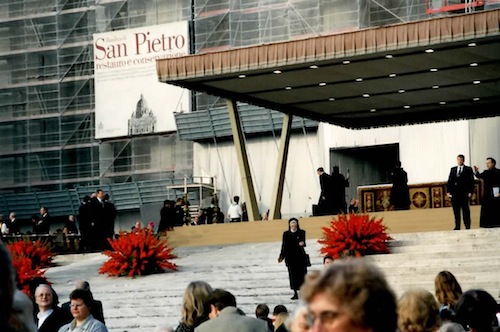 At the canonization Mass, view of the altar.

I wanted to include a photo I remembered of my dad wearing his big scapular smiling on the street near St Peter’s after the Mass, but I’ve searched and searched and can’t find it. Oh well.

*A strange coincidence… the journal I unearthed this morning that I’ve been transcribing from is the one I took with me to Rome in 1998. It has “Edith Stein Oct 11” written on the back cover and a few journal entries from that trip. I started writing this post about Edith Stein and my memories of that trip before I found the notebook. In fact I found it when I went looking for the photo of my dad in Rome. What an odd coincidence that this notebook was on the very top and was the one I peeked in.