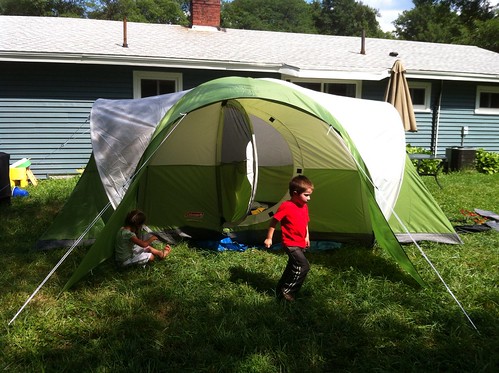 We are now the proud owners of an 8 man tent, which Ben keeps calling a “camp.” Dom set it up in the back yard this afternoon. And promptly four children decided they wanted to camp out tonight.

Anthony was back inside within five minutes. Dom tucked him into his bed but he had trouble staying there without Ben.

Ben lasted maybe another fifteen minutes. Then he needed to be tucked into his bed.

Sophie actually fell asleep outside. Just as I was speculating to Dom about whether she would last the night or would get overheated and wake up disoriented and crying… she appeared in the office door. Disoriented and crying. Dom fetched her pillow and tucked her into her bed.

And then there was one…. Bella dashed inside right as Dom was bringing in Sophie’s pillow, but only to use the bathroom. She reported to Dom that her new sleeping bag is super comfy. And she is Just So Happy. This is a dream come true for Bella. She made it through the night by herself in a tent when she was five. I have no doubt she’ll do it again tonight. Dom says she’s living the Little House dream. That she has mentioned Laura and Mary camping out multiple times. 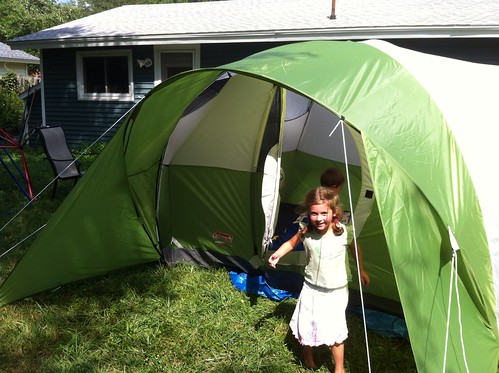 Next week we hope to try it out in Maine. All seven of us. We’ll see…..