This Jesus who has been taken up from you into heaven
7 comments
Share:FacebookTwitter
Uncategorized

This Jesus who has been taken up from you into heaven 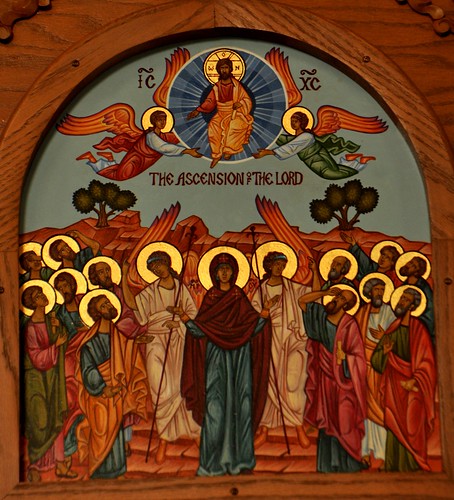 Christ’s going to the Father is at once a source of sorrow, because it involves his absence; and of joy, because it involves his presence. And out of the doctrine of his Resurrection and Ascension, spring those Christian paradoxes, often spoken of in Scripture, that we are sorrowing, yet always rejoicing; “as having nothing, yet possessing all things” (2Cor 6,10).

This, indeed, is our state at present; we have lost Christ and we have found him; we see him not, yet we discern him. We embrace his feet (Mt 28,9), yet he says, “Touch Me not” (Jn 20,17). How is this? it is thus: we have lost the sensible and conscious perception of him; we cannot look on him, hear him, converse with him, follow him from place to place; but we enjoy the spiritual, immaterial, inward, mental, real sight and possession of him; a possession more real and more present than that which the Apostles had in the days of his flesh, because it is spiritual, because it is invisible.

We know that the closer any object of this world comes to us, the less we can contemplate it and comprehend it. Christ has come so close to us in the Christian Church (if I may so speak), that we cannot gaze on him or discern him. He enters into us, he claims and takes possession of his purchased inheritance; he does not present himself to us, but he takes us to him. He makes us his members… We see him not, and know not of his presence, except by faith, because he is over us and within us. And thus we may at the same time lament because we are not conscious of his presence… and may rejoice because we know we do possess it… , according to the text, “Whom having not seen… you love; in whom, though now you see him not, yet believing, you rejoice with joy unspeakable and full of glory: receiving the end of your faith, even the salvation of your souls” (1Pt 1,8-9).

Dom and I took the gang to Mass this morning at the pastoral center, which the kids call “going to Mass at Daddy’s work.” It’s a treat as far as they are concerned. It’s a nice chapel there and a lovely Mass, short but beautiful. All the various nuns always oooh over the kids and plenty of Dom’s lay coworkers too, of course.

Last night I was afraid we weren’t going to make it. Every time I went into the boy’s room to turn out the lights Anthony’s eyes popped open and if I tried to flip them off, he’d cry. Finally around 11 he came out of his room and plopped himself on the office floor. I couldn’t figure out why he wasn’t sleeping. When I asked him if anything hurt he didn’t respond. And that’s unusual because when he had the ear infections he definitely told me his ears hurt. So I gave him some ibuprofen anyway and put him on the recliner in the living room. He didn’t get up after that but did get us up at 6 am, which was probably the only reason I made it.

Didn’t go to Mass? It might not be a holy day of obligation where you are: “Only the ecclesiastical provinces of Boston, Hartford, New York, Newark, Philadelphia, and Omaha (the state of Nebraska) continue to celebrate the Ascension of Our Lord on Thursday.”