I didn’t get my quick takes post done by Friday. Or Saturday. Or Sunday. But by golly I’m not going to wait till this coming Friday to post them. So here’s a bunch of random stuff that’s been going on in the last couple of weeks. 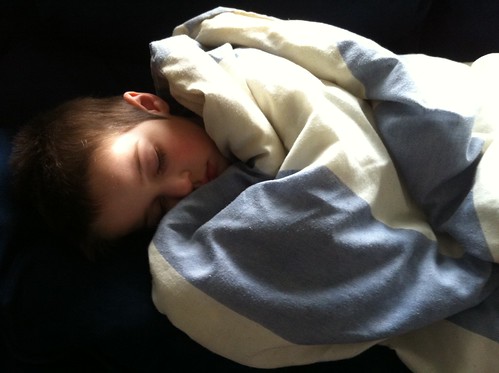 Ben taking an afternoon nap on the couch after a couple of hard nights last week had exhausted him.

I am so not liking that Ben has reverted to his nocturnal wanderings now that my dad has gone back to Texas and is no longer inhabiting our couch. It turns out it was only my parents in the living room that were keeping Ben in his bed. Last night he woke me up about six times because of bad dreams. Once I had to tuck him back in. Once he wanted to move to the couch. Then back to his bed. Then back to the living room but this time onto the recliner. Then he needed his crucifix and St Benedict medal because he’d had another bad dream. 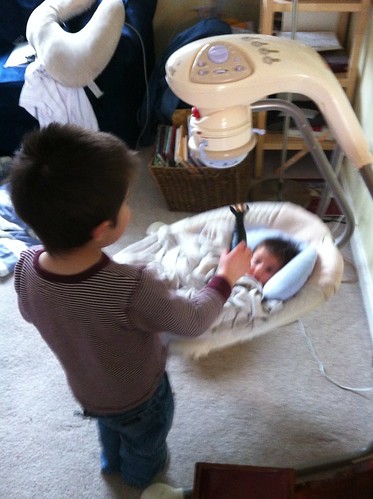 First Ben draped his treasured blankets over his sister. Then entertained her with a toy goat. 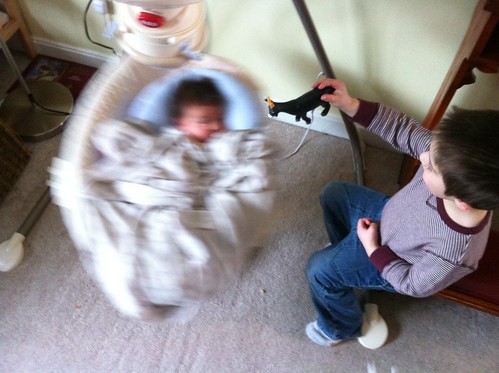 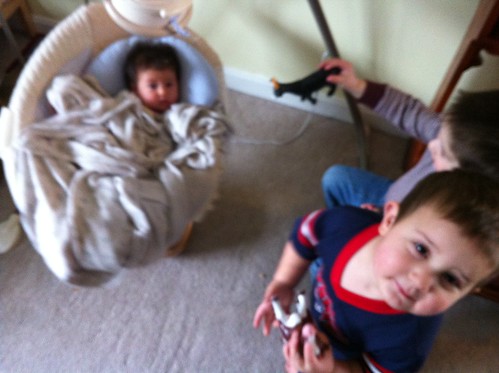 Anthony joined in with a cow 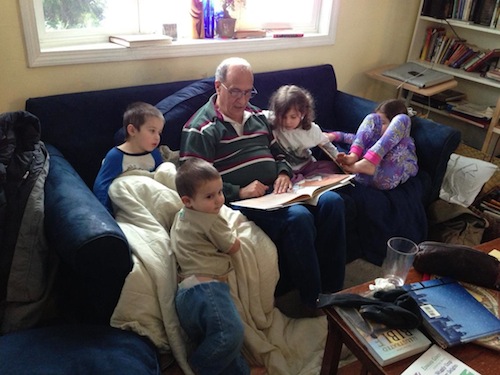 My dad left two weeks ago and I still haven’t even written about him being here. As usual I got too few pictures. Two snaps of him with the big kids. Sadly, none of him holding Lucia, his darling little girl. Every time my parents come I think: I’m going to get more pictures this time. But somehow I never do.

Dad did his usual fixing up while he was here. The girls’ room is now a pinkish-purple that they adore and I’m resigned to tolerating. (It didn’t look nearly so pink on my computer screen.) He also touched up the paint in the living room where the kids had chipped it and painted the frame of the new front door my brother-in-law installed for us around Christmas time. 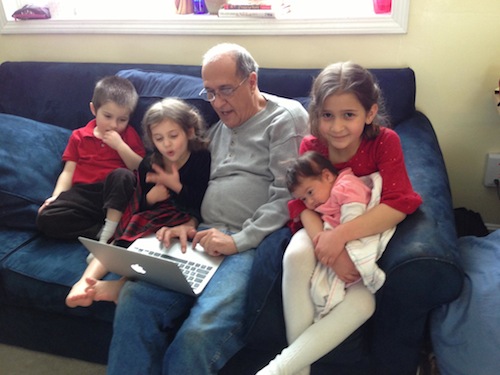 I love having my parents here but my introvert heart is a little happy to have the house back to myself and the kids during the days. But I miss having someone to help do the dishes and help with the shopping and of course everyone missed having Grandad around to read to them and tease them. The day he left when I was setting the table for dinner Anthony patted the table and reminded me I needed to set a plate for “Gan’Dad.” 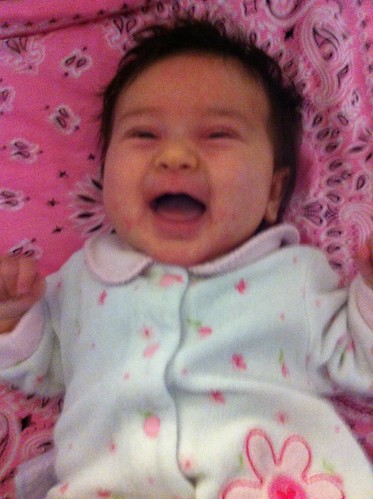 Definitely the happiest baby on the block

Lucia has settled in to a nice routine. Much more routine-ish than any other newborn I’ve had. She sleeps a lot and seems to think that night is between midnight and noon. She usually goes to sleep sometime between about 11pm to midnight. She wakes around three or four for a midnight snack. She may eat again between five and six. Then I put her down in the bassinet or swing while I get breakfast and do school with Bella. Then she perhaps has another snack around 9. Then she generally sleeps till about noon or even 1 or 2 some days, waking up after lunch right around Anthony’s nap time so I can nurse her while putting him down for his nap. It’s very handy in that I don’t have to tweak my morning routine much at all for school or errands. It’s a bit hard when she wants to have a cluster feeding session right when I’m trying to make dinner and get the big kids to bed; but even that is a minor annoyance.

The joy of homeschooling: When math got too frustrating this morning, I put on some music—The Pogues, Matisyahu, Beausoleil, L’Angelus, The Chieftans, Benny Goodman—and the kids danced in the kitchen while I switched the laundry and swept the floor. Then, having got rid of some of the excess energy, Bella was ready to go back and try again.

Then I had to sit down to nurse Lucia so I figured Bella would give up without me there to encourage her to push on. Instead, I noticed that Sophie was riding herd on Bella making sure she actually finishes her worksheet. “No, you’re not done yet,” Sophie would say as Bella got distracted, “One more….” She did it again and again, counting to make sure Bella really had colored in the correct number of boxes. It really is cute. And it frustrates Bella less than me doing it and gives Sophie math practice too. Sophie loves worksheets but I’m torn between continuing to let her just sponge off of Bella’s lessons or letting her start doing her own math lesson every day. She can’t quite make up her mind either. I think she likes the idea of having her own work but she also likes tagging along with her big sister.

Somehow doing math worksheets makes Bella want to draw. Once she’d finished with the page to Sophie’s satisfaction, she set to work on this super elaborate drawing she’s been working on for days. Here’s a row of shops and restaurants with ladies shopping and their daughters, Linnis and Agnes.  And, says Bella, Jeannette is the girl at the table. 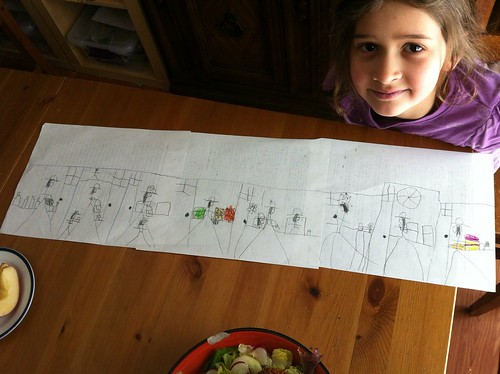 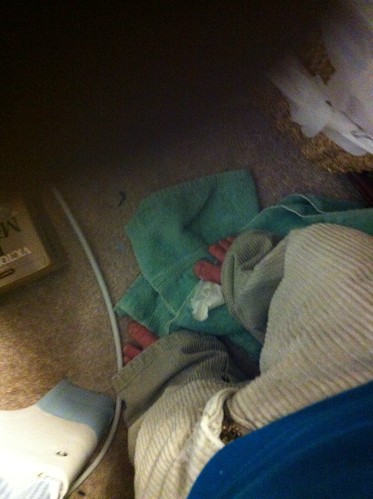 I found this picture on my phone, evidence that Anthony had picked it up and figured out how to use the camera.

And while we’re on the subject of Anthony getting into things…. 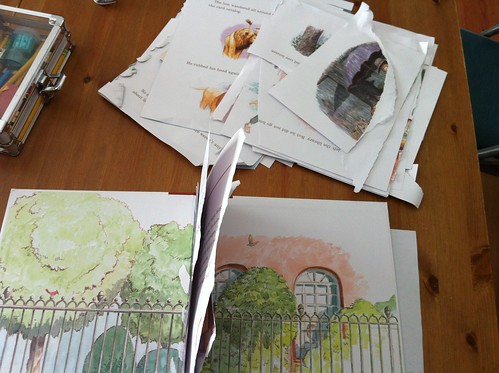 . I was much too upset to snap a photo of the carnage, pages strewn all across the floor. So I had to go back and document the damage after the fact. I’m not even going to try to tape it back up. I felt sick to my stomach. This was one of my favorite books. 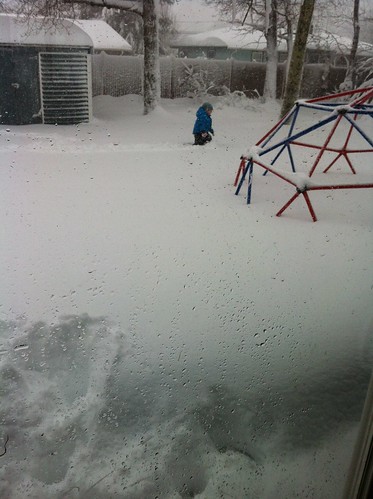 The weathermen forecast 2-4 inches of snow, but said that this storm was hard to predict. We got about two feet, as much as we got in the big blizzard. 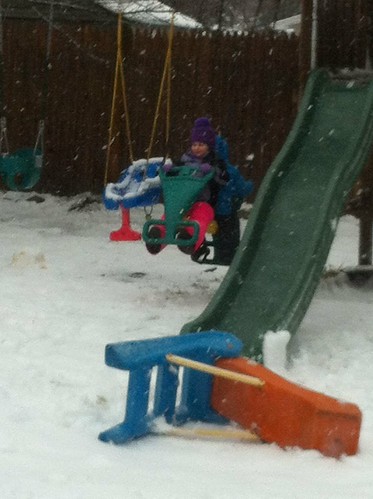 Sophie and Ben went swinging while the snow fell and the winds raged.

I finally figured out how to keep the kids’ feet dry after their boots have gotten soaked: plastic bags from the grocery store put on over their socks. Why has it taken me so long to think of that? 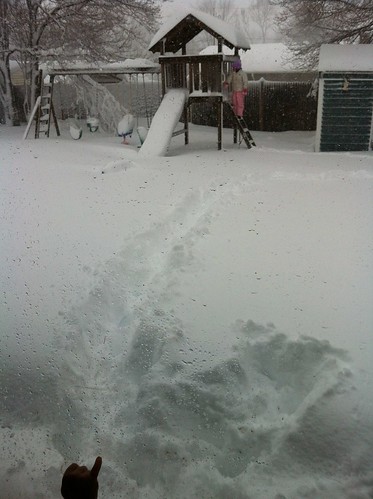 Bella loves being out in the snow. Tramping through snow and mud puddles: that’s her idea of being outdoors. 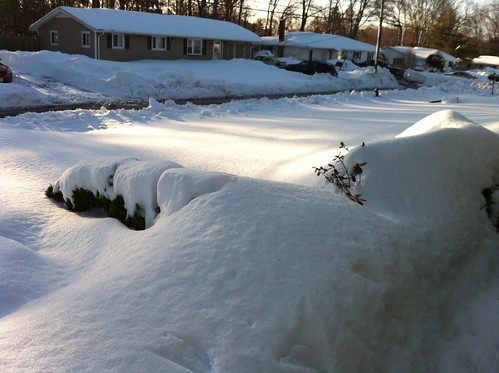 That lump in the foreground is our poor little tree, weighed down under the snow totally horizontal. 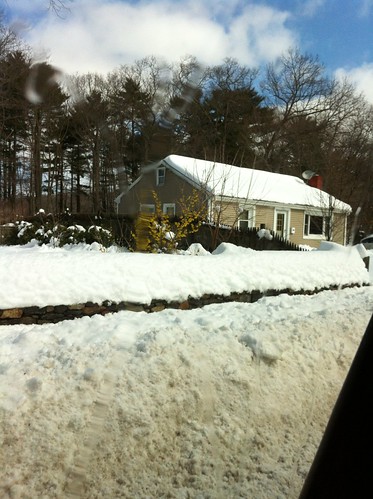 Forsythia blooming in the snow. Does that mean spring is coming or is doomed? 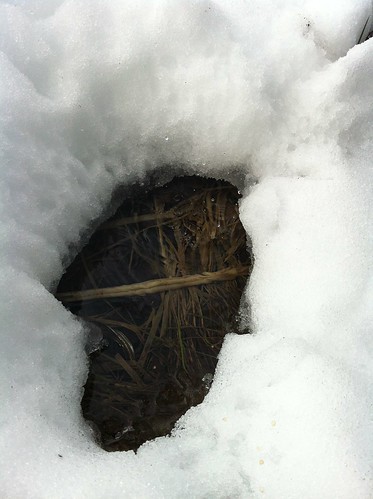 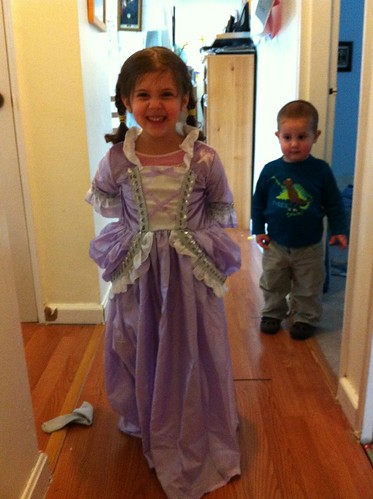 My parents got Sophie this beautiful princess dress for her fifth birthday. 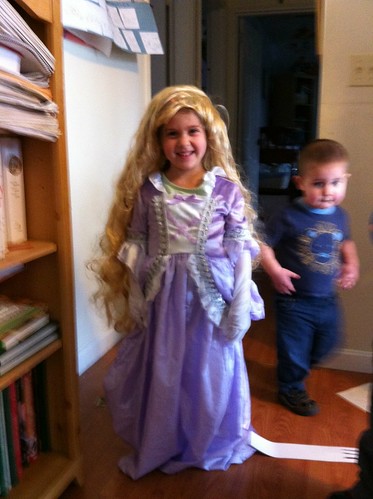 Then the wig and gloves arrived the next day.