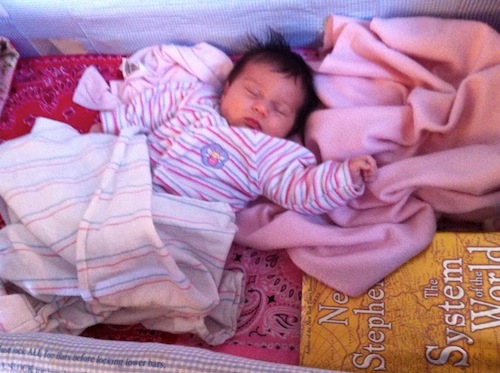 After I put Lucia down in her bassinet, I realized I’d parked my book there. She didn’t seem to mind.

Other book-related goals for the year include reading Les Miserables. All the recent furor over the movie has made me acutely aware that I’ve never read it—except for a few abridged scenes we read in one of my French classes. (This was the great article about a man who was so inspired by the character of the bishop that he became a priest that really makes me want to dive in.) Last year’s big classic that I tackled was Middlemarch. The year before was The Brothers Karamazov. I think this is definitely the year of Les Miserables.

by Neal Stephenson The first volume in The Baroque Cycle. Began Volume 1 at the end of 2012 and finished in the hospital after Lucia’s birth.

This is series of historical novels is a departure for science fiction writer Stephenson. Or is it?  On the classification of the genre, Stephenson is delightfully playful, suggesting that there is something science-fiction-ish about them. Certainly there is a great deal of science, but there is also mystery and intrigue and alchemy. Sir Isaac Newton and Baron Gottfried von Liebnitz are both characters and there is a great deal about 18th century natural philosophy/science. It’s an interesting time when scientists straddled the line between alchemy and chemistry, sometimes what they did involved a lot of magical thinking even while they were trying to find rational answers. Also, they aren’t strictly historical as Stephenson has also created a fictional Celtic island nation, Qwghlm, off the coast of England that is something like Ireland and something like Wales.

The Baroque Cycle is a sort of prequel to Stephenson’s Cryptonomicon, which I read last year.  There is one character who appears in both, a mysterious minor character who is apparently very long lived. (I’m not done with the series, but there has been no explanation so far for why he is. That’s kind of bugging me. I want answers.) Several other characters in The Baroque Cycle are direct ancestors of characters in Cryptonomicon.

Now that I’ve got quite a few Stephenson novels under my belt I’m starting to get a sense of some of his preoccupations that he revisits time and again. One of the is economics, particularly the question: what is money. This probing into how and why money works is a major theme of Cryptonomicon and The Baroque Cycle but also appears in The Diamond Age and even to some extent in Anathem. Stephenson explores how political systems, technology, theories of knowledge, and the exchange of information all come together and shape the economic system.

The Baroque Cycle has a huge cast of characters and literally ranges all across the world as one group of characters circumnavigate the globe in Book 2. The major trio are Daniel Waterhouse, a natural philosopher; Jack Shaftoe, a vagabond adventurer; and Eliza, who is hard to pigeonhole with a title as she has her fingers in political intrigues, economics, natural philosophy and just about everything else.

. really this has been a perfect novel for recuperating from surgery. If I have to spend days idling around not doing much, then at least I have a good book to see me through it.

—not yet finished. I’m about two thirds of the way through this almost 900 page novel.

Also in progress, several non-fiction books which are getting slight attention as I push to finish the Stephenson, which are borrowed from the library and due back next week:

4. Signs of Life: 40 Catholic Customs and Their Biblical Roots

This is the kind of book you can pick up and put down as each chapter is a stand alone piece about a different Catholic custom.

5. Forming Intentional Disciples: The Path to Knowing and Following Jesus

I am definitely going to have to write a separate blog entry about this book when I finally finish it. I keep thinking back to this conversation from the end of last year, summed up in this post: Motherhood Isolation and the Mystery of Christian Brotherhood. This book addresses many of the questions and concerns that conversation raised and then pushes me to a whole new level of thinking about them.

6. My Sisters the Saints: A Spiritual Memoir

I saw Elizabeth Duffy’s review and it made me want to read this book. The first couple of chapters have really grabbed me. I put it down but will definitely pick it up again when I’m done with my library books.

Melissa Wiley recommended this one. So far the first couple of chapters have convinced me that the only way to get my kids to eat like French kids would be to move to a small village in France and enroll them in the local school. So much of what Le Billon describes is so particular to French culture, I’m not sure that I can pull many lessons from the book to apply to our situation. Still, I’m going to read the whole book and think on it for a while. Probably the period when I’m recovering from major surgery and adding a new baby to the family is not the best time to read a book that makes me want to overhaul the way I approach food with my kids. I am rather helpless right now to do more than just get everyone fed and frankly if the kids are eating mostly grains and meats right now and are not being super adventuresome… well, this isn’t the best season to address it anyway. We always do much better on the fruit and vegetable front in the summer and fall when we’re going to the farmer’s market every week. Winter in new England isn’t the best time to inculcate adventuresome eating. And yeah, I should maybe have waited on this one until a different season.