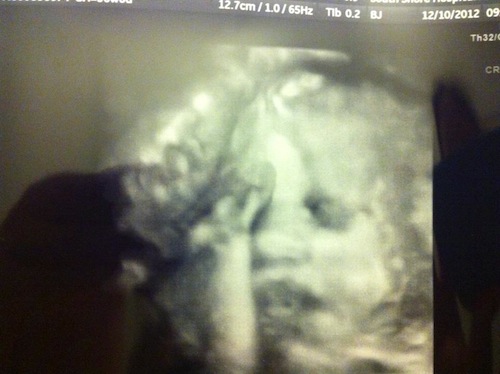 Lucia at 36 weeks. Taken this morning.

And now for something less thoughtful than what I’ve been writing of late and far less beautiful than my gorgeous little daughter there with her hand up to her face. (Sorry for the blurry camera phone snap of the ultrasound picture.)

I need to let off steam in hopes of avoiding a repeat of last night’s 2am insomnia in which I lay sleepless in bed for who knows how long (after Anthony’s now-customary wake up) fuming about my frustrations with my OB’s office.

Here’s the thing. I am now at my fifth obstetric practice in seven years. Yep, every pregnancy I have carried to term has been with a different obstetrician in a different office. Just when I think I’ve gotten the hang of things, I have to get used to a whole new way of doing them. And it’s amazing how very different each practice has been. However, I have to say that hands-down this is absolutely the worst experience of the whole lot.

You see this is a big practice and they don’t believe in assigning a doctor to a patient. Instead, you just go see whatever doctor is available (or midwife if you’re going that route; but since I’m destined to have a c-section I figured why bother). I absolutely hate that. It’s like going to a restaurant that refuses to assign you a waiter, instead leaving you to the mercy of whoever happens to be free at a given moment. It doesn’t result in more efficient service, it’s just plain chaos. Well, maybe it could work if all the doctors were meticulous in their charting and excellent communicators; but what I’ve found is that I feel I’m caught in the middle of a maddening game of Telephone where the message that is being garbled is not just a silly little catch phrase but has to do with my health and the health of my baby girl.

So far I’ve seen I don’t know how many doctors. The most times I’ve seen any one doctor is twice. I have no relationship with anyone in the office, not even the receptionists, who by this time in every other of my pregnancies I knew quite well (Well, honestly, the ones at the last OB were never very chatty or friendly but at least it was always the same two women every time and I got rather used to their unchatty ways) I feel like a cog in a machine a chart not a person. Oh the doctors are all very nice and friendly and smiling; but none of them know me. Moreover, I don’t feel I have any real continuity of care. What one doctor tells me, another seems to contradict. One will casually mention something about my pregnancy as if of course I’ve discussed it with another doctor many times when it’s the first time I’ve heard of it. Maddening I tell you.

Take the ultrasounds for example. After the standard one at what is it around 20 weeks the doctor said they wanted to do a follow up because the placenta was attached to the front of my uterus and they were worried about it adhering to my c-section scar. They mentioned nothing about multiple ultrasounds, just a follow-up. When I went in for that follow up at the hospital, the doctor I saw there acted as if a follow-up a month later was a matter of course. But then the next doctor I saw in the office said nothing at all about the ultrasound, either the one they had taken or about having one in the future. Instead, she seemed mostly concerned about my heartburn and then when she realized I needed a blood draw to check my thyroid level she rushed me out of the exam room and to the phlebotomist’s office before even asking me if I had any questions for her. Then the office called me to ask why I hadn’t gone to the ultrasound. And then they rescheduled it for a time I had specifically told them I couldn’t make it so I had to call the hospital to reschedule it. And then next time I saw a doctor she didn’t mention the placenta at all but blithely assured me they were doing monthly ultrasounds because of my advanced maternal age and the number of my previous c-sections. When I asked her about the placenta, she said, oh yeah that too. And then today at the hospital the doctor who looked at the ultrasound said essentially that they couldn’t tell anything much about whether there was any placental adhesion from the ultrasound and they wouldn’t really know until they cut me open. And she wanted me to come back next week for a follow up ultrasound because my amniotic fluid level was slightly low. I’m feeling like a sack of potatoes being flung about here and there and no one seems to think they owe me a complete explanation of what they are doing much less an actual consultation about my care. As if I had no more input on the choices being made than a dog can give to a vet.

Does that seem hyperbolic? Well, I’m pregnant and frustrated and feeling a bit hyperbolic right now. I just want to have one doctor. And, in fact after, I ranted to the office manager, they assured me I could schedule the rest of my visits with the doctor who is scheduled to perform my c-section (I met her for the first time two weeks ago, which was AFTER they had scheduled her to be the one to do the procedure.) However, the reality is that she only had one appointment available this week and that during a time that Dom absolutely can’t get off work. So I’m going to see another doctor I’ve never met before.

All I can say is that if I do get pregnant again after this I will move heaven and earth to find a different obstetric practice. I am fed up with a practice that doesn’t care enough about me to let me have a human relationship with my doctor—the doctor said they were just too big to do that. Heck, they can’t even manage a competent system of managing communication for scheduling follow up visits. This is the first office I’ve ever been to where there is no paperwork to hand to the receptionist as you check out which will tell her what follow ups she needs to schedule. No, there is only a verbal instruction which I am supposed to convey to her. And if I misremember or misunderstood what the doctor intended? Who knows. The doctor said something at my last visit about scheduling nonstress tests but the receptionist didn’t say anything. Was I supposed to schedule them then? Are they going to contact me in the future? Who knows. My attempts to get clear answers from the office staff have been futile. I have to wait until I see a doctor in the office, who may or may not clear up the confusion. So far my bets are on not.

And yes, I’m sure a huge part of my frustration is simply the suspicion that all the extra tests they want to run on me due to my “advanced maternal age” are more about getting extra money out of me than a need for extra caution. There haven’t been any indications so far that Lucia is anything but the picture of health nor have I had any problems except for the placenta which may or may not be adhering to my scar and which the ultrasounds may or may not have been intended to keep an eye on.