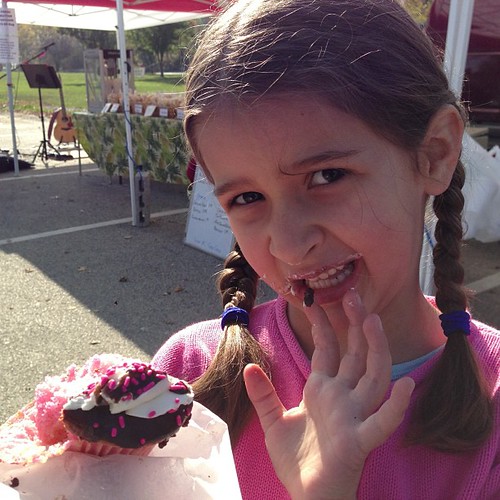 Bella got this cupcake at the farmer’s market on Saturday. Yum!

We started with David Macauley’s Pyramid to go with our study of Egypt. Then Bella wanted to read Cathedral and Castle as well. I don’t know how much she grasps of them; but I love that she will sit through the whole book and that she is so absorbed. Nowadays she rarely asks for a story at bedtime. It’s almost always one of her current non-fiction reads. She’s also loving the Eyewitness books on Archaeology and on Rocks, Gems and Fossils.

Yesterday we spent some time looking at Google satellite views of the Nile River and the Great pyramid. Fascinating to see how Egypt is still a land of green and brown dominated by the river’s course. Bella loved seeing that the pyramids are still there.

At her age, I’m less worried about Bella’s education meeting some kind of curriculum content and most concerned with her having a sense of wonder about the world and a desire to ask questions and seek for answers. She’s got that in spades, so even on days when I don’t feel like we’ve done much “school” stuff, I feel like we’re still ok. 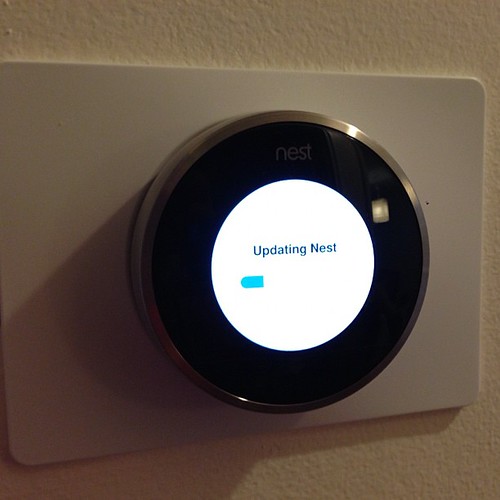 My husband’s geekiness must be rubbing off on me. I am geekily excited about our new thermostat. It’s the Nest Learning Thermostat, which he got for free to review through the Amazon Vine program. It’s internet -connected so it can change depending on the weather and you can even adjust temperature remotely via an app on your phone. When I’m nursing a sleeping baby, I won’t have to get up to change the thermostat, for example. It learns your heating and cooling preferences over time so you don’t have to set up approximations of what temperatures you want at various times, you just adjust it to what feels comfortable at the time and if you do it often enough it learns that as the default. It was designed by guys who used to work for Apple and helped design the iPod. This article tells a little about the design. 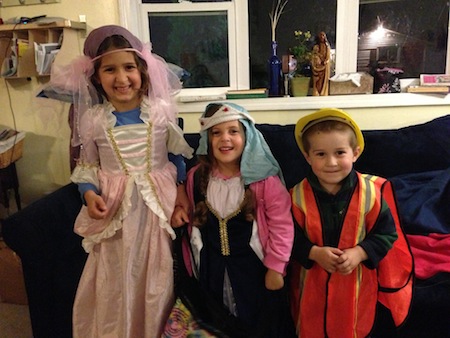 Two fairy princesses and a construction worker; costumes scrounged from the dress up bins. Anthony did not have a costume and stayed home with Dom to hand out candy.

I forgot to buy pumpkins last week. Oops! Somehow the week before Halloween seems just too far away and I fool myself into thinking I still have all the time in the world. So we had no Jack O’Lanterns this year. I seem to average about every other year. I suppose I’d better get on the ball next Halloween.

I also did nothing with all the fabric I bought to make saints costumes. Anthony’s fever last weekend and his subsequent refusal to sleep at night really wiped me out. Not to mention the excitement of Sandy being a bit of a distraction. Maybe I’ll get them done for next Halloween.

I think we’ll skip the Saxon math lesson where we make a graph of the eye color of everyone in the family: brown, brown, brown, brown, brown, brown. (We also skipped the hair color one for the same reason.) In fact, we’ve been skipping quite a few lessons in Bella’s math book and are now in the middle of December’s lesson plans. This despite the fact that we missed two weeks of school work in September when we went to Texas and another one in October when everyone was sick. I was hoping it would play out that way since I started Bella in the Saxon K book, feeling like she wasn’t quite ready to jump into first grade work. I’m hoping to finish with K and go on to the first grade book by the end of the school year. We’ll see whether Lucia’s arrival wreaks havoc with my plans. 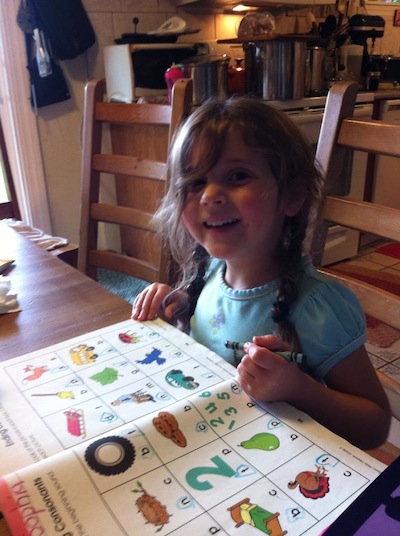 Sophie loves doing pages in workbooks while Bella is doing math lessons. She’s worked her way through the whole alphabet in two different books. Bella never really liked doing workbooks; but Sophie is very diligent. Its always her idea to pull out the book and she only ever does as much as she wants to do. Some people think workbooks are terrible busywork to give to children, and I sort of tend to agree for older kids. I’d never assign workbooks. As far as I’m concerned they are fun activities that just happen to also have an educational component. Preschoolers often love them and they help me with providing structure for my pre-reader who wants to learn her letters and wants to have school work to do. 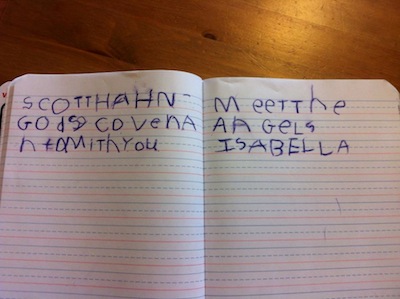 Bella, on the other hand, much prefers copying words off of book covers to practicing her letters in a workbook. I’m happy with whatever gets her writing. Here she copied words off of two coloring books we have (I helped her to sound them out so she knew what they said) and she also copied her own name at my insistence. She still doesn’t recognize it when she sees it written and so I’m trying to get her to have sight recognition.

Bella’s new alter ego is “the dancer, Flabelle Marie.” Where did she come up with that name?