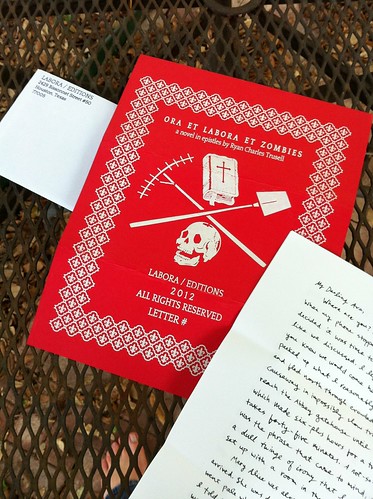 When Dom came home from the CNMC (That’s the Catholic New Media Conference, which was held in Dallas last month.) he was full of all sorts of stories and he’d brought home a pile of books and some other cool conference swag. But by far the most intriguing thing he pulled out of his bag was this innocuous-seeming fat white envelope with a return address stamped in the top left hand corner: LABORA/EDITIONS it read. Dom told me that the envelope contained the first chapter of a new epistolary novel. A Catholic zombie novel. With Benedictine monks. How could I not be intrigued?

This guy is writing a serial novel in letter format and actually mailing each chapter out to his readers individually at a rate of one a week? How absolutely awesome a concept is that? (And I love that he was marketing this old fashioned idea at the New Media conference.)

Still, me being me I left the envelope sitting, unopened on the shelf for more than a week. This did not signal disinterest on my part but rather an odd need to somehow extend the anticipation a little longer. It would be rather like waiting for the letter to arrive. Somehow it just never seemed quite the right time to fully savor the experience of reading the first letter. I finally slipped it into my bag to read on the plane to Texas, which seems rather fitting since the author, Ryan Charles Trusell, lives in Houston. Somewhere in the air between Boston and Austin, I slipped my finger into the envelope and carefully eased it open. I unfolded the letter and took a sip of my cranberry juice. The cover was a thick, red cardstock weight printed in white. A pattern of fleurs de lis surrounded a large logo of a crossed rake and shovel with a Bible and skull in the upper and lower quadrants of the X. Pretty!

The papers the letter was written on were nice and thick. It reminded me a bit sadly of the days before I was married when I regularly sent out fat handwritten letters to my friends and family that were four, six, even ten pages long. I always felt that the paper mattered and the handwriting mattered. Writing letters was a creative outlet and in a way the creation of a work of art. I never seem to find the time any more with all the little ones and their constant demands. All the more reason to adore the idea of getting this kind of fat letter in my mailbox. It reminds me a bit of the Griffin and Sabine books (does anyone else remember those?) except with the added bonus of really truly having the letters arrive in the mail.

As for the story itself… well I’ve only read the first letter; but it was enough to make me want to read more. So far it’s a classic story of a husband and wife separated by a disaster. It had one laugh-out loud on the plane moment. I love the little touches of liturgical time so far like that the story begins on the first Sunday of Lent—and that Tom’s phone stopped working at noon on Friday. And, as one other blogger pointed out, the project launched on the Feast of the Assumption and will wrap up on Christmas. Talk about uber-Catholic geeky!

I wanted to write more but I keep getting interrupted. I suppose it’s enough to say that Dom and I are definitely in. You can check out the official website here: Ora et Labora et Zombies. And I can send you to several other blogs that all say it better than I do anyway:

Tom and I had the distinct pleasure of meeting Ryan Charles Trusell, the author of these Zombie Letters, yesterday at the CNMC. A more pleasant lunch I have rarely had than eating over-priced box lunches while getting to talk conversion stories, Firefly love, Flannery O’Connor love … well, you get the picture.

He’s my kind of people.

I’ve just gotta say that I love someone whose eyes light up telling me about the book binding class just completed and whose contact page has “mail always welcomed” and “emails tolerated” information. He’s not a crank. He just loves beautiful things. What could be more Catholic than that? Go. Visit. Tell him hello … I bet in this case he would welcome an email.

I’ve had the idea since the summer of 2010, which I guess is about a year after Pride and Prejudice and Zombies came out, to which my title is of course an homage. I had no plan whatsoever to write anything pop-culture relevant. I am a sucker for Benedictine spirituality. I had just visited Belmont Abbey in North Carolina, had spent some time in the Adoration chapel, and was driving around town and saw a large, outdoor statue of the Sacred Heart, but for some reason the arms on the statue looked wrong. Instead of the usual gesture of open arms, or one arm open and one hand pointing to the Heart, it looked to me as though both arms were stuck straight out in front, in the Karloffian manner. The phrase popped into my head: Ora et Labora et Zombies! It was good for a laugh, and I thought about trying to turn it into something, but really it just sat there in the back of my mind for a year, fermenting. Eventually, out of necessity, I figured out how to tell the story.

The Anchoress: “A New Experiment in Old Media”:

these snail-mailed letters, these beautifully hand-printed covers are a sort of reclamation of something we have lost — a willingness to slow down and to wait for something; the notion that there really is something worth waiting for, anymore; the spiritual uplift that comes when we encounter a beautiful thing, simply done, and a simple thing done beautifully. Trusell is reaching out through the impersonalized ether of the internet and saying, “let’s reclaim a sense of the personal. Look, I’m sending you my story, my artwork.” In an age where people seem so disengaged, so lackadaisical about their work, there is something really heartening about a young fellow so willing to do things carefully, and with such an obvious love of craft.

“Zombies Are Like Garlic, You Can Never Have Enough of Either”—Leah Libresco weighs in.