Not Without Tears
8 comments
Share:FacebookTwitter
Uncategorized 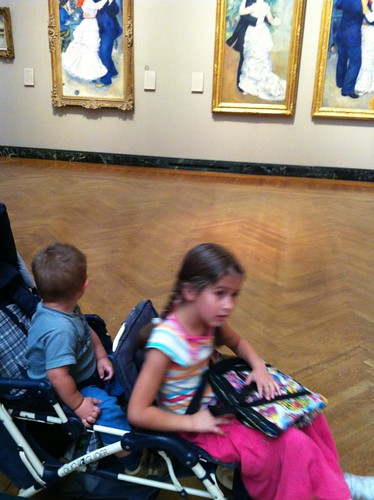 Today Melissa Wiley writes about her six year-old’s “first” day. It’s very interesting reading to me as we’re slowly, rockily feeling our way into our first “high tide” season. (We did a science lesson last week. Yesterday we began with a formal math lesson and some handwriting practice as well as our usual pile of literature. Today we did math and handwriting and began history with the Introduction to Story of the World Part I.

I abhor comparisons and really I’m not trying to compare our way with Lissa’s except that I do have a little twinge of envy when she writes:

Rilla, an extroverted child, delivered her first narration with glee. I explained that some mornings, one of her sisters will read her a story, and she’ll come tell me all about it.

“That’ll be my favorite part,” she said, matter-of-factly.

Some days, it will.

It’s just that the contrast with a moment we had this afternoon happens to be a bit stark. That was when I asked Bella to narrate a part of her history lesson and my usually garrulous girl burst into tears. And then more and more and more tears followed as I tried to figure out why the simple question, “Tell me one thing you remember from what I just read,” should provoke such a response. This from the child who will voluntarily launch into a soliloquy with no prompting from Dom or I, regaling us with details from a chapter of a book that I read to her three weeks ago. Details I don’t remember and which I’m half-tempted to fact check because how can anyone remember such little niggling things?

Well, after my unsuccessful attempts to suss out exactly why she was crying, I decided to let her have a rest and went to scrounge up some lunch for myself. Not five minutes later her little sister burst into tears at something equally innocuous and more used to Sophie’s low-sugar mood swings I immediately diagnosed her problem as hunger. Aha! Perhaps that was why my narrator wouldn’t narrate? Indeed. After a round of graham crackers with peanut butter and some apple slices she willingly engaged in lively discussion of the text we’d read and then listened to the second half of the chapter and responded quite well to my questions.

Though that can’t explain the tears over her handwriting attempts this morning right after breakfast. That still is puzzling me. Sigh. Somehow my visions of homeschooling never included tears; but with my dramatic daughter who seems to have such a short fuse and who fusses about every little thing I suppose they are inevitable. Still, so far I vastly prefer our more low-tidish experience diving deep into all things Antarctic, reveling in penguins and pack ice and krill and diotoms. Still, Bella really wants to learn how to read and write and it’s looking like she’s not the kind of child who is going to spontaneously burst into reading like Scout in To Kill a Mockingbird. So somehow we must navigate the mechanics thereof and find some kind of way through, right?

And here’s where the envy sort of kicks in: Lissa has quite a few years of this under her belt and has learned, I’m sure through much trial and error, what works for her while I’m just setting out and am still trying to feel my way in this schooling thing and don’t have that foundation of experience. I’ve never taught a child to read and write before and for some reason that part of it feels quite daunting in ways that literature, history, science, and even math do not. Perhaps because I was one of those kids who just seemed to learn to read as naturally as breathing long before I began kindergarten? I suppose part of me fears that I’m doing it wrong, that I’m going too fast or too slow, that somehow with this first child I’m going to mess something up and leave her with a hatred for these things if I push too fast or somehow neglect an untapped potential through not even trying if I delay too long trying to do something, anything, to address that desire. Somewhere there’s a balance but I think we’re going to have to fall off the beam a few times before we learn to find it. I just hope we can avoid too many tears. In a way I feel like I’m back to that period six years ago when we brought home this fussy baby who never seemed to sleep for more than half an hour, who never, ever wanted to be put down. I’m at sea and I’m years away from being able to recognize a pattern and try a bunch of things that have worked before.

One thing’s for sure: tomorrow I’m going to the grocery store where we will get more graham crackers and peanut butter and other healthy snacks so my scholar doesn’t have any more hunger-induced panics.