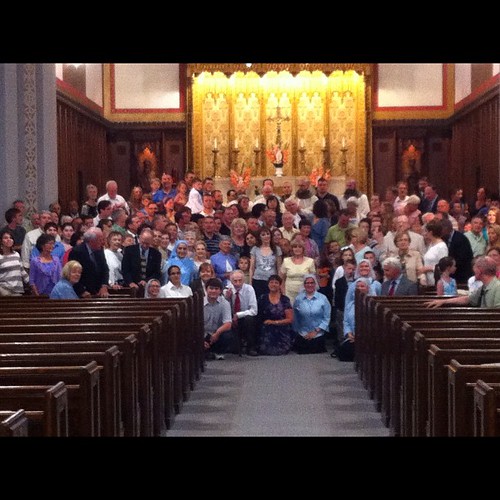 Fr. Michael Sheehan, FPO, after his Thanksgiving Mass with friends and family

Yesterday morning Bella was glued to Dom’s computer watching Cardinal Sean ordain six new priests. Dom was watching the live stream and putting captions on photos in Flickr as they came in on the live feed. Such is the life of a New Media guru. After a time Dom had to go do something else but Bella remained transfixed. My sister wandered in and explained some of what was happening. After the ordination Mass was over Bella wandered into the living room to tell me about it. Then she sat and thought for a few minutes and gravely declared that she wanted to play a game about it.

So she got out her figures of Jesus and six of the apostles. Jesus was Cardinal Sean and the apostles were the ordinands. Bella had the apostles stand in line and one by one each made his vows to the cardinal. Then she had to go hunt for more apostles to represent all the other priests greeting the newly ordained with hugs.

At one point in the game she pointed to one of the apostles and told me that he was the Franciscan brother who had been ordained. I remarked that he was a friend of Uncle John’s and knows Daddy and that he had invited us to attend his first Mass. She immediately jumped up: “Can we go? Can we go?” I told her to run and ask Daddy.

We had originally decided not to go because it would be at a rather inconvenient time and at my brother-in-law’s parish, which is about half an hour away. But I knew from how rapt Bella had been watching the ordination and then acting it out afterward that she would really enjoy going to Father Michael’s first Mass. So we decided to make the sacrifice and go.

And I am so glad we did. Sure, at 11 the kids were all getting a bit tired and hungry; but they didn’t complain or act up at all. Ben fell asleep for a little bit and Bella got sleepy toward the end and kept leaning against me. Anthony did get a bit cranky and fussy at the very end. But they were all remarkably calm and well behaved throughout. And oh it is such a joy to be present when a newly ordained priest celebrates Mass for the first time! So, so beautiful.

Father Michael Sheehan is a Franciscan brother of the Primitive Observance (FPO). My brother-in-law, John, recalled: “Still remember him at 14 in the SCS youth ministry group coming over the house with all the teens taking his hat off as he walked in the door and hooking it to his belt.” It must be something to see that kid you remember from the youth group now both a friar and a priest! The parish community were overjoyed at seeing this vocation they had nourished come to fruition. Truly a new priest is an occasion for joy for all members of the community.

The reception was hosted by the Knights of Columbus and was also a joyful event. I just love events with food and lots of big Catholic families. Especially when I’m guaranteed to know quite a few people in the crowd. Since this was my brother-in-law’s parish, we know quite a few of the families there from gatherings at their house. Add a bunch of Franciscan brothers wandering about and assorted other religious and my kids going crazy with desserts and it was a great time.

I had met Brother Michael once at a party at John’s house but he recognized me and asked how he knew me: Oh! You’re Domenic’s wife! That was kind of cool! Especially since I only vaguely remembered having met him. Of course it was especially wonderful to get a blessing from the new priest. 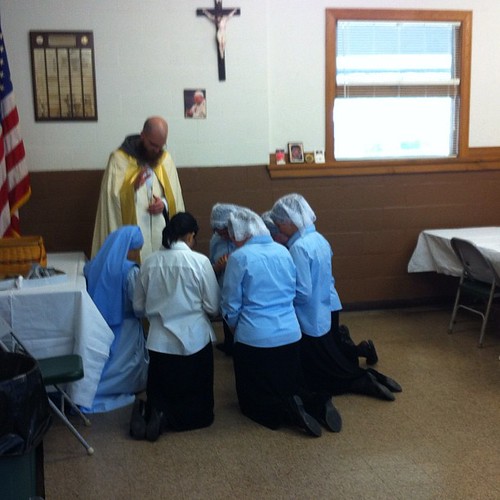 I didn’t get a picture of our family receiving Father Michael’s blessing; but here is one of him giving his first blessing to Mother Olga and the Daughters of Mary of Nazareth

Now I’m off to bed for this has been a very long day.