What We’ve Been Doing 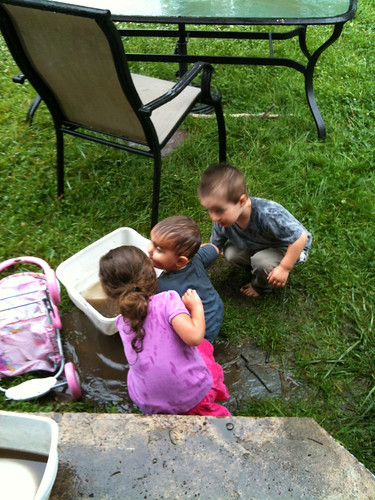 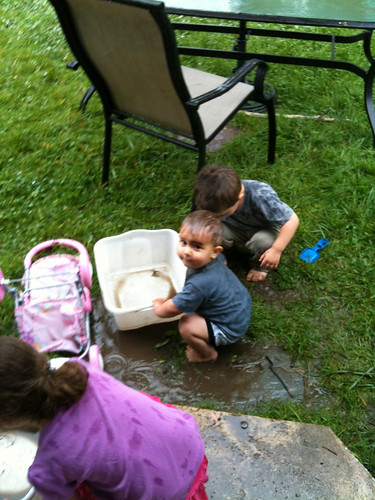 Big muddy puddles right outside the back door. 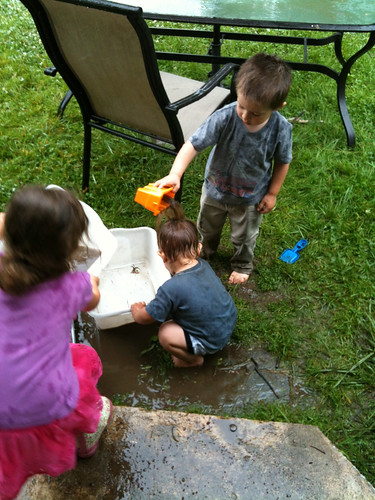 But it kept them out of the house while I made dinner. So I think that balanced out the bath that Anthony needed after Ben poured buckets of muddy water over his head. 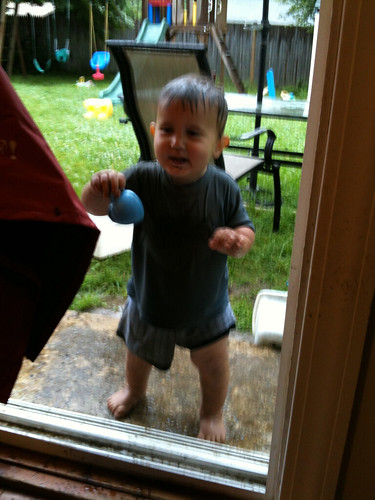 The toddler who looks like a drowned rat. The water was black running off of him in the tub.

Although my energy levels have been pretty low and I’ve been fighting nausea, things aren’t constantly bad. There are many hours of the day when I do feel good and of course my beautiful children entertain me to no end. Not a day goes by but that I’m laughing at something they’ve said or done. There are lots of snuggles and hugs and though there are many fewer books being read at this season—because wouldn’t you know it reading aloud for me often triggers my nausea—they are generally understanding and very self-entertaining.

So I thought I’d put up some pictures and stories to give a sense of some of the high times that balance out the times when I just want to crawl under a rock and sleep for a month until this first trimester is past. 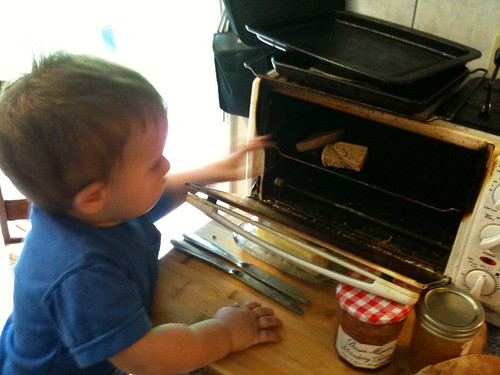 Anthony put some bread in the toaster oven. I think he wants me to make him some toast.

One night long after bedtime Ben was thrashing about on the floor in the hallway sobbing about something. When I finally parsed the words through the tears and screams I was not quite amused. It turns out his fingernails were too long and needed to be cut. Right then. Before he could go to bed. Did I mention I’m pregnant and exhausted? But I did it. I cut them. After all, I was the one who planted the idea in his head earlier in the day when I picked up his hand and saw how long they were and casually mentioned that I should cut them soon.

Bella was very excited about some bugs she’d found in a rotting stump in the back. She really wondered what they were and kept discussing it all through dinner, describing them in detail and trying to get us to figure it out. Finally she pulled out her pencil and drew a sketch. Then I helped her to find the Usborne First Book of Creepy Crawlies and identified her new discovery as a woodlouse. She was so pleased both with the identification and with her drawing, that “came out just like she wanted it to.” 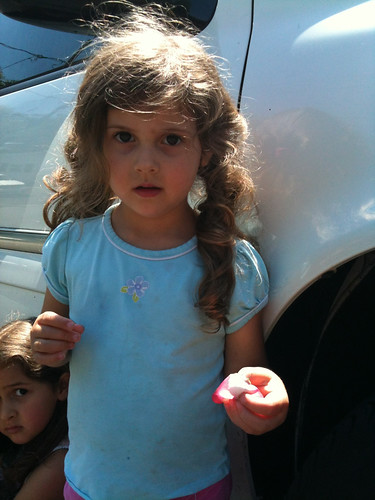 Sophie shows me a snail that she’s carrying about on a rose petal. She’s as excited about creepy crawlies as Bella is.

Also, when Sophie asked why we dye eggs at Easter and my tired brain failed me, Bella produced a most coherent explanation of how the egg represents the resurrection: Just as Jesus is hidden in the tomb and it seems lifeless, the chick is hidden in the stone-like egg. Then when the chick hatches it’s like the resurrection and the egg is empty just like the empty tomb.

I wonder where she heard that. 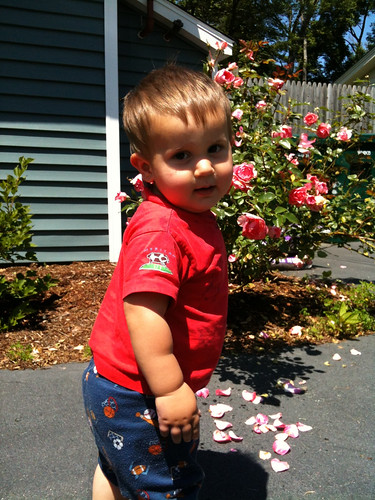 Anthony loves wandering in the front yard every chance he gets. And often stops to smell the roses.

Why is cold air from the air conditioner blowing on me suddenly a nausea trigger? Stupid first trimester! This is the hottest day so far of the summer and I’m torn between being cool and not getting sick. 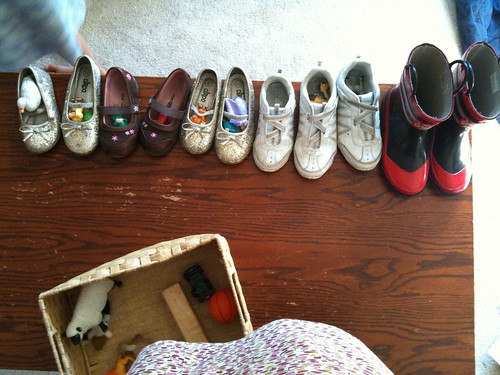 Bella told me that the shoes were houses which Holy Mary made for the street children. She also baptized them because they weren’t Catholic. She also gave two girls first communion. And she helped them with their catechism.

Overheard: Sophie is giving Ben a choice between “liquid money” or “sideways money”. 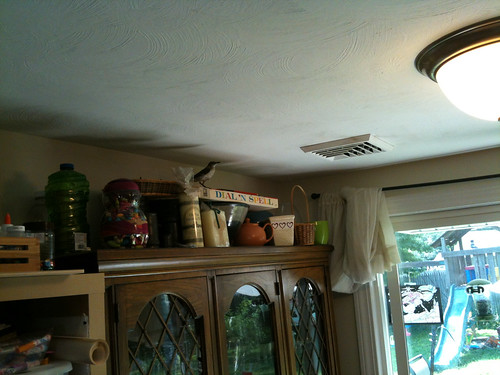 Mockingbird perched on the hutch in the dining room

Last week was the week of the birds in our laundry room. On Monday a mockingbird was flying around our inside house for more than an hour. He had hopped in the back door searching for crumbs—I’d watched him do it many times before. I guess one of the kids who had been playing in the yard came in the door and spooked him. He flew into the living room and then into the laundry room where he kept throwing himself against the window over my sewing table. He was in the laundry room for a long time then flew back into the living room where he threw himself against the living room window for a while. Eventually he ended up perched on top of the hutch in the dining room. Sophie went into the dining room and spooked him and he flew into the pane of the slider and then made his way out the open door. Sadly the upshot of that event seems to be that the pair of mockingbirds that had been coming to our suet feeder dozens of times in a day have now gone somewhere else for food. I haven’t seen either of them since. I had been so happy because they were the first mockingbirds we’d ever seen in our yard and they were so entertaining to watch. They’d only been coming since the beginning of the month. 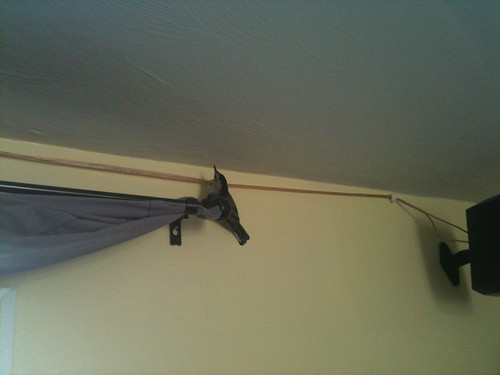 Nuthatch on the curtain rod.

On Thursday I went into the laundry room to get some clean clothes for Anthony and was surprised to find a downy woodpecker flying at the window above my sewing table. Poor frightened little birdie. I opened the door and gently ushered him out with a cardboard box. He was much more docile than the mockingbird. No one had seen him fly in the open back door so I had no idea how long he’d been in there. He, however, has come back to the feeder regularly since his laundry room sojourn. Later that afternoon a nuthatch, who has also become a regular visitor to the suet feeder, flew into the house. He perched in the laundry room for a while and then flew into the living room where he clutched to the curtain rod. Eventually he made his way back to the laundry room and thence out the laundry room door. Two birds in the house in one day, three in one week! It was high drama. Nature study a bit more up close and personal than I’d intended when I put up the suet feeder on a pole about 6 feet from our back door. 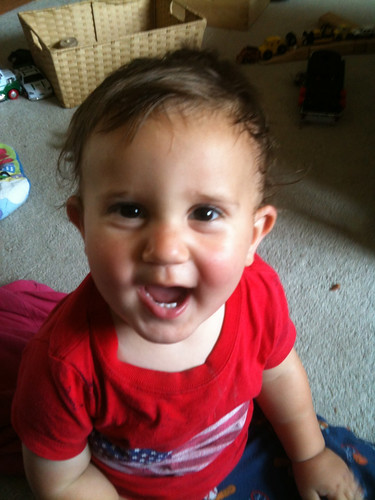 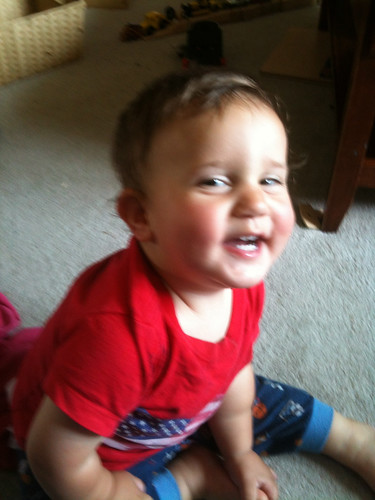 He is a cheerful toddler who is always swift to give an I’m sorry hug as soon as he has hit someone.

Speaking of nature study, I love that when my girls see a big bug on the wall the first thing they say isn’t “Eeek!” but “What kind of bug is that?” And then speculate on what it might be while Daddy squishes it. 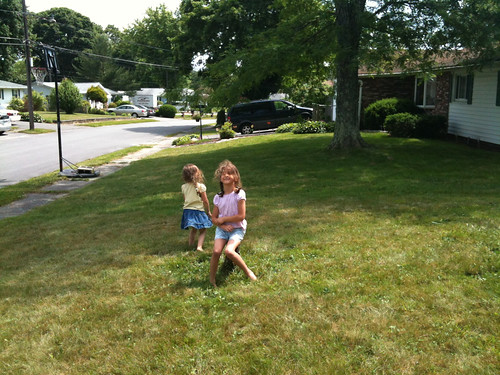 Our peach tree died and Dom had to cut it down. We were all sad not to have it blossom this spring. But the kids love sitting on the stump.

Recently Sophie was wearing her princess dress and roaming about in the back yard. When she came in she informed me that she, Princess Rose, had just returned from a long journey to California. She taught the people of California English so that when they come to America people can understand them. 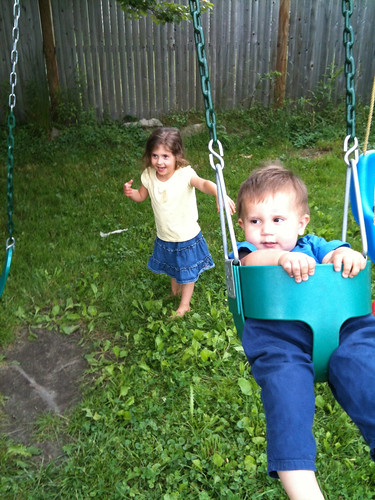 Sophie loves pushing Anthony in the swing. She volunteers to do it to help me out. She’s really beginning to love her role as a big sister and to take on all sorts of jobs for me.

Anthony’s new favorite word is “I do”. He got a huge reaction one day when I asked, “Who wants a cracker?” and both he and Ben yelled, “I do!” at the same time. Now it’s a sort of all purpose way to get attention. 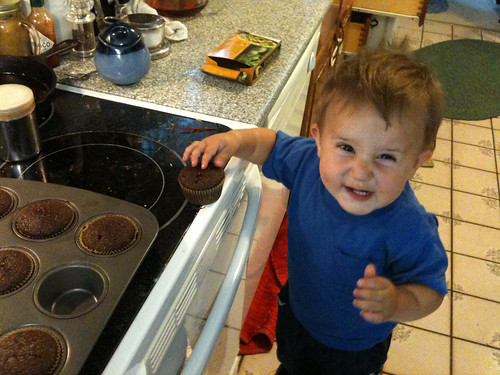 Anthony tries to sneak a cupcake.

When I (finally got around to) called to make an OB appt and learned that my OB has moved to a new practice affiliated with a different hospital that is much further away so if I want to deliver at the hospital near me I will have to switch providers. Of course she has! Every time I get pregnant I have to get a new OB. No two pregnancies have even been handled by the same practice. Why does this keep happening to me? I want to scream,  Isn’t having a fifth c-section bad enough?/i> 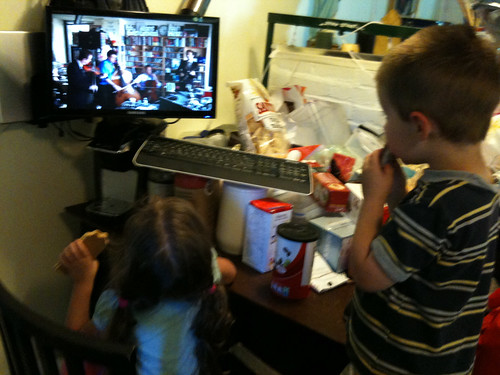 Ben and Sophie get a little culture at lunch time. Watching a You Tube video of Yo-Yo Ma and other musicians playing at an NPR studio.