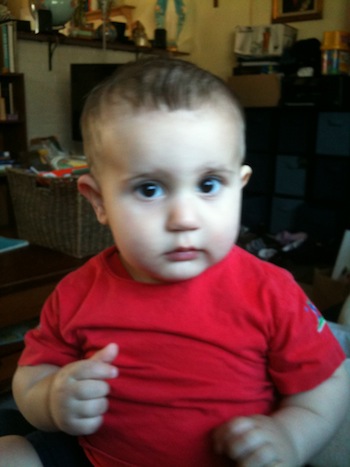 Anthony has been shorn. It was past time as his hair was in his eyes and straggling over his collar. But now he looks so different. I keep wondering who this little boy is who’s wandering about the house emptying all my drawers and making messes.

“Do firefighters like coffee?” Ben asks me. When I say yes he tells me that he’s a firefighter and brandishes his sippy cup, telling me it’s full of coffee. He’s wearing his firefighter boots and pretending his coat is a fireman’s coat.

Bella made two new paper dolls. One was a queen the other was St Rose of Lima. The queen was in white and had a yellow bracelet and necklace. She had a white veil and brown hair and a flower on her dress. St Rose was in a white dress with a black veil and carried a big brown cross.

Bella has been drawing pictures again. Today she made a map with the seven continents. Not accurate as to shape or arrangement but very colorful just like our globe. She also drew a chart of the solar system with the moon and the sun and the planets and the “astronaut belt” (asteroid belt) and a rocket ship. Then she drew a bunch of things she sees around the house: the front door, the rocking chair, a moon surrounded by mist. She’s been hanging them up all over the house.

“I like this book,” says Ben. “Oh?” I say. “It doesn’t have fireworks,” he tells me. I’m not sure why he’s so upset by fireworks right now. He’s never really seen fireworks. Certainly never been to a fireworks show. But he has heard them when our neighbors set them off. But that was last summer. So why do pictures of fireworks in books upset him so? Also, he has decided he really doesn’t like books with owls in them. Owls are scary.