A Mass of Dedication 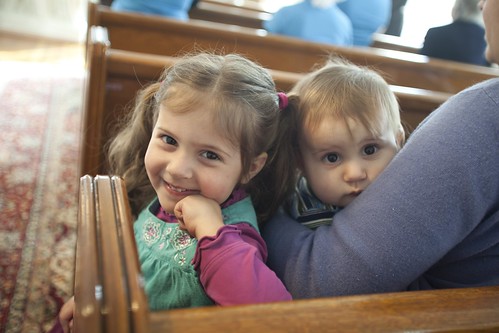 Monday morning we were invited to a special Mass of dedication for the chapel of the new convent of the Daughters of Mary of Nazareth. Dom said it was going to be a very small affair, there wouldn’t be a large crowd there. Even he was surprised at how small it was. There was a grand total of twenty people in the tiny chapel. That number included the Cardinal and all the clergy and Mother Olga and three of her four candidates (the fourth was away visiting her family for the holidays.) Which means our family was almost a third of the people there. Dom’s colleague, George was videotaping the Mass and we were agonizingly aware of how noisy our little crew was. Dom kept reminding himself that Mother Olga specifically invited the children to come. None of them were bad; but their usual noise tends to get lost in a larger church, in a smaller space you knew everyone heard every whine and giggle. 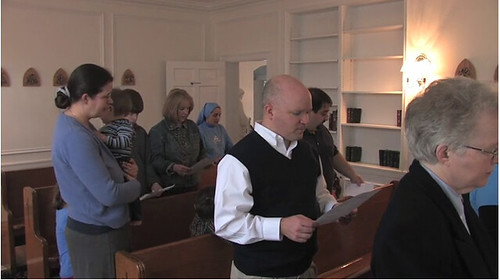 The chapel was tiny, about the size of our living room. In fact, it used to be the living room of the house. The left wall had a fireplace in it and was lined with built-in bookshelves. Ben was especially fascinated by the fact that during the Mass the Cardinal’s crozier was resting on top of the mantle right next to us. The altar stood in a large bay window and the right side of the room had several more windows so the whole space was bright and cheerful. Sophie was fascinated by the flowers on the rug. There was a lovely statue of the Holy Family, Joseph tenderly holding the hand of the child Jesus. 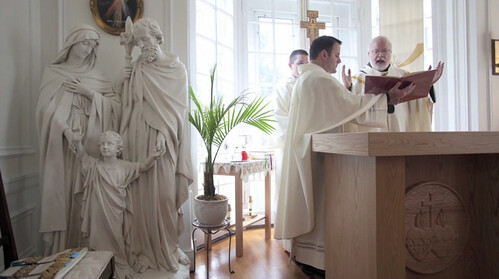 It was a very beautiful Mass. There was incense. I love incense. We sang the Litany of the Saints. I adore the Litany of the Saints. There was singing but no musicians, no accompaniment, just voices raised in joyful praise. I think in general that the Mass is more restful without musicians playing. Acapella singing really is so beautiful. The children knew both of the hymns—the processional was Hark the Herald Angels Sing and the recessional was Immaculate Mary. Oh the joy! They love being able to sing in church but all too often the hymns at our parish are ones they don’t know. Bella was fascinated during the actual blessing of the altar and asked Dom to lift her up so she could see Cardinal Sean sprinkle it with holy water and then bless it with incense. 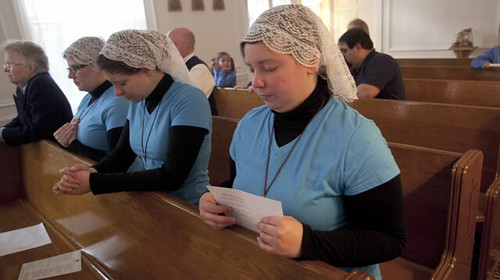 When we first came in Jen, one of the candidates, handed us a couple of the laminated crib sheets that remind you of the prayers that have changed with the new translation. I thanked her and promised I’d try to keep Anthony from destroying it, remembering how he’s chewed the corners off of about six of them by now. She gravely informed me that they were laminated so I needn’t worry. Oh but she doesn’t know Anthony. Sure enough, he’d managed to grab it when I was distracted and had chewed off a corner well before time for communion. When she came around after the Mass and gathered the cards I apologized and told her I’d warned her. She merely smiled and said that she would treasure it. Anthony was pretty good through the Mass even though it was his nap time. He almost fell asleep on my shoulder during the Litany of saints but it ended a few minutes too soon. At the end of Mass I had put him down on the floor in front of me to stand holding onto the back of the pew. I thought he was fine there and so dared to stand for the recessional hymn. I looked down too late to see him disappear under the pew in front of me, crawling towards Dom’s boss’s legs. I had a vision of him grabbing onto Scot’s pants and trying to pull himself to a stand. Yikes! 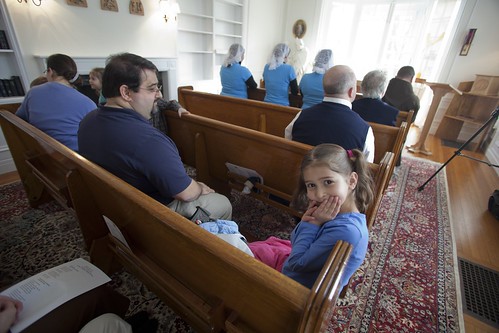 I think my favorite part of the Mass was the Cardinal’s homily. The first reading for the Mass of the dedication of a church is from the book of Maccabees and tells about the dedication of the altar after the Temple has been rebuilt and cleansed. So Cardinal Sean talked a bit about the significance of the altar and the history of the early Christians celbrating MAss in the catacombs ont he tombs of the saints. The Gospel was the story of Zaccheus, which has always been one of my favorites. The Cardinal pointed out how Zaccheus, the chief tax-collector, was willing to be so undignified as to climb a tree merely to get a glimpse of Jesus, just hearing about Jesus had inflamed his desire to such a point that he didn’t care about his appearance or what people thought. He had indeed become like a child, for tree-climbing is a childish activity. (Oh isn’t that wonderful!) He also contrasted the figure of Zaccheus with the figure of the rich young man. When Jesus called Zaccheus by name was further inflamed by the knowledge of Christ’s love for him so that he resolves to pay back the money he’s taken and to give half of what he has to the poor. The rich young man looks down and refuses to meet Jesus’ gaze when Jesus looks on him with love and he is unwilling to part with his possessions. The Cardinal spoke especially to the evangelistic calling of the Daughters of Mary Nazareth when he said that we are all called to look with love on the tax-collectors and outcasts among us. 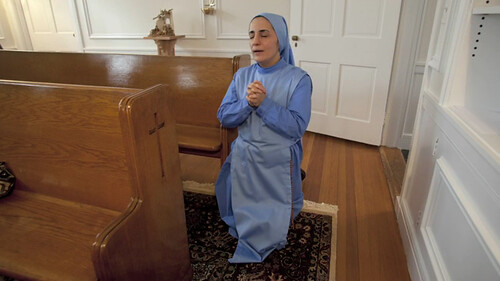 So yes, as usual I spent most of the Mass riding herd on my little flock of children, keeping them in place and trying to keep them from being too loud, putting on shoes that fell off, kissing fingers and heads that got smashed, breaking up squabbles and grabbing everything away from Anthony’s grasp… but I did get to hear the homily and absorbed it! And at the end of Mass I felt a profound peace and happiness. I wanted to linger and not go home. But soon we had our coats and we’d said our farewells and happy new years. Snow was starting to fall as we walked outside. 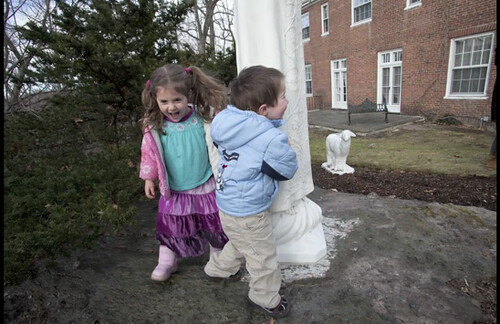 We did stop by the garden to take in the statues of Our Lady of Fatima and the shepherd children. While Ben and Sophie were running about hugging the statues and playing peek-a-boo around Mary the Cardinal came out to bless the statues and to admire the view of the lake that you could see through the trees. He led us in praying a Hail Mary and singing a Marian song in Portuguese while Ben and Sophie, heedless of the prayers, continued to shriek and play. Then Ben fell and got muddy and it really was time to go. 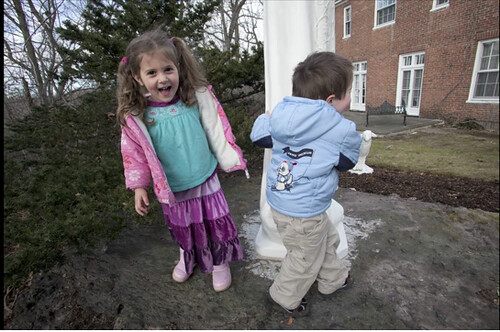 It took us forever to get the children into the car and give them the snacks they were so hungry for. I looked back over my shoulder to see that Mother Olga and her candidates were still standing before the door, none of them wearing coats, the girls shivering in the cold breeze. So I hopped into the car and we drove to the end of the drive where we finished getting everything together for the ride home. 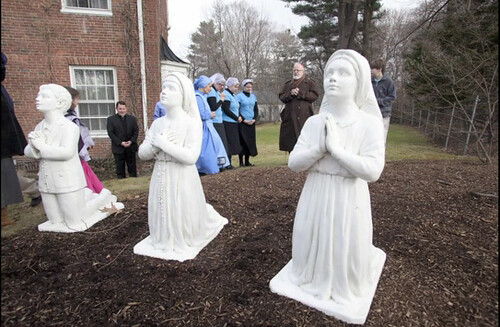 We did stop for lunch, a special treat of burritos at Anna’s Taqueria. Everyone had a very happy lunch and the boys fell asleep on the car ride home. What a lovely way to begin a new year! 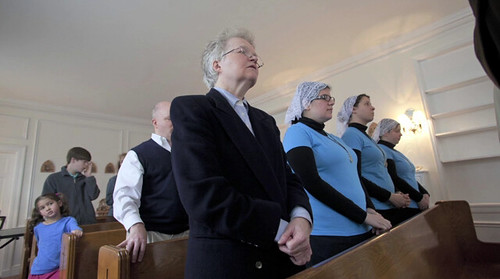 Here’s a video of the Mass. I doubt very much anyone will want to watch the whole thing. But you can hear Anthony and the others interrupting a few times. Especially during Cardinal Sean’s homily.

Blessing of new Altar – St. Joseph of Nazareth Convent from Archdiocese of Boston on Vimeo.