Last year my mother-in-law had a special birthday request. On the eve of St Nicholas, the family gathered at La Salette Shrine and had birthday cake and saw the lights. It was a good time. This year on St Nicholas day Bella asked why we hadn’t gone to the shrine again. I promised her we would; but we never were able to organize the extended family for a trip. Christmas came and we still hadn’t made it. So we said we’d go one day this week because Dom was off, and yet day after day we didn’t quite make it. At the beginning of the week we were still recovering from Midnight Mass. Later in the week, well, we just got busy. We knew New Year’s Day is the last day for the lights. Going last night was cutting it rather close; but go we did. 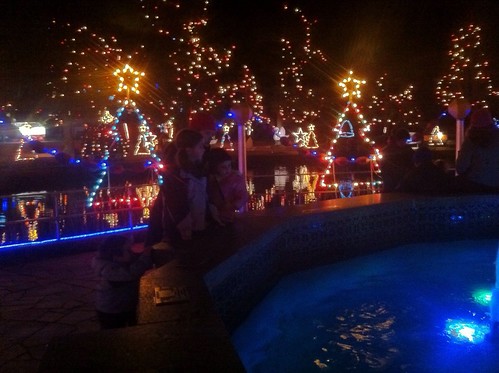 Bella, Sophie and Ben at the rosary pool.

We went to Longhorn Steakhouse for dinner first. (Dom had won a gift card.) It was a little crazy to take four kids out on New Year’s Eve. Even as early as 5pm there was already a one hour wait. So we grabbed the kids a snack at Panera next door while we waited for our table. Dinner was nice. I got an excellent steak salad, very peppery steak cooked perfectly. 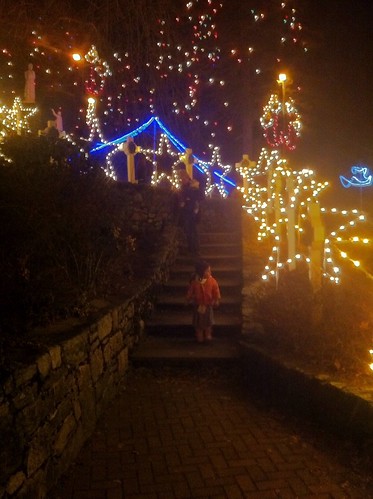 Sophie coming down the stairs from the recreation of the hill at La Salette, France where Mary appeared to a couple of peasant children.

After dinner we went to the shrine to see the lights. Not only is it a fabulous light display but its also very meditative and prayerful. My favorite moment was when a couple of teenagers decided to go up the prayer stairs up to the life-size crucifix on their knees.  Other highlights were a large series of the stations of the cross, the gigantic wooden rosary, a life-size Nativity scene, a live donkey named Clopper, a series of sign boards telling the story of St Nicholas and another series telling the nativity story. Bella amazed us all by correctly identifying all the joyful and glorious mysteries. She was a bit uncertain on the sorrowful mysteries, though. Oops. 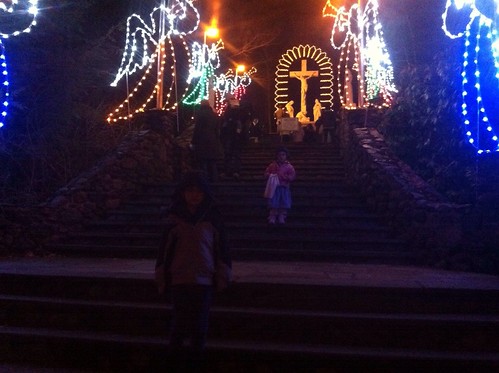 Sophie and Bella descending the stairs from the crucifix. You can’t really make out me with Anthony in the background, but we’re there.

It was a lovely way to say farewell to the old year. Perhaps we’ll make this our family’s New Year’s Eve tradition. There weren’t huge crowds and it wasn’t too cold. The only thing I’d have changed was to get to the shrine earlier. We were much later than I expected because of the whole restaurant thing. But even that worked out pretty well. 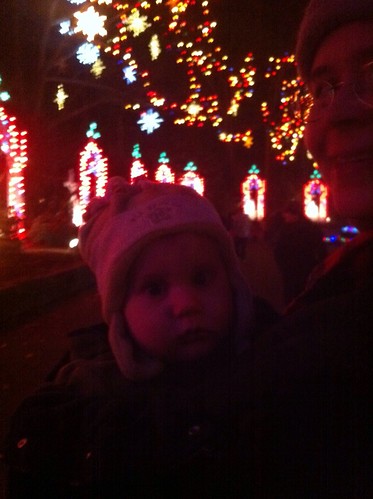 Me with Anthony. Anthony loved the lights.

Happy New Year, everyone, may God bless you abundantly in the coming year.