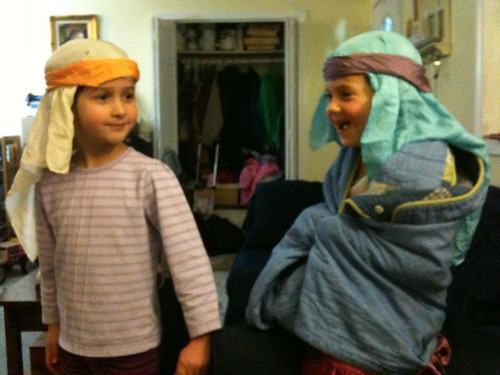 I’ve been meaning to write a blog post about what we’re doing for Advent this year; but writing time has been precious scarce of late. I’ve still not finished writing my tribute to my grandmother either. And all the little unwritten bits and pieces… 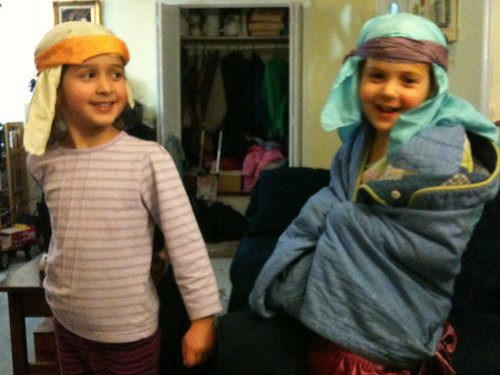 For Advent so far we’re doing our traditional Advent wreath. We light the candle, say a short prayer and then sing a verse of O Come O Come Emmanuel when we say grace. The girls are already singing along. This year I cut some holly branches from the front yard and sort of made my own wreath. I go back and forth between trying to make my own and using a plastic fake holly garland. I think the fake garland looks better, frankly; but I keep hoping I can make something real that looks even nicer.

I’ve also put together an Advent song playlist on my computer which I’ve play at various times. I only have a couple of Advent albums so there’s a lot of repetition, which does limit the amount I play it. 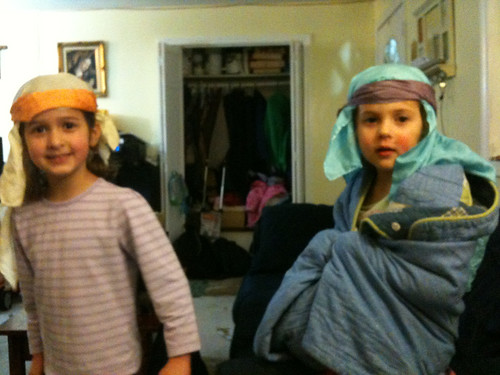 I decided to follow the example of so many other blogging moms and wrap up our Christmas books and let the kids unwrap one a night. I didn’t try to wrap them all ahead of time. Just did about ten or so and numbered them. I figured I’d wrap a few more more when I have a free moment after the kids are in bed. After they are in their pajamas, have brushed their teeth and picked up the toys and have said their prayers, the children get to unwrap the book of the day, which I then read to them. Then we read our regular bedtime stories if there’s time.

I want to do the Jesse tree readings with them and I still may, but I haven’t started yet. Maybe I will maybe I won’t. No stress. 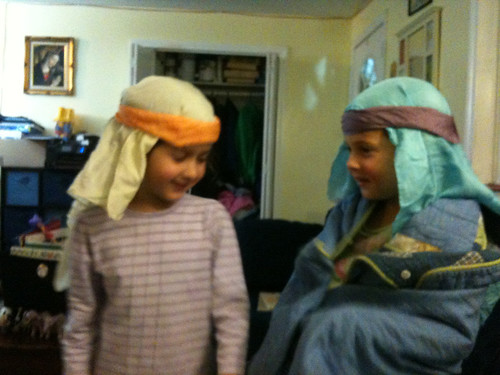 For St Nicholas we kept it simple; but then St Nicholas wasn’t even something I did when I was a kid. It’s a custom I piked up from some of my grad school roommates. I hit the after-Christmas sales last year and bought some pretty ornaments and some St Nicholas holy cards and I found some foil-covered chocolate coins at Target. The kids got those in their shoes, waiting for them when they woke up. Also, a Christmas book about St Francis and the first creche, which I suppose is rather funny for St Nicholas’ Day, but it was on sale after Christmas like the ornaments and we already have two picture books about St Nicholas. I also printed off some coloring pages of St Nicholas. And then I’ve wrapped up one of the St Nicholas books for our bedtime story tonight. Otherwise, that’s all we’re going to do about St Nick. 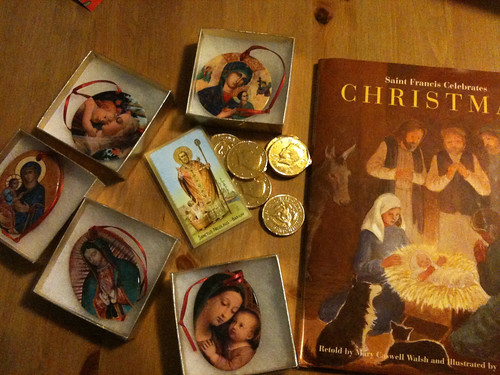 I’ve got a book about Mary wrapped for Thursday’s feast of the Immaculate Conception and we’ll go to Mass with Dom at the Pastoral Center. I’d like to try to make a special treat for St Lucy’s day and I’ve wrapped our book about Our Lady of Guadalupe for her feast on Dec 12.

Simple. I want to do so much more but I also know that once again this isn’t the year for all that. Babies and toddlers limit what I can do. Crafts and activities will keep till another year when Bella and Sophie and Ben will be more self-directed. Our Christmas baking will probably be one batch of sugar cookies and maybe a batch of gingerbread cookies. That’s it. Maybe some rum balls or bourbon balls for the adults. But since Dom is diabetic that’s an extra incentive to limit the sweets. The children can’t actually consume that many, my sister has gone gluten free, so I eat the lion’s share of most desserts I make. I don’t need them even if Anthony’s nursing is keeping the pounds from appearing right on my hips.

Almost all my Christmas shopping will be done online. But then I decided a few years ago that I’m only going to shop for the immediate family. No way I can contend with buying for all the inlaws and outlaws. It’s too much to buy something for everyone and I do not have the time to make something for everyone. Presents and Christmas cards for all and sundry are another thing that will have to keep for another year, much though I would love to do handmade cards with the children, I really doubt that’s going to happen. I know my limits. Or I’m trying to.