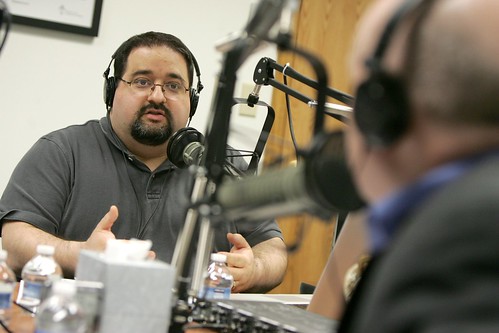 Dom appears as a guest on the Archdiocese of Boston’s daily radio show, The Good Catholic Life

Although cognitive scientists have debunked learning-style theories, they concede that people may still have distinct learning preferences. It is certainly the case that I far prefer to receive information in written form to simply hearing it. And in a classroom situation I much prefer to take notes rather than being told that the information is on a handout so I should just sit and passively listen to a lecture.

In any case, I find that if I can read a transcript I often prefer that to listening to a radio show or podcast and sometimes even prefer it to watching a video. All things being equal, if I can get the same content in a written form, if I’m not losing anything by the translation, I prefer that mode of communication to oral forms.

Dom’s office produces a daily radio show. I feel bad because I’ve only ever listened to parts of maybe three or four of their broadcasts. I’m not disinterested in the content; but my time is limited and with four small children I don’t find that I can often listen and understand anything that is longer than perhaps three or four minutes long. Three or four minutes—that’s about the longest I can go without interruption. And I really have to listen uninterrupted to be able to focus and retain any information. I also find that most radio programs and podcasts have an awful lot of padding. I hate listening to the introduction. It takes too long and I get impatient. In a written format that’s the stuff I would skim over but it’s hard to skim audio content.

I know some people can multitask and are good at cleaning or cooking and listening at the same time. I’m actually not so bad at that kind of mulittasking. I used to listen to audiobooks while sewing or while driving. What I’m not good at doing is trying to cook, sew or drive while listening to a radio program, and monitoring the activities of a bunch of young children who are prone to interrupt. For some reason my tolerance of interruption while reading is much higher than my tolerance for it while listening.

And so when I do try to listen I seldom get past the introductory segment. What happens is that I get interrupted about three to five minutes in while the program is still warming up, it hasn’t launched into the real content. My interest hasn’t yet been captured and I let myself get distracted. Even though the show blurb was enough to make me want to listen in the first place, I got frustrated because I haven’t got to the good part yet and I begin to doubt whether the good part will really be good enough for me to justify the time investment. All too often when I do listen all the way I find that the treatment of the topic that radio can give is seldom as in-depth and probing as a written treatment. I’d rather just find a good article that has a bit more meat to it, more room for the kind of long complicated sentences that express more complex thinking that the spoken word almost always streamlines and simplifies.

I know that in generations past oral forms were more complex and dense. Just read the orations of Cicero! Or Shakespeare’s plays. But in today’s format the audio program just doesn’t tend to that level of complexity.  Video can attain to more complexity because it layers the audio with visual, but even there it is a different kind of complexity than the written word.

The sad thing is I’ve recently noticed in myself the same kind of tendency to tune out people who are actually speaking to me. When Dom or my sister is trying to explain something, tell me about a book they’ve read or something they’ve learned, I find I tend to treat that kind of spoken word as if it were informational content. When I realize I already know about the subject or understand what they are trying to explain, my brain sort of marks it as something that I’ve understood and I get bored and forget the social niceties and interrupt or change the subject. It is a terrible habit and it drives my husband crazy and makes my sister feel that I don’t care about her.

I suppose I need to cultivate the habit of attention and to train myself to gently interrupt and tell someone when I’ve heard something before or I understand the point they are trying to make instead of losing my focus and tuning them out.