Sophie and the Morning Glories 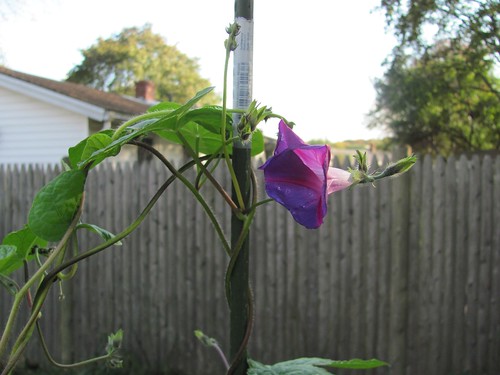 It was mid to late July when the girls found some of the seeds we had so carefully saved last fall. This spring with a newborn baby, getting used to being a family with four children, I hadn’t had it in me to do a lot of planting. A few seeds here and there; but nothing like what I’d planned. 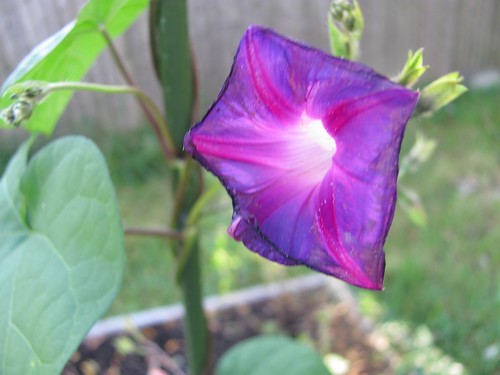 Sophie held up the bags with marigold and morning glory seeds and asked if she could plant some. “It’s really too late in the season,” I protested. But try to reason with three. It was easier to give in than to face the tempest. So I let her take a few precious seeds out of the bag and off she ran into the yard. 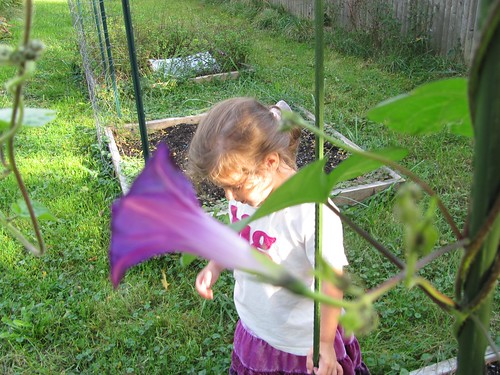 I didn’t really worry about where she was going to poke them. I don’t know why but I scarcely believed they would come up. 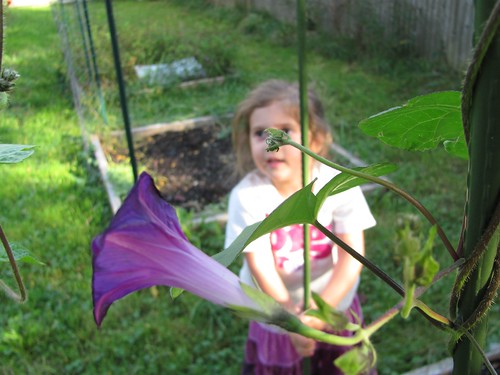 I’d almost forgotten about it when weeks later I was out inspecting our three measly tomato plants, they produced almost no yield this year. I was going to pull out some weeds from the bed, more out of habit than any concern for the tomatoes, when I spied some familiar looking leaves. “Hey, Sophie, is this where you planted those morning glory seeds?” 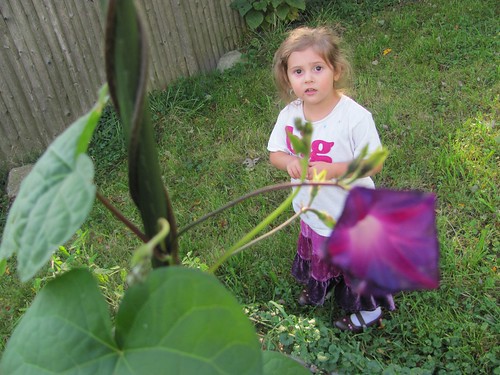 She ran up to stand beside me, “Yes.” And I spotted a little marigold plant as well. It seems that it wasn’t too late after all. 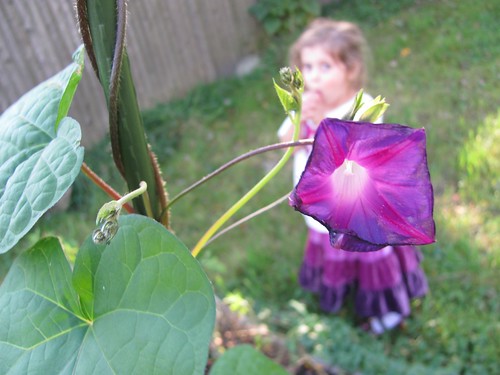 Funny how I tend to get stuck thinking that there is some sort of point after which it’s too late to bother. I forget that the growing season is long enough that I don’t necessarily have to get things in at the first available opportunity. Nature is actually more flexible than that. 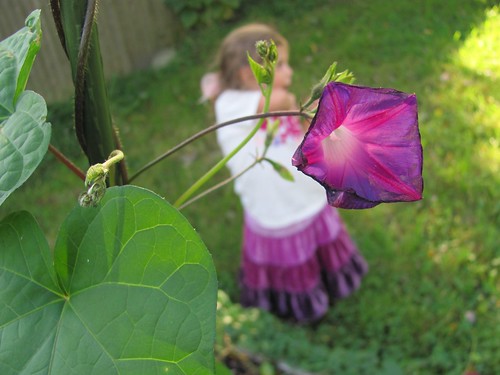 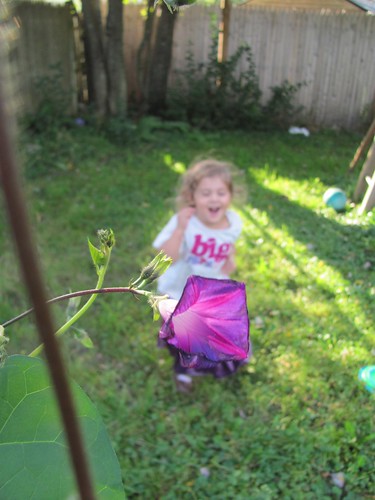 I’d wished I’d planted more flowers. There are some zinnias and wildflowers in the side bed. There, under my window where I threw some seeds down, not sure if anything worthwhile would actually grow, they are lovely beyond my wildest dreams. Bright and lush and lasting and lasting and lasting much later than I dreamed they could, still so many tightly clenched buds waiting to unfurl…. but I can’t see them from the house. So the morning glories growing where I can see them from the back door are a gift. 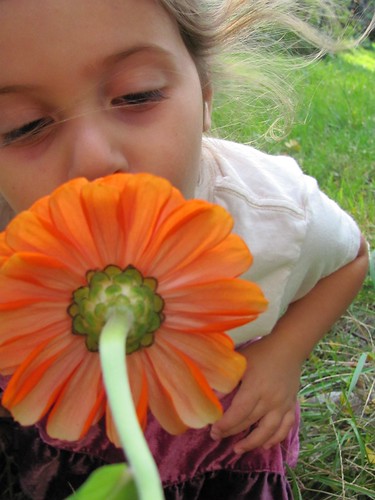 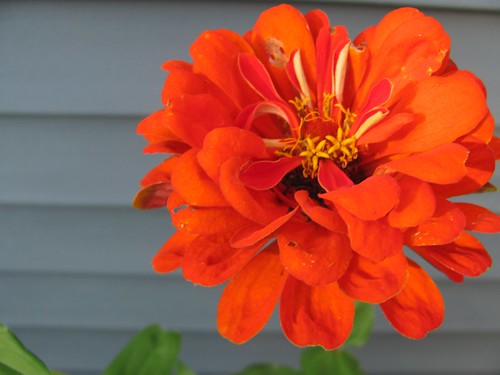 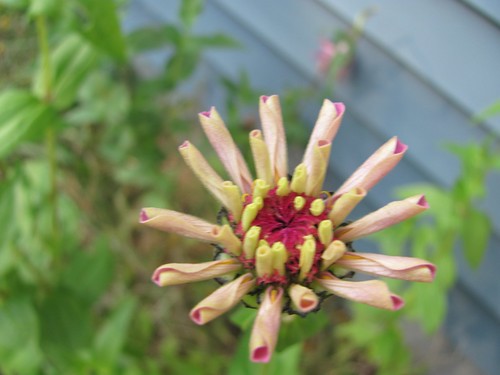 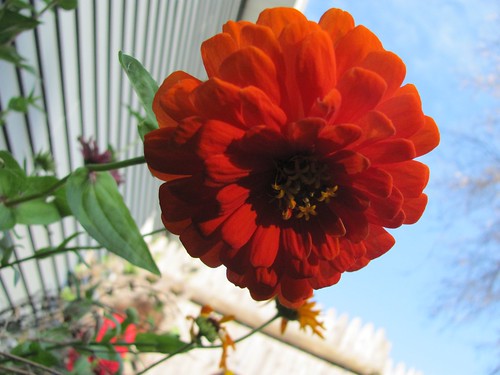 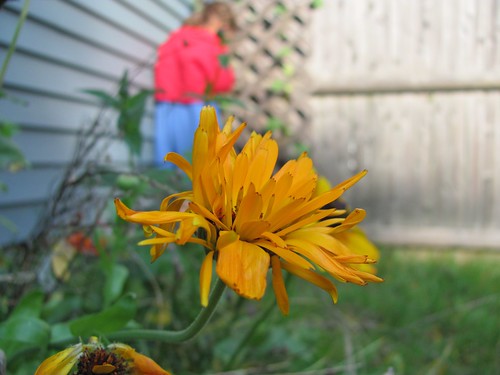 Little girls and flowers… just when I think I’ve got it all figured out, they surprise me. Sophie’s morning glory vines climbed up the tomato stake in bold twining spirals. Bright purple and pink and blue trumpets appeared each morning, shining stars in their hearts,  and faded by the end of the day. The marigold produced bright yellow blooms to warm the heart. Sophie’s flowers, a surprising late-summer gift that have brightened these waning days of autumn. 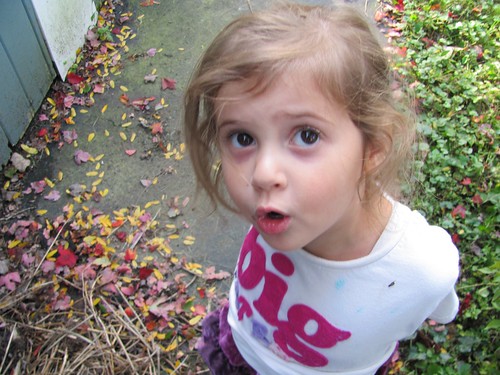 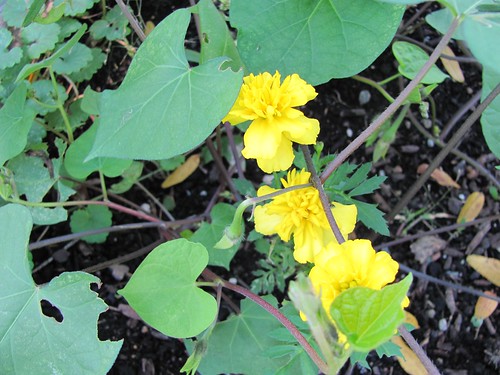