F is for Fatima

This week has been F week. Bella has colored pictures of frogs and flags and firemen and fire trucks and fish. Then today the pilgrim statue of Our Lady of Fatima visited our parish. What a perfect timing! So yes, I also printed off a coloring sheet of Our Lady of Fatima. 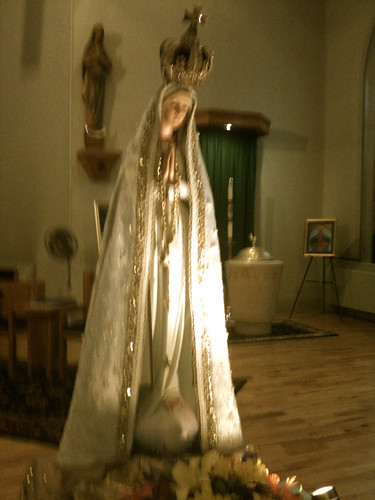 We went to Mass at 9:00. All of us, Dom and my sister and the four kids and me. After Mass there was a talk. (Actually it was given by Daria’s husband, Bill, who is the keeper of the statue. I introduced myself to him afterward.) I really had wanted to go to this event for the kids’ sake. Especially for Bella who I thought would get something out of it. The talk was over their heads, however. (There was another talk for the schoolchildren this afternoon at 1 but that’s during naptime.) But it was a wonderfully convicting talk for me and my sister (Dom had to go to work and missed the talk.)

I didn’t hear the whole thing because I had Ben on my lap and he was sad because he didn’t have his blankies which he’d left at home and I was trying to distract him with some picture books and a bag of Cheerios. (Not brought out until Mass was over.) But he wanted to chat about the pictures and then he started to get crazy compulsive about his hands being sticky and no amount of wiping them with baby wipes would satisfy his feeling that they were messy. He’s been going through that phase the last couple of days and it’s driving me nuts. We’re he an older child I’d totally be worried about OCD but as he’s two I’m just hoping this phase passes quickly.

Anyway, I won’t try to recreate the talk, just that it was inspiring and I am so glad we went. And then we came home and I had one of my lowest moments as a mom, completely losing my temper with Sophie and—when I threw her sippy cup in frustration—even breaking the glass on poor Ben’s picture of Mary and Baby Jesus. How’s that for driving the point home about my anger and lack of charity? Perhaps that too was a measure of grace, a little signpost helping me to see more clearly where I’d made a wrong turn? I’m going to have to ponder on it for a while.