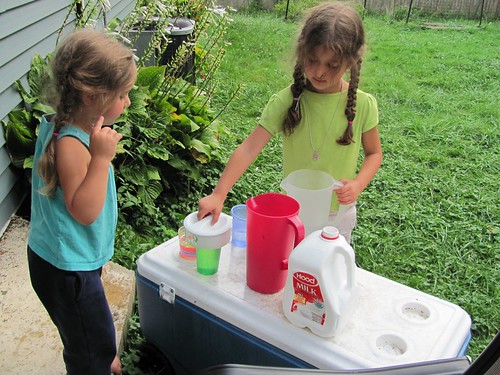 I was chopping ham for soup when Ben came into the kitchen asking for a glass of milk. I told him I’d get it for him as soon as I was done with the ham. He decided not to wait and instead pulled the step stool over to the refrigerator. I thought he was going to get his cup from breakfast off the shelf. Instead, he grabbed the half-full gallon of milk, saying, “I do it.” 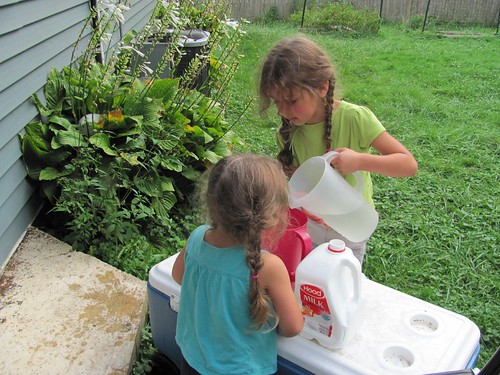 “Oh no you don’t!” I hurriedly dried my hands and grabbed the carton out of his hands. Immediately tears erupted. Ben cannot stand to have anyone tell him no. I tried to gently explain that the carton was very heavy and he would spill it. He wasn’t buying it. “I do it.” 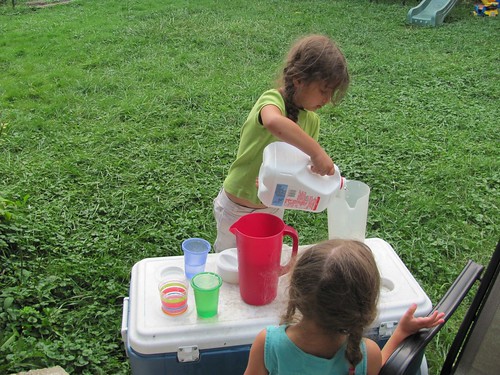 Then inspiration struck. I’d show him. I pulled a pitcher off the top of the refrigerator and filled it with water and grabbed a cup. I took them out to the back step and told him, “When you can fill this cup from the pitcher without spilling, then you can pour your own milk.” 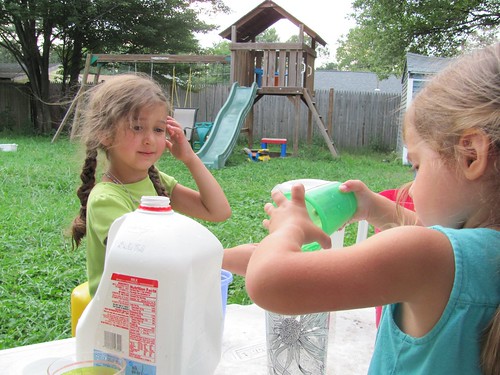 He balked at the pitcher, but the girls both jumped in to do the activity. Then I spied an empty milk carton in the recycling bin. I filled it up with water and grabbed another two cups and another pitcher. Now there were three cups, two pitchers, and three children happily pouring away. 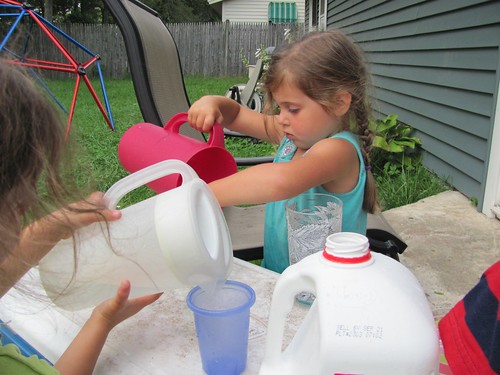 Bella grabbed a pitcher and started pouring, as she poured she exclaimed, “See I didn’t spill!” and then the cup overflowed because she didn’t know how to stop pouring in time.

“Not quite as easy as you thought. Huh?” 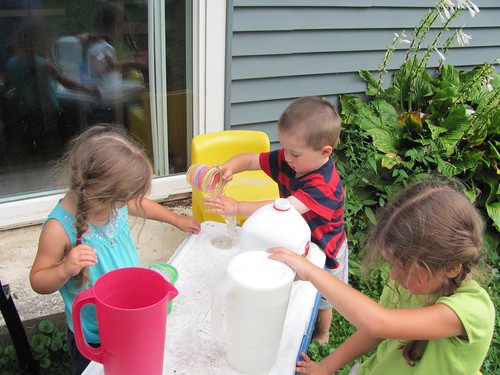 Bella became a mother’s helper, refilling Sophie and Ben’s pitchers from her own when they emptied them. She made several trips to the kitchen for more water. Ben soon got bored of the pouring because he didn’t have any mastery. He began to shove grass blades into the gallon jug and into the cup. But Sophie was entranced. She worked at the task long after the other two had wandered off. She even figured out how to refill her pitcher from the kitchen sink. 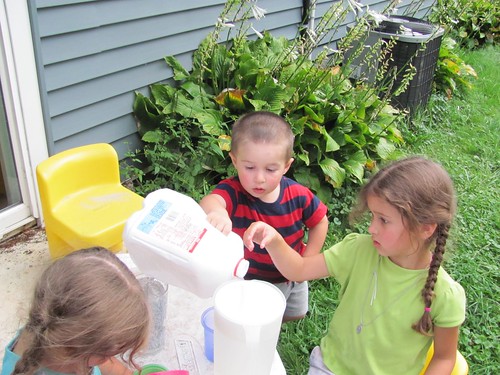 All three got soaked and had to change their clothing. But it was outside and just water there was no harm done as they tried and failed. I think some lessons were learned. Bella asked if she could do the task again tomorrow as part of her school. 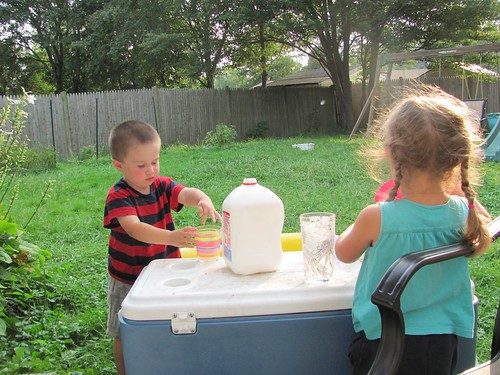 I don’t have the patience or the budget to truly be a Montessori mom; I didn’t actually present the lesson, just turned them loose with the materials and let them figure it out on their own from trial and error. I had dinner to make, a baby to tend. Though I did stop to snap some pictures, of course. I am a blogger after all. 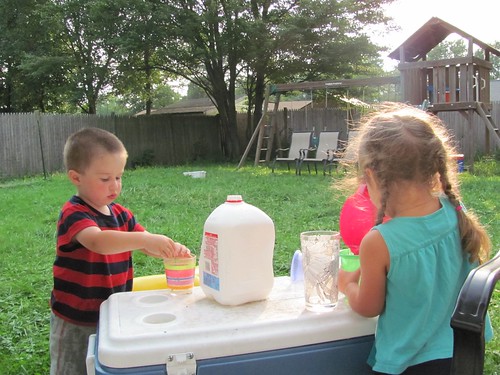 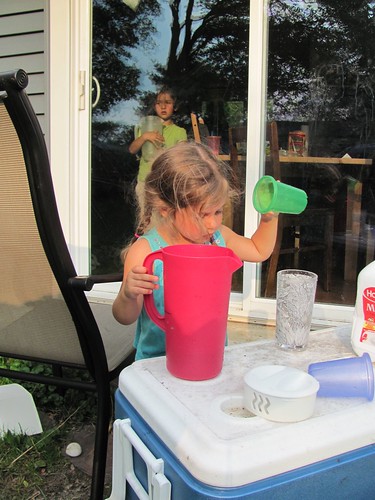 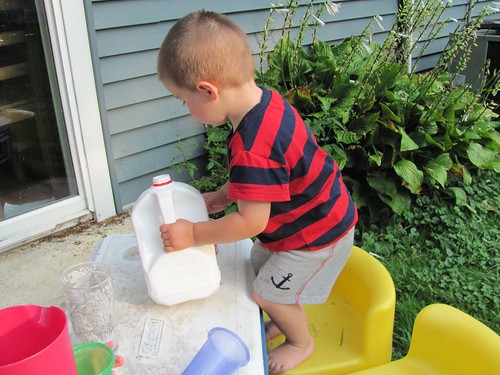 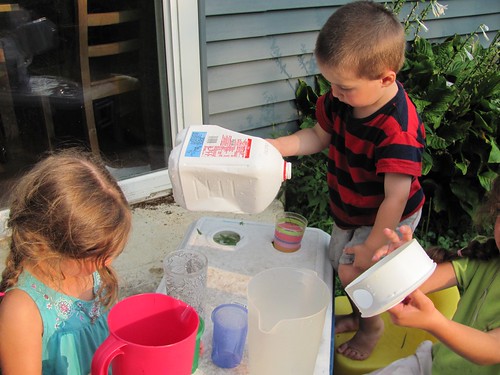 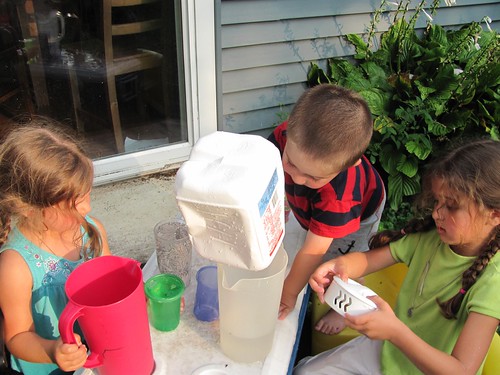