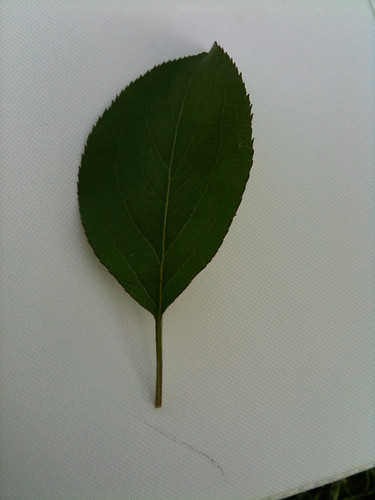 Attention treehuggers, homeschoolers, and botany buffs! The other day my mom gave me a heads up on Leafsnap, a new (free!) app for the iPhone, iPad, and Android, the first in a series of electronic field guides being developed by researchers from Columbia University, the University of Maryland, and the Smithsonian Institution.

This free mobile app helps identify tree species from photographs of their leaves and contains beautiful high-resolution images of their flowers, fruit, petiole, seeds, and bark. Leafsnap currently includes the trees of New York City and …Washington, D.C., and will soon grow to cover the trees of the entire continental United States.

Leafsnap turns users into citizen scientists, automatically sharing images, species identifications, and geo-coded stamps of species locations with a community of scientists who will use the stream of data to map and monitor the ebb and flow of flora nationwide.

The genesis of Leafsnap was the realization that many techniques used for face recognition developed by Professor Peter Belhumeur and Professor David Jacobs, of the Computer Science departments of Columbia University and the University of Maryland, respectively, could be applied to automatic species identification.

If you’ve ever used the face recognition feature of iPhoto, it works about like that. You still have to do the work of confirming an identification. The software just limits the field.

Here’s how the species recognition part of the app works: You snap a photo of a leaf. The leaf must be against a white background. Which sort of limits the usefulness of the app in field work. Unless you carry a piece of white paper around with you. The app uploads your photo and then brings up a list of possible matches. For the photo at the top of this entry, it gave me 24 possibilities. When you see a leaf that looks like a close match, you can click on it. Now the app shows you a set of photos of that species. It shows the front and back of the leaf, a branch with many leaves on it, a few pictures of the flower, a few pictures of fruit and/or seeds, a picture of the petiole (the small stalk that attaches the leaf blade to the stem), a picture of the bark. Each picture has a little ruler to show you the scale (in mm and cm).

These additional photos should help you make a positive identification. Once you identify the leaf, you can choose a label. The app keeps a list of your collection and keeps your photos in a database, tagged by the location where they were collected. On the website I linked to you can see a map where all the collectors are located. I found the pin for my location. Pretty cool!

Here’s a preview of the app that gives you a taste of the look and feel of it. The photos are beautiful in their own right.

If you don’t want to snap a photo, you can still browse the app and use the photos to identify specimens. It could work like a traditional field guide as well. The trees are listed alphabetically, however, so you’d kind of have to have some idea of what you were looking for. Or you could just browse the entries just for fun.

I do love that it keeps a notebook of all the specimens you’ve photographed and identified. That’s one of my favorite features. So cool!

So far I’ve identified the bush in our backyard (the leaf pictured at the top of the post) as a crab apple ( I swear this is the first year it’s actually had flowers) and the tree out front as a cedar. Not yet sure if it’s white or red cedar, though.

Jennifer at As Cozy as Spring said that she was worried than an app might diminish the thrill of the identification process. Will we still study the stems and flower structure as closely in our quest for accuracy? My response is that in that regard the app is really just a fancy digitized field guide and for the most part using it is no different than using a traditional guidebook to identify plants. You still need to observe closely and look at stems and flower structure and bark, etc. What the app does is help you to refine your initial search to the most likely candidates by matching the shape of the leaf to images in its database. It’s like having a bit of a nudge as to which section of the book you should be looking in. Once the app brings up a list of plants whose leaves are possible matches for your specimen, you still have to look at all the other features to make a positive match. To that end the app has beautiful pictures of the flower and fruit and seed and petiole and bark and branches to help in that task.

On a related note, there is an iBird field guide app for the iPod and iPhone. It’s very well done and I highly recommend it. It has a good collection of photos and identifying information and very handy search features, it also has recordings of bird son…gs. What it doesn’t have that Leafsnap has is the the photo recognition aspect—much harder to take useful photos of birds in the field than of leaves—also it doesn’t have the data feedback where the user becomes a field collector collaborating with scientists to create a map of where species are actually found. That would be cool, though again without the photo recognition, it would be too hard for scientists to confirm field identifications of users. Here’s the link to the iBird website: http://www.ibirdexplorer.com/

. How cool would that be?