1. Bella has started trying out new words by using them in conversation and watching my reaction to see if they fly. This week’s words were gazing and glimpse.

At the mall on Monday she was gazing out the window as she ate her pizza. (This rare trip to the mall was to get my glasses repaired for free at Lenscrafters where they put in two new nosepads and tightened all my hinges. Afterward we did some window shopping and ended with pizza at the food court.) “I’m gazing at the cars on the highway,” she told me.

Tonight she caught a glimpse of Daddy from across the parking lot. (We went to try out a new Japanese steakhouse, meeting Dom there on his way home from work.)

2. After picking up diapers at Target we stopped at Starbucks (Starbucks in Target is so awesome!) to get coffee, juice, and a scone to share. 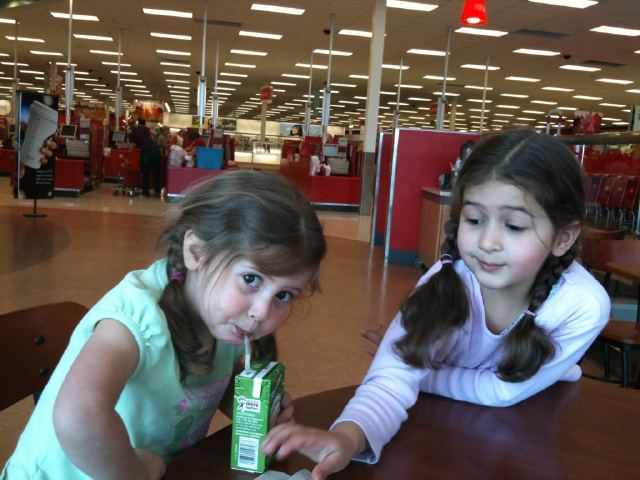 Little things like sharing a treat with my kids just make me happy. 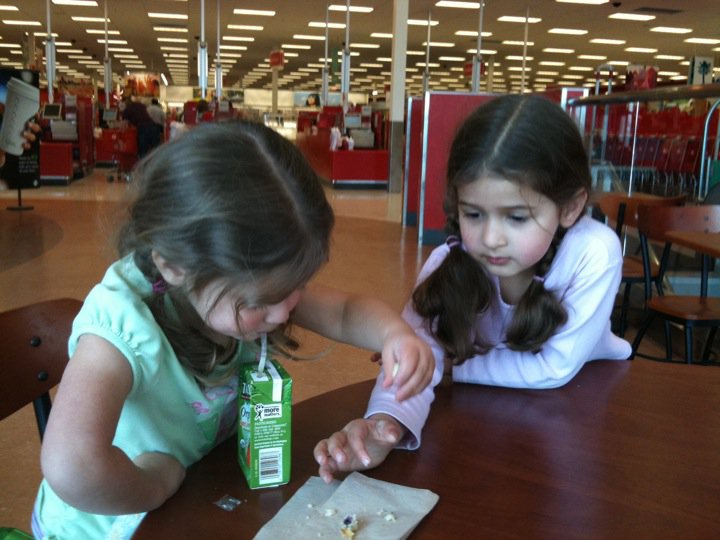 But I think they gave me a fully-loaded frappaccino instead of a decaf. Anthony had bright eyes much later than usual that night.

3. AT&T tells me my iPhone has suddenly gone over my data plan and they’re charging me an extra fee. I haven’t been doing anything different, though. Just the same old Twitter and Facebook and iBreviary. No new apps, no games, nothing.

Last month I only used 72 MB. Now they say I’ve used 411 MB in the last 11 days. Dom spent a long time on the phone with no resolution.They can’t tell him why the phone is suddenly registering so much more data usage when I haven’t changed my behavior. It’s clearly an error. A very expensive error. And evidently a common one. I found quite a few people making the same complaints about mysterious data usage in the hours between midnight and four am. That AT&T refuses to deal with this problem, will not even consider that it’s an error on their part and will not remove the charges…. that makes me so hot under the collar. Bah on them!

4. One of the Apostles is currently going by the moniker Johnny Pat Snuff. Others are Josh and Francis. (These are the apostles that came with the fishing boat made by Bible Toys that was one of the freebies at the Mom’s Day Away.)

I think the name Johnny Pat Snuff comes from my dad telling the girls that when we were kids my sister started calling my mom “Mommy Pat Scott” as she tried to assimilate the two parts of my mom’s identity. The sound of the two names is too close. Also the girls have been fascinated by a nursery rhyme about giving a pig a pinch of snuff. “What is snuff, Mommy?”

5. The other day I looked up to see what the girls were playing with. Something about wearing costumes. I laughed out loud when I saw what Bella had done: the apostles and animals from the ark were wearing “costumes” which Bella had made by putting the finger puppets on their heads. The monkey was being a duck, the ostrich was being a peacock and the camel was being a giraffe. The apostles were a lion and a cardinal. 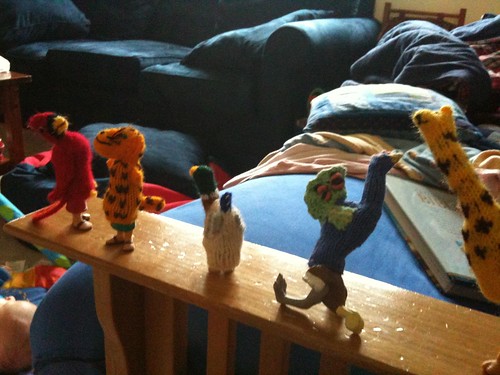 6. The other morning I watched as Bella acted out the Easter story using the Bible Toys Jesus figurine and the mast from the boat. First Jesus was carrying the cross. Then he was nailed to it. Then he was laid in the tomb. Finally, he rose from the dead. I think it’s safe to say Bella’s got that story down. I’m thinking that even though we haven’t been doing any formal catechesis, she’s in pretty good shape. I keep planning to start doing Catechesis of the Good Shepherd; but it looks like so much work. Is it even really necessary at this point?

7. Ben reads the morning paper with Daddy. Ben just has to look at the advertisements for trucks. 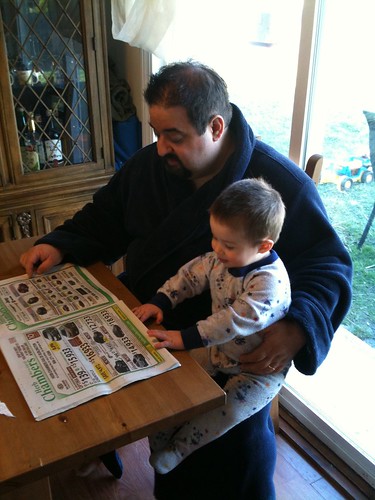