In the comments to my Palm Sunday post, Kathy asked about Lent and Easter books.

I must confess that with Anthony’s arrival shortly before Ash Wednesday I haven’t been so good at doing Easter preparation this year. We’ve really only looked through two books, the Fiona French and the Brian Wildsmith versions of the Easter story. I haven’t found The Donkey and the Golden Ligh or The Three Trees yet—need to do that this week.

Easter books are so much tougher than Christmas books. There just aren’t as many of them. It makes sense. The story of a baby’s birth is easy to tell while the story of betrayal, torture and death is harder to translate into something that is meaningful for children. The author must decide how much to tell and what details to gloss over. I struggle with how to talk about evil, death and sin to children who have not yet reached the age of reason. Every child is different too and I don’t think there’s a one size fits all answer.

Anyway, here is a quick repost from the archives of past reviews: 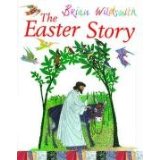 by Brian Wildsmith tells the story of the passion and resurrection from the point of view of the donkey that carried Christ on his back. “The little donkey had never been ridden before, but Jesus spoke gently to him, and soon he stopped being afraid.” Soft watercolor illustrations with gold highlights on each page. The language strikes a nice balance being neither overly simple nor overly flowery.  The Eucharistic language of the Last Supper is maintained:

“Take and eat this,” said Jesus, holding the bread. “It is my body.” And the donkey watched as Jesus lifted up a cup of wine. “Take and drink this,“Jesus said. “It is my blood.”

The bloody details of the passion are gently minimized: no scourging just mockery,

“So the soldiers took Jesus away. They put a crown of thorns on his head and made fun of him. ‘Hail the King of the Jews!’ they said. They gave him a huge cross of wood and forced him to carry it.”

(The donkey wishes he could help Jesus carry it.) And the crucifixion and death are all covered in a simple statement: “They crucified him between two thieves.” The narrative moves directly from that to Joseph requesting the body from Pilate.

The donkey witnesses the resurrection and the ascension and then returns home. “And the donkey stayed there the rest of his life, remembering the kind and good man he had carried on his back to Jerusalem.”

I’m not thrilled with reducing Jesus to a “kind and good man” in the final sentence, I think there are plenty of stories and pious legends about animals recognizing the divinity of Christ and I’d have preferred the story take that tack. But it isn’t terrible either. At least the book covers all the essentials of the story. I think this is a good introduction to Easter and works well with Bella’s level of understanding and her attention span.

by John and Gill Speirs that follows a donkey who was born on the same night and in the same stable as Jesus and who never forgets that it was a special night, symbolized by the mysterious golden light that shines from the star that guided the Magi. The donkey, named Bethlehem, also accompanies his mother when she carries the Holy Family on their flight to Egypt.  When the family returns to Israel, he goes to work in the temple garden. We continue to follow him as he passes from owner to owner and continues to ponder the events in his life and especially the meaning of the golden light he has witnessed.

The story is recursive: each incident adds another item to the list that the donkey remembers and ponders which grows longer and longer. This is from near the end:

“As he made his way into the city, Bethlehem thought of
the donkeys seeking comfort in one another,
the woodcutters struggling to make a living,
the village children looking for fun,
the farmer helping him find strength,
the peasants hoping for a bountiful future,
the merchants pursuing riches,
the vagabonds entertaining the villagers,
the students seeking knowledge,
and his family searching for safety…”

The repetition can get bit tedious, not only for me but even for Bella; mostly because there are so many items in the list by the end.

He is later the donkey that carries Christ into Jerusalem, thinking there is something familiar and special about this man. The crucifixion is not really dealt with directly in the story. The donkey is only aware of an earthquake and a great disturbance as angels challenge the forces of evil in a painting inspired by the fall of the rebel angels. A small circle with three crosses hangs in the background almost lost in the tumult and confusion. I think it rather works though. I like the oblique approach. The book ends as he meets the resurrected Jesus in the garden and recognizes him and finally enters into his rest and peace.

All the art in the book is inspired by various paintings from Pieter Brugel the Elder and is rich in detail and color. A nice touch is various events in the life of Jesus are in the background during these other scenes: the child Jesus in the Temple, the baptism in the Jordan, the temptation in the wilderness, the feast at Cana, walking on water, blessing the children, the raising of Lazarus, the sermon on the mount, etc. A list of these appearances is in the back of the book, with thumbnails to highlight Jesus. Also, this list explains which Brugel painting inspired each of Speirs’ paintings.

I really liked the fine art aspects of the book. It really reminded me of the pairing of Auden’s Musee de Beaux Arts with Brugel’s The Fall of Icarus that I studied in some long-ago poetry reader. Spiers uses that painting, in fact, replacing the figure of Icarus with Jesus walking on the water. The detail-rich paintings were fascinating to Bella when we read it last year, though I’m not sure she understood the more hidden meanings yet. 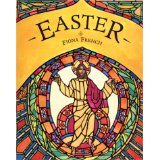 by Fiona French is a gorgeous presentation of the Easter story. She tells the story in twelve stained glass tableaux: the entry into Jerusalem, the Last Supper, the betrayal in the garden of Gethsemane, Jesus judged before Pilate, the scourging at the pillar, the carrying of the cross, the crucifixion, taking him from the cross and laying him in the tomb, the resurrection, meeting with doubting Thomas, the loaves and fishes by the Sea of Tiberius, the ascension into heaven.

The effect is rather like guiding a child on a tour of a church, examining the artwork and explicating it. Which is a plus for me as I love the didactic art in old churches. I especially adore stained glass and love the way French uses its conventions.

The text is taken from the Revised Standard Version of the New Testament, but the book doesn’t present the full text of the Gospel, just short passages of a paragraph or two that caption the picture. I like that it doesn’t water down the Biblical language with too-simple paraphrases and yet doesn’t overwhelm with too much text either. I felt like this book really opened up a dialogue with Bella, inviting her to ask questions.

The Tale of Three Trees: A Traditional Folktale

is good both as a Christmas and Easter book. It’s a fable about three trees, one of which is made into the manger, one becomes the fishing boat that carries Christ in the storm, and the third becomes the cross.

by Mary Joslin/ Gail
Newey
Children’s Stations of the Cross

by Nan Gurley/ Tim Jonke
Through the Eyes of John

I haven’t checked out either of the Stations of the Cross books because I wasn’t sure we were ready for them yet. We will do them next year for sure. I think Bella will be interested in doing the stations with me and Sophie might follow along too. We have The Giving Tree; but it wouldn’t occur to me to use it as an Easter book.

We’ve got Little Rose of Sharon. It’s not a favorite of mine; but it’s a sweet little fable about a rose who sacrifices her petals to save a baby dove. (I think it’s a bit too sweet and I don’t really like the portrayal of God the Creator; but that’s probably my own hangup.)

We’ve also read Petook by Caryll Houselander. It’s one of those books I’ve seen recommended everywhere, on all the Catholic homeschooling and mom blogs. But I must confess, it didn’t really grab me. In fact, it made me cranky when Bella brought it to me to the point that I seriously considered hiding it until it was time to return it to the library.

Why didn’t I like it? That was hard to pinpoint. First, the prose doesn’t feel right in my mouth. There are many fine images but there are also phrases, sentences, entire passages I want to paraphrase because they are too long or the wording feels clunky. But I don’t like paraphrasing so it isn’t fun to read.

The story doesn’t really engage me either. It’s not quite a parable, not quite a fable not quite a retelling of the gospel from an animal’s perspective. Rather it has elements of all of these and doesn’t satisfy me as it might if it stuck to one of those forms. I wished it had chosen to either be a parable about the resurrection or be a retelling of the Easter story as seen by a rooster. The Christ child as he appears in the story doesn’t resonate with me nor did the character of Petook the rooster. Even Martha the hen turned me off a bit when she was described as smug.

I was glad Petook was a library book because I didn’t want to have to read it over and over again. I know it’s a favorite with a lot of people, though, so don’t take my word for it. Probably it’s just a matter of taste and my being too picky.

Finally, here are a couple of books favorably reviewed by Karen Edmisten that I never checked out.

Anyone else have suggestions for Kathy? Or reviews of the books I’ve mentioned from Catholic Mosaic? (Or want to weigh in on why I’m wrong about Petook and Little Rose of Sharon?) Please share in the comments.