Lightning and Clouds Bless the Lord 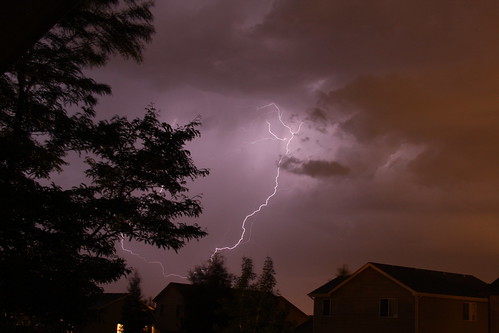 Arwen wrote recently about calming night fears with prayers. Tonight was one of the greatest night terror challenges I’ve faced yet as a mother. But we got through it eventually.

Just as we were tucking the children into bed, Dom had turned on the light and shut the door and I was beginning to sing them their lullabies when suddenly the wind began to howl, lightning flashed and thunder boomed and rumbled across the sky. It seemed to come out of nowhere. We had no idea rain was even a possibility. We don’t get often get surprise thunder bursts like this in Massachusetts, though they aren’t so uncommon in Texas. Bella, who is terrified by all loud noises, who runs for her room and slams the door when I turn on the vacuum, began to cry, hysterical. She scrambled down the ladder from her bed and into my lap where despite my calming words she continued to cry.

I said her Compline prayers with her, reminded her that thunder and wind and lightning are created by God, are his gifts to us, but to no avail. She wouldn’t get back in bed. In fact, she insisted on going out to the living room where she could watch the storm through the big window. And where she went Sophie followed, leaving the door open and poor Ben, who was not at all troubled by the storm, wondering what had happened.

I leveraged myself from my chair and went to soothe Ben. Once I thought I had him calmed, I went out to the living room to check on the girls, who were with Dom. He had the matter in hand, so I went to the bathroom. I came out to find the girls and Dom had gone to the office but in the meantime Sophie had gone back into the bedroom again to fetch something and had left the door open behind her. Ben was standing up in his bed and complaining. Poor tired boy. I resettled him again and went to find the girls. Dom had calmed them down and they were about ready to go back to bed.

Just as we were about to go into the room, lightning flashed yet again and Bella freaked out again. I grabbed a rosary and a small icon of Jesus for her, a small icon of Mary for Sophia and the bottle of holy water from the shelf. Tucked them back into bed after blessing them with the holy water. Then promised to sit with them for a while.

Bella asked if I could sing some songs about Jesus. I sang “Holy God We Praise Thy Name” then I pulled out my iPhone and opened the Universalis app. (Which, by the way has had a very nice upgrade recently. So much easier to use!) I navigated easily to Sunday’s Morning Prayer and read them the Canticle from Daniel 3: “O all you works of the Lord, O bless the Lord / To him be highest gory and praise for ever.” This canticle includes lines about lightning and clouds and winds and rain, I thought it might be comforting. After that I read Psalm 148, also from Sunday Morning Prayer: “Praise the Lord from the heavens, /  praise him in the heights.” I ad libbed a bit in the middle, adding a few extra lines after “stormy winds that obey his word” about lightning and thunder and rain.

Then I sang “God Father, praise and glory” and then sensing the girls were finally both calm and quiet I sat for a while and listened to Ben tossing and turning in his crib. After some minutes of silence, I gave them each a final blessing, and gave each a goodnight touch on the forehead,  noting that Bella was asleep, Sophie looked sleepy, and Ben was at least resigned to my leaving, and finally quietly stole out of the room.