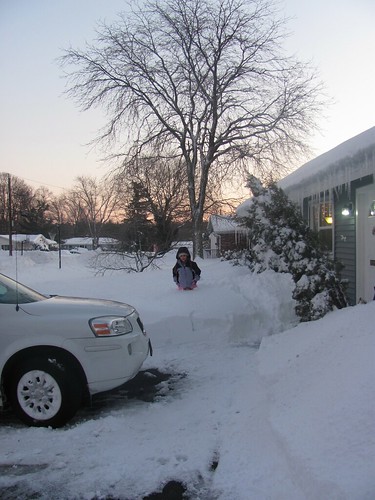 Bella in the snow

According to yesterday’s paper since the first snowfall of the season on Dec 21 Boston as had about 62 inches of snow all told. Comparing their total snow falls for each of the storms that has passed through with the snow we collected in the same storms, I estimate we’ve received maybe another 10 inches on top of that. That’s about 6 feet of snow so far this year. 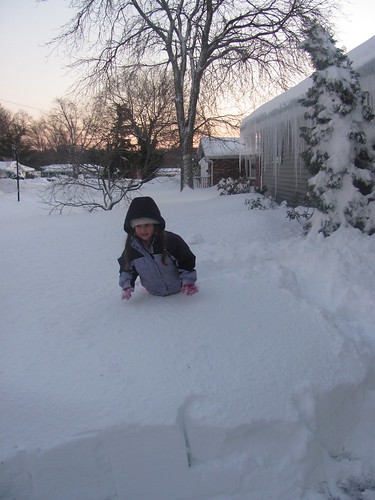 Bella is waist deep in the snow and there’s probably another two feet of snow under her boots.

Since the big storm that blew in the day after Christmas we have had a few thaw days when it got above freezing; but nothing that lasted long enough for the snow to melt all the way down to expose the grass. Each new storm dumps another layer on top of the one before. The result is that right now the snow in our yard is an average of three to four feet deep. 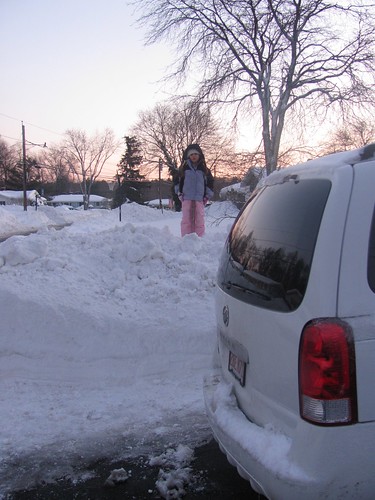 With the minivan for comparison, this shot gives you a better feel for how deep it is at the end of the driveway.

The kids have been pretty housebound because Sophie and Ben are too short to really navigate through the drifts. Bella has gone out into the yard to tramp around a few more times that the others two; but it’s not all that fun to play out there by herself. And me, I’m eight months pregnant and limited in my ability to take them out for supervised play in the yard. At my current weight and lung capacity, I can’t navigate the big drifts very well myself. I’m not really agile enough nor do I have stamina to tramp paths for them to walk on. 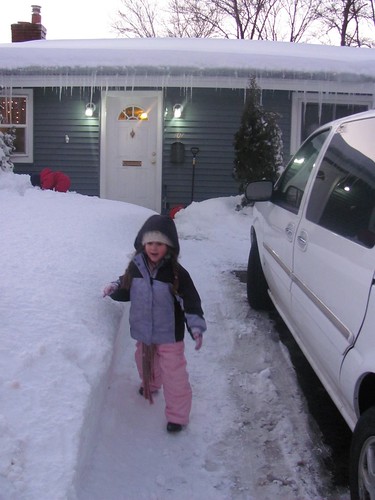 Bella in the driveway.

Thursday evening and Saturday morning the weather was nice and conditions were propitious we made excursions to play in the front yard. Thursday my sister was going out to help clear the end of the driveway where the plow had piled more snow before the sun set and the crew, beginning with (Ben who thinks she is the sun and the moon and stars) and all decided to follow her out. 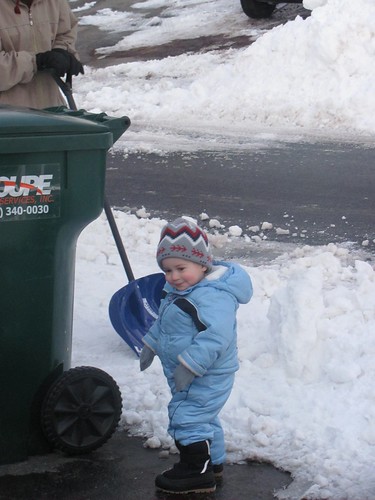 So I bundled everyone up into snowsuits and boots and hats and mittens and sent them out. Ben can wander up and down in the driveway and look at the passing cars. He thinks it’s marvelous. Bella can go tromp through the big drifts of snow and Sophie can do a bit of both. 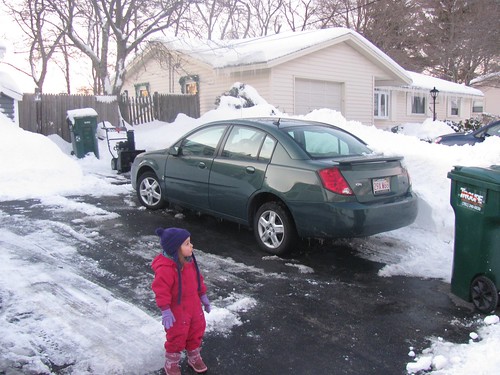 Sophie in the driveway

I thought about putting my feet up to enjoy the quiet but then decided I could use a little outing too so I put on my boots and coat and grabbed my camera to take some snapshots of the children at play. 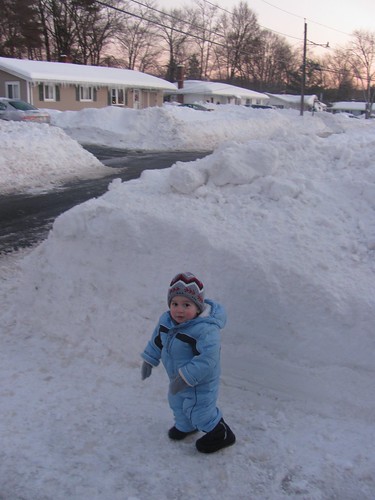 We had a fun time. Bella tramped down a snow slide for herself and Sophie to slide on. Ben watched his beloved Auntie Treese shovel snow and spotted some excellent vehicles passing. 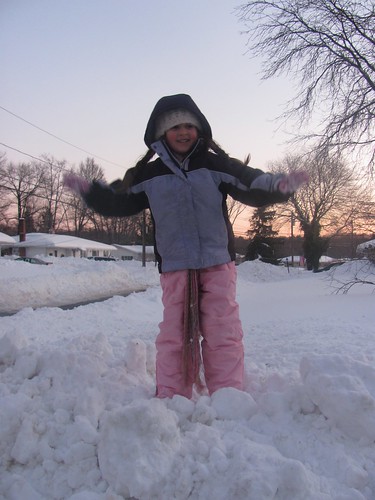 It was all fun, that is, until Sophie ventured too far off the beaten tracks and sank knee deep into the snow and lost her boot. She was in the middle of the yard where I couldn’t easily reach her as I was sinking down past my knee into the snow and afraid that the next step might be thing deep and I might get stuck myself. My sister went to her rescue but even she took several minutes to wade out as far as Sophie was. 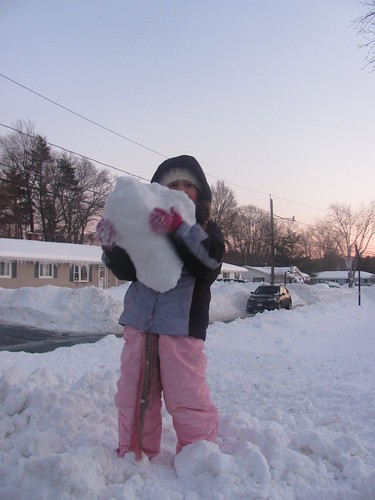 After that Sophie’s sock was soaked, the sun was almost gone. I decreed it was tie for everyone to go in and Bella threw a fit. I let her try to play in the backyard and that worked as a diversion for a bit until she decided she’d had enough. 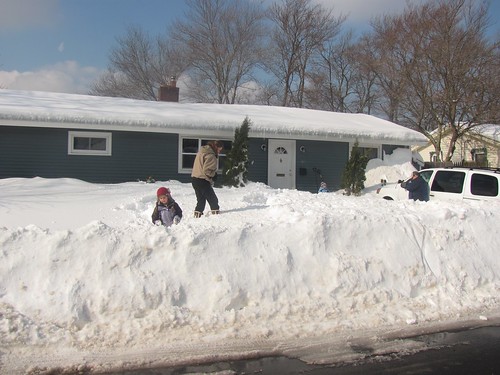 On Saturday morning the precipitating event was Dom taking the trash out. The front door was open as he went back and forth with several loads and little heads began to peek out. Bella decided she was going to go for it and began to scramble into her snow pants. Soon Sophie was following suit and then Ben grabbed his boots and jacket. Of course he protested mightily against actually being strapped into his boots but once he was outside he forgot his grievance and enjoyed the bright sunny morning and the freedom to wander at will. (He also took a few spills and hit his head on the car at least twice; but that’s par for the course for him.) 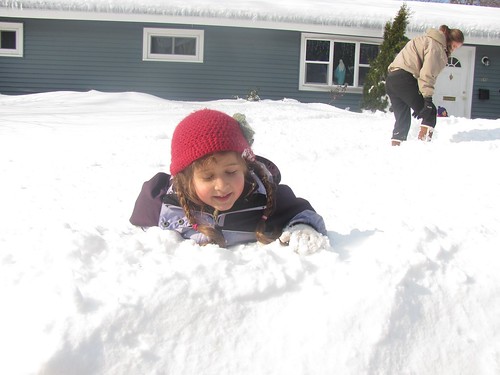 The snow had settled and compacted a bit since Friday and Bella and Sophie were better able to tramp along in the yard. Bella had fun laying down on the snowbank overlooking the road and peering down into the street below. What a perspective! 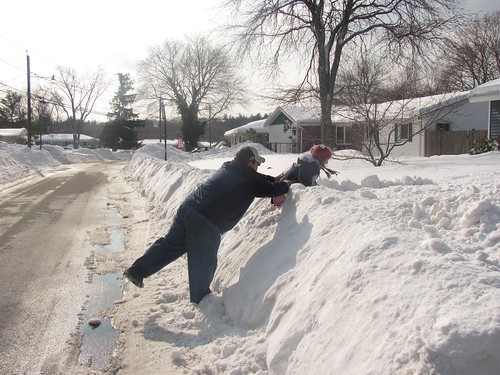 The girls pretended to have a snowball fight. 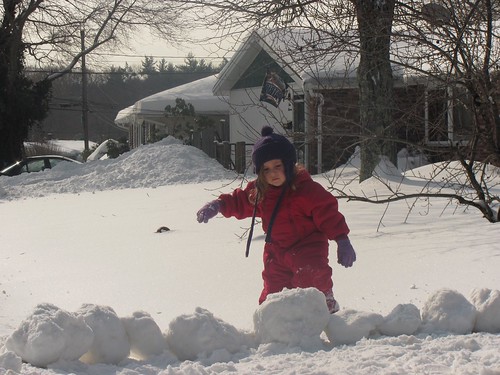 Sophie had found her snow legs and had such fun tramping about. 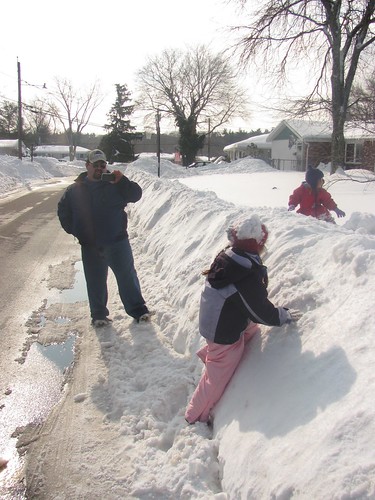 Then Dom helped them slide down the snowbank into the street. Oh what fun! 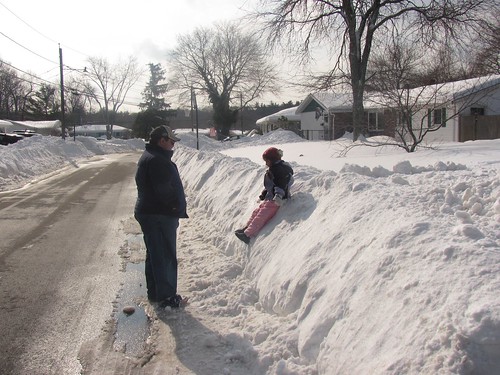 If I’d had more stamina, I’d have loved to make a snowman; but I know from experience with previous years and previous pregnancies that I lack the flexibility and would shortly be out of breath and most likely experiencing some Braxton Hicks contractions to boot. Sorry, girls, no snowmen this winter. Not if it depends on Mama’s help. 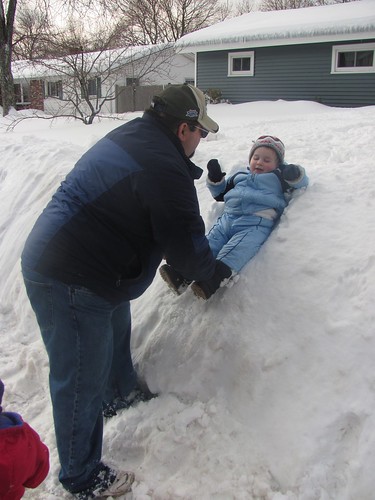 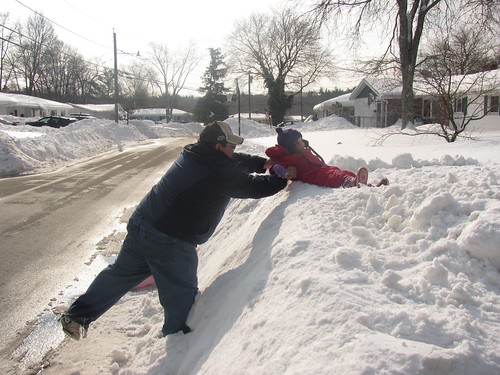 My poor mother, who is coming up at the end of February to help out when Anthony arrives, is looking at all these pictures and wondering exactly how much she loves me and her grandchildren. I tell you she is an absolute hero to leave Austin (where my computer tells me that today it is 78 degrees!) to come up here to the land of ice and snow and single digit lows. 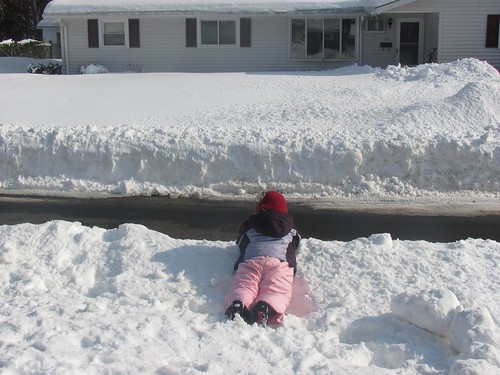 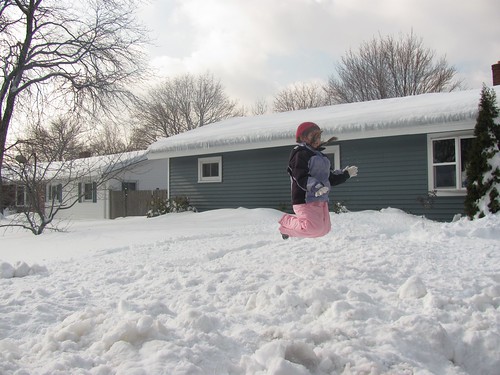