Of Fingerpaints and Playing Cards 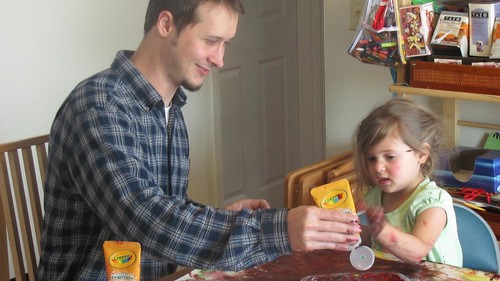 My brother and his girlfriend were in Pennsylvania this week visiting some of her relatives and to my great delight decided to drive up for a visit with us. Both native Texans who are not used to our Northerly weather, they were almost scared away from the trek by the threat of impending snow; but I am so very glad they overcame the fear, risked the highways and the eight hour drive and came anyway. 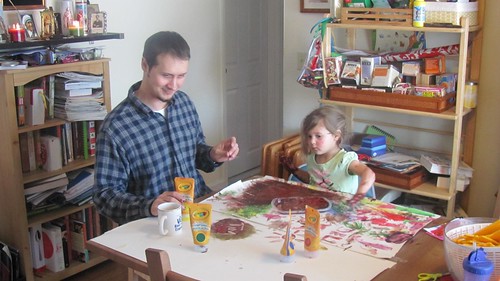 We had a wonderful visit, although it was far too short—two nights is not enough!—and far too long in coming. I haven’t seen my little brother since last February. A year is far, far too long between visits! But I am especially grateful as we were not able to travel to Texas this year, what with the nearness of my due date. 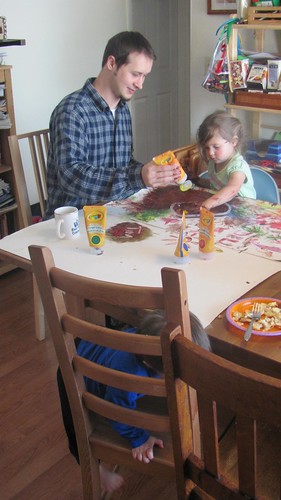 Both Tim and his girlfriend Amber were pressed into service reading stories to my insatiable little girls. Ben never fully warmed to the presence of strangers in the house; but he was starting to thaw a bit by the time they left and was willing to at least smile when Uncle Tim pretended to headbutt him. 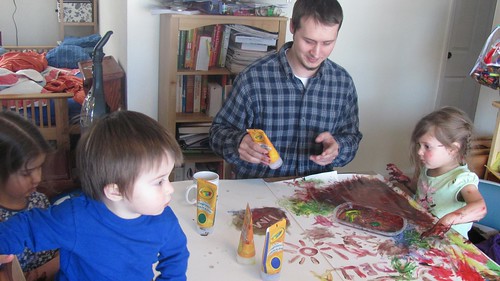 Yesterday morning the girls persuaded Uncle Tim to join them in finger painting. My brother is quite a good painter, if an older sister is allowed to say so. It is always fun to see him doing art, though finger paints are not his usual medium. It was even more delightful to see him interacting with his nieces, making pretty pictures for each of them and drawing their names. Oh such a delight. It makes me regret so much how far away we are and how seldom we get to visit. 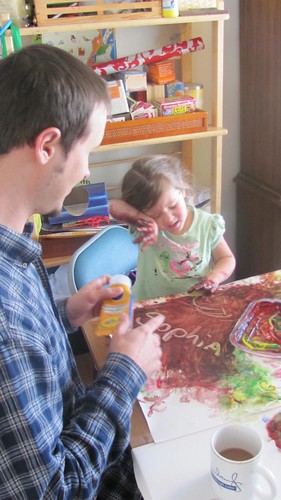 This morning they had to leave early to get back to Pennsylvania before the expected storm hit. Before I’d even finished my breakfast they were gone. All too soon. But as I rolled up my sleeves after breakfast to tackle the sink full of dirty dishes. it occurred to me that for once I was rather pleased at the sight. All those mugs testified to a lovely evening staying up far too late playing cards and sipping cocoa, talking and laughing with my brother and my sister. Just like old times. 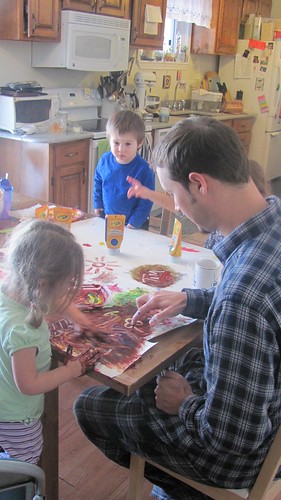 All that was missing was our baby brother, Stephen. Though he has made noises about maybe coming for a visit after Anthony is born. That would almost make up for not getting to go to Texas this Christmas. Almost. Of course, it isn’t the same when there’s only three of us. Something special about having all of my siblings together at one table. Such joy. 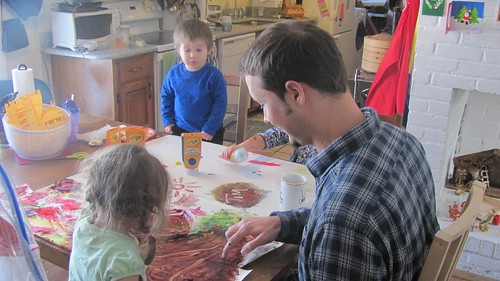 Bella was especially taken with the playing cards. I realized she’s never actually seen cards except in a book or on a computer screen. She sat in on the card game and pretended to play along with a second deck of cards. I’m actually not sure she realized she wasn’t playing the same game. 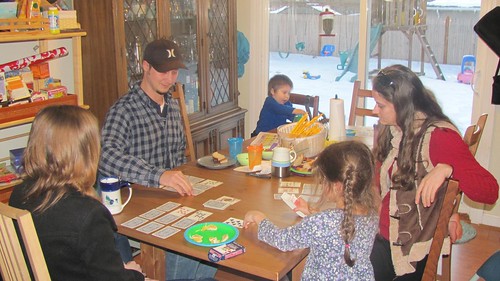 So now we’re preparing for more snow. I’m making a mental note to buy more fingerpaints next time we’re at the store and rounding up the scattered playing cards Ben tossed behind the television. And I’m resisting putting the sheets and blankets away. I don’t want to admit they’re really gone.