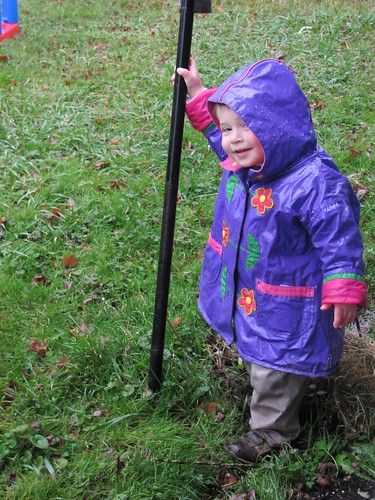 Ben has neither raincoat nor boots to call his own. He borrowed a coat of Sophie’s and got his sneakers wet and muddy. But look at that face!

While my Minnesota friends are digging out, we have rain. I let the kids go out and stomp in the puddles even though it mean Ben went down late for his nap. I mean really they haven’t been out in the backyard in at least a week. And when he did come in he fussed mightily at being changed into dry clothes; but then fell asleep in my lap within five minutes.

But really I’m not here to talk about the weather but about Advent. How’s yours going?

I’ve decided I might as well do one of these updates every week since people seem to like reading them and writing them makes me feel…. something. Organized? Well, at least writing this out means that my thoughts have a semi-coherent form on paper. Yeah, I’ve at least accomplished that.

So in my previous updates I forgot to mention the Advent Calendar. I had two of them that were given to us last year which I stored in the box with the Christmas books. But I forgot to get them out on Dec 1. And by Dec 4 or so it just seemed better to hold onto them till next year. It’s not like they will ever become obsolete. So that was a bust for this year.

My Advent wreath still doesn’t have any green on it because we still haven’t got the big bin of Christmas decorations out of the shed yet and for some reason that’s where I stored the bit of plastic garland I used to decorate the wreath last year after my fresh greenery started attracting fruit flies. Anyway, we’ll probably do the shed excavation next weekend when we get a tree. It occurred to me the other day I could probably just cut some holly branches from the bushes out front and use that. But that would require venturing out into the cold. Friday morning it was 3 degrees when I woke up. It had reached a balmy 17 when we ventured out to CVS to buy my prescriptions (and incidentally to purchase some presents to go under the parish’s gift tree.)

The parish’s gift tree. About that. I guess it deserves it’s own item. This will be my first time to participate in that tradition. I finally looked at the ornaments and realized there were things like disposable diapers and baby toiletries and crossword puzzle books that wouldn’t require me to make an extra trip to somewhere but that I could pick up at Target or the drug store. So I grabbed three ornaments on Sunday. I still need to wrap everything; but I’m really proud of myself for jumping in.

Also, I think it made an impression on Bella. She was collecting the plastic spoons from the drawer and putting them into a container so she could give them to a family who doesn’t have special spoons for the kids but they just have to eat with big spoons. 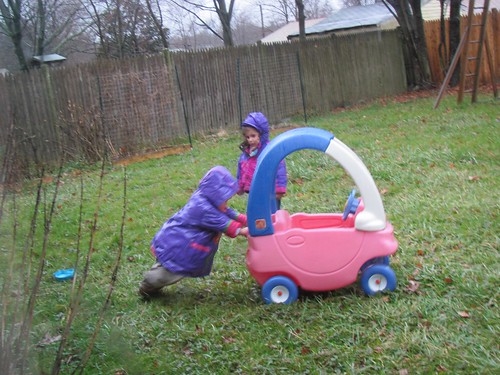 It doesn’t look very wintry out there, does it?

Yesterday Dom put up some outdoor Christmas lights for the first time since we moved into this house. It required a bit of work as we only have one outside electrical outlet. It’s in the backyard and thus requires a mammoth extension cord. Also, it requires someone to venture out into the cold and dark to plug it in and unplug it. We have no floodlight for the backyard.

I was just reminiscing with Dom about our first Christmas here in what Bella still calls “our new house”. I was so sick in the middle of my first trimester with Ben. We had no outside decorations and were rather depressed about the fact that we couldn’t figure out the light situation because one of the things Dom had been looking forward to in owning a house was doing Christmas lights outside. I remember writing about being sick and feeling so unfestive with no tree and no holiday decorations until the very last minute. By comparison this year I’ve got things so much more put together. It definitely helps that I’m in the beginning of my third trimester and not in that exhausting first trimester funk. I almost wrote that I’m in my second trimester and then realized I’ve only got two months to go till this little guy is born. In fact, on Wednesday we’ll probably start talking about specific dates for the c-section.

So anyway Dom found a huge extension cord and put lights on the two evergreen trees that flank our front door. He also bought icicle lights to go on the eaves; but the staple gun he got isn’t strong enough to attach them to the vinyl siding. So instead he strung a strand along the curtain rod above the front window (the one that I still haven’t hung any curtains on) and on the curtain rod above the back sliding door. It looks very cheerful and all the children are fascinated with watching the lights twinkle. 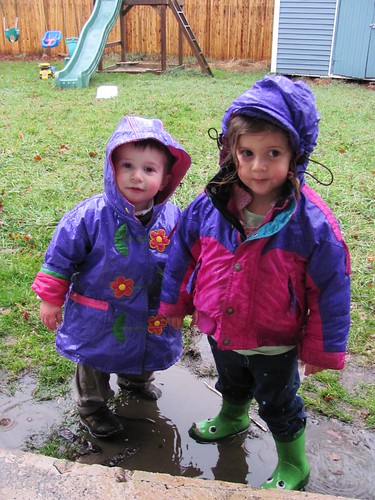 Ah but those are all the externals. Today I must also pause to take a different inventory. How well have I been preparing my heart? And I have to admit that there my checklist looks much less neat and tidy. I’ve kept meaning to find a good book of meditations to read, something to chew on and ponder. And here we are the third Sunday of Advent and I’ve yet to even pick a book.

So far all the Advent reading I’ve been doing is online. And not even much of that. Still, I have a few gems to share with you. This week’s links are from my friend Katherine at evlogia. Somehow she has the gift of writing what is already in my heart seeking for words to give it voice.

First, writing about a subject that is always near and dear to my heart: praying the hours:

Why do we so often think that something done poorly isn�t worth the doing? That�s just not so with prayer.

And I came close to giving up my habit, just because I couldn�t see past weak attempts and lost opportunities. But when you train your heart to turn with the clock, you find that prayer is possible just because the heart�s still telling time, even when the hour isn�t yours to take.

And it�s worth doing poorly because the goal isn�t to keep the rule perfectly, but to stop and turn to Him.

I love what Katherine says about pausing to pray even in the midst of busyness, especially about reading the prayers from the memory of the heart. I wish I had as much of the storehouse of habit as she does; but at my best I’ve never managed more than to regularly pray morning and evening. Maybe at most I’ve succeeded at adding one of the daily hours; but never managed that triple pause that I know would do me so much good. I’m pondering now how to find a way to be more regular, to stop as she suggests—as Christians have always done—at nine, at noon, at three. To pause and make room for Him. Pondering ways of preparing the room of my heart to receive the Guest.

I still haven’t made it to confession. Despite my New Year’s resolution to go once a month, it’s been months and months. Since before I found out I was pregnant. Things don’t look very spic and span in my heart. In this morning’s homily Father Matt told us that he went to the dentist for the first time in four years this week. He talked about the anxiety and guilt, the fear of the probing questions: “Why have you been putting this off for so long?” What a perfect analogy. I’ve been pondering how I avoid making doctor’s appointments in the same way I avoid confession. How I didn’t find a new OB until I was at almost 20 weeks. Change is so hard. Admitting we need help.

In Figuring Katherine writes about that as well, drawing a beautiful analogy between math work and soul work:

We like to think we can figure things in our heads and we trust that our calculating will lead us to the right answer. But the negative thoughts only make sense when they�re hidden. Once they�re exposed to air they die like a virus that can�t live outside the body.

And I think about confession, the mystery of forgiveness, and my head hidden under a confessor�s stole and two sinners standing before an icon praying. How I begin whispering all those thoughts, giving voice to all my botched figuring and the incessant inner dialogue that made so much sense before I actually heard it out loud.

Some will say that there�s no reason to confess to another, that I can just acknowledge my sins to Jesus. Just me and Jesus and how He already knows my sins and there�s no use in telling Him what He already knows. But in the world of my thoughts, everything muddled and confused, I�m more likely to dialogue with myself if left alone. And I need to learn all those things He knows about me.

So that’s on the agenda for the coming week: prayers, confession, some quiet time for meditation. What about you? How’s your Advent shaping up?