Immaculate Mary, Your Praises We Sing 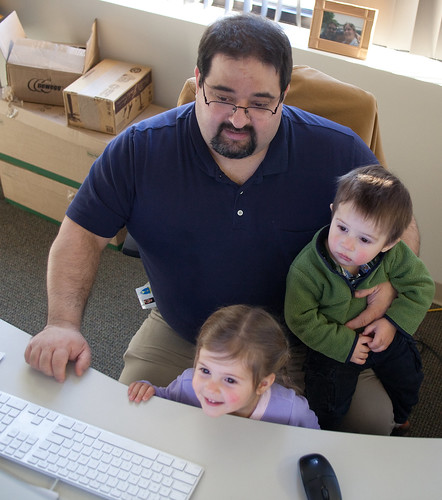 Ben and Sophie watched videos with Dom while I took Bella to the bathroom.

We managed to get out of the house early yesterday morning. Made it to 8:15 Mass at the Pastoral Center, aka “Daddy’s work”. It was a beautiful Mass, simple, prayerful. A little surprise at the beginning as Father turned and smiled at the children and welcomed us specifically by name. I suppose we do stand out, being the only family with children. The girls were thrilled to sing Immaculate Mary and Hail Holy Queen. I’ve been singing Immaculate Mary as a bedtime lullabye and so Sophie and Bella know it well.

After Mass one of the sisters who run the gift shop gave each of the kids a little ceramic baby Jesus. So cute! The girls didn’t quite know what to do; but were very taken with their presents. This isn’t the first time the sisters have given them little gifts. Also, the kids, who were all excellently behaved, got donuts because one of Dom’s co-workers had brought in a big box. They were very, very good donuts.

After Ben and Sophie finished their donuts, they ran around and Sophie sang nursery rhymes, especially Ring Around the Rosie. Ben joined her in falling down on the floor. Then, as it was still early, we headed to the library and made it with plenty of time to spare before story time. I hadn’t pre-registered us; but the benefit of being regulars is that the librarian just threw them in. All the morning librarians know the kids by name. The story time theme was snow and after the stories and songs, the girls painted snow flakes while Ben watched.

A sweet moment in my day. A grandmother, who has been bringing her granddaughter to story time as long as we’ve been going and who was there with the granddaughter and also a grandson,  was watching as the children sat on their mats and listened to the stories. Ben was sitting at the back of the crowd pulling off his shoes and socks and we were laughing at his antics. Then her little grand-daughter rocked back and accidentally kicked Sophie in the head. Grandmother gasped; but Sophie didn’t react at all. “Oh she’s used to being kicked. ” I said. She laughed and observed that one of the advantages to children who are from large families is that they aren’t fragile and can take knocks and falls in stride. She offered the information that her grandson was the fifth and her granddaughter the sixth in their family.

It was a little thing; but her comment coming out of the blue like that suggested that she’d noticed my growing belly and inferred that I might be feeling a bit self-conscious about having four small children. This was her way of letting me know indirectly that she approved of larger families and reminding me of the advantages of having lots of children. Later she said something else about the benefits of larger families. I was really touched by her kindness.