Get in the Box 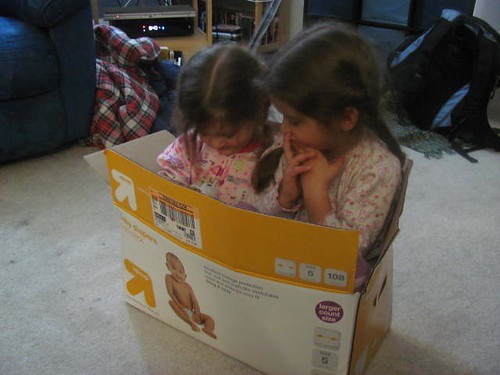 Sophie can be a very stubborn two year-old and trying to cope with her whims can be incredibly frustrating. Recently I’ve rediscovered the power of redirection as a parenting tool. In this case, though, the redirection is less about refocusing the children’s attention and more about refocusing my own. In short, I’ve learned how much more effective it sometimes is to enter into Sophie’s imaginative world rather than trying to snap her out of it.

One of her current favorite fascinations is pretending to be a baby. When she’s playing at being a baby, if I address her as Sophie she gets quite upset, digs in her heels and refuses to do anything I ask. She won’t come to the table for dinner, she won’t get dressed… she just won’t. But if I call her “Baby” and start talking in baby talk to her, I can get her to do most anything. I was very resistant at first. I don’t like to talk baby talk to older children. But it became clear how important this pretend was to her and how blissfully happy it made her when I entered into it and played along. As soon as I respond to her request that I call her “Baby” and she realizes I’m playing with her, she smiles the most blissful little smile that absolutely melts my heart.

I suppose it’s a form of regression. The kind that is to be expected with the advent of a new addition to our family. And so I reassure myself that it won’t last forever. 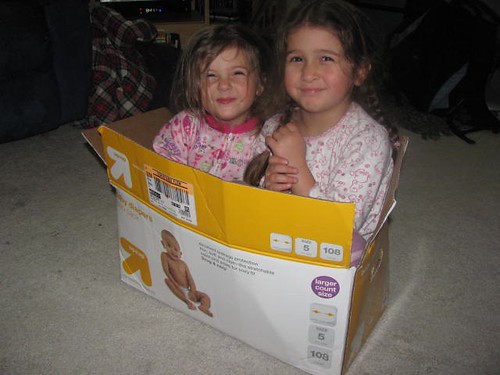 Today I had a few more opportunities to witness how effective this tactic can be. The first was at nap time. When the clock rolled around to that time of day the girls were busily engaged in pretending that the couches were trains. Sophie was quite comfortable tucked up in her train car with a pile of blankets and had no desire to be shuffled off to her bed. So instead I made the first move of asking if I might read to her on the train. I found myself boarding her car and snuggling up next to her for her favorite book of nursery rhymes. Then afterward I convinced her that her bed could be another train car. She happily allowed me to carry her blankets into her room and read her a story and then tuck her into the train car for her nap. 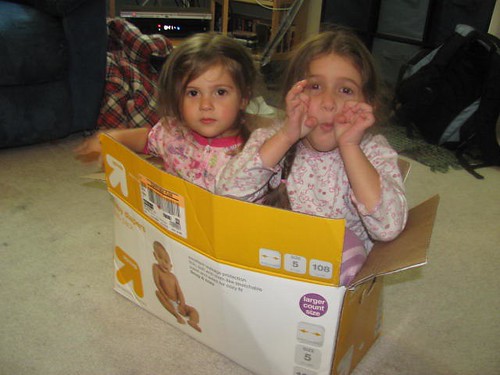 Tonight at bedtime when Bella went to go brush her teeth Sophie balked and refused. I was afraid we might have to give up the teeth as a lost cause for tonight when she declared that she wanted to cuddle with me and proceeded to pile up her blankies on my lap and climb aboard my chair with her little stuffed puppy dog in tow. But when Bella was done and Dom came to fetch Sophie for her turn, I had a little flash of inspiration: “Does puppy dog want to have his teeth brushed?” She was delighted at the idea and agreed that she’d have her teeth brushed after her puppy dog. So she happily followed Dom off to the bathroom. 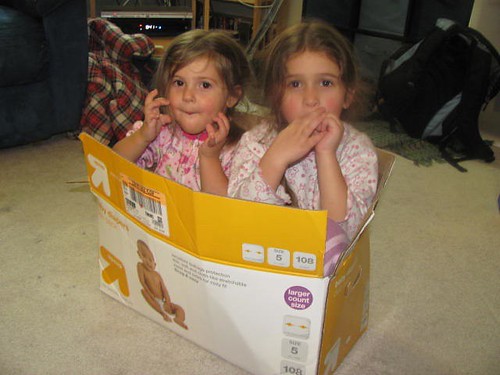 Meanwhile, Bella announced that she wanted to go back to my room to sit in the empty diaper box. (Where she’d evidently been before Dom brushed her teeth.) I was about to refuse before I noticed my double standard. Why was I willing to indulge Sophie’s whims but not Bella’s? So I allowed her to bring the box into the living room and agreed with her plea that she could stay in it during our bedtime prayers so long as she actually joined in and said all the prayers with us. If she got distracted, the box would have to go.

She climbed into the box and when Sophie was done with her teeth she joined Bella. The two of them happily crowded into the small box and actually did a pretty good job of paying attention to prayers. Of course the box tipped over a few times and there was at least one little squabble. But on the whole they were a little less distracted than they have been when they were free to wander about the room. 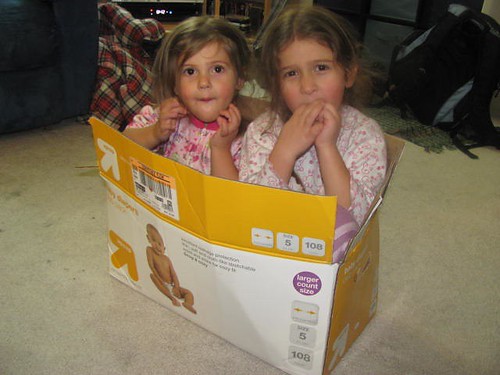 I just think how when we moved into this house two years ago Sophie was a baby who could hardly sit up and Bella mostly played by herself. Now the two of them play together and even let Ben join in now and then. What a sweet little world to observe. I usually just sit back and do that. But it is fun to occasionally get caught up in the action myself and enter into their little world. I could say I was thinking outside the box; but I prefer to think of it as climbing into it. After all, with the girls in control, I never know what the box is going to be next.