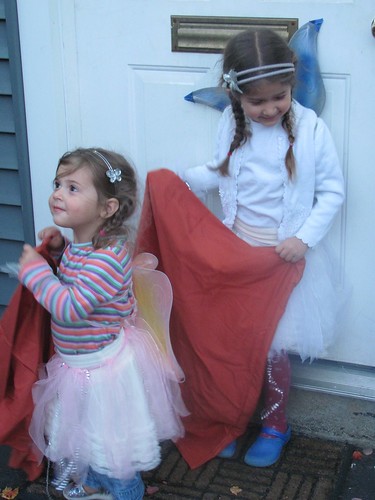 For one reason or another I’ve never taken the kid trick-or-treating. After watching the kids come to our house last year, Bella was determined to dress up and go out this year. 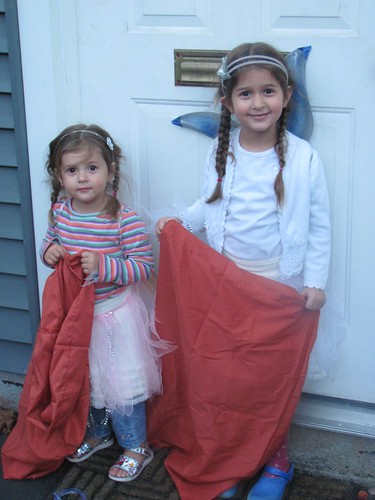 I wasn’t feeling up to much in the way of making costumes; but I’m really not a fan of most off-the-rack stuff. At least not in our price range. Happily, the girls were satisfied with wearing their Renaissance Fair butterfly wings. I bought a couple of cute skirts and let the girls pick sparkly headbands at Target and they were quite happy with the results. And all the neighbors thought they were super cute. I didn’t bother with Ben because I didn’t think he’d come but when it came time to leave he wouldn’t be left behind. My sister carried him and he just kind of watched quietly. A few people tried to give him candy and he clutched a couple of mini bars. They went home, chilled and tired before the girls and I had finished our round. 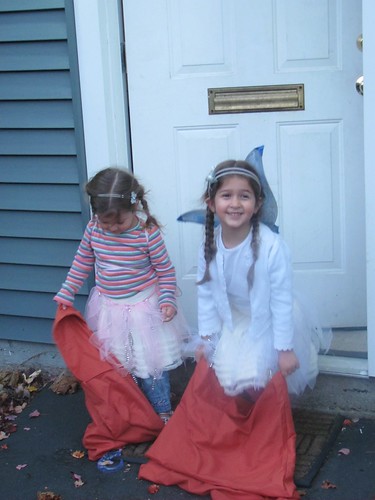 At first the girls were a little uncertain; but after a couple of houses they started to get into it. They’d arrive at the door and start chanting “Trick-or-treat,” before they’d even knocked at the door. I often had to remind them to say “thank you,” though they did remember about half the time. Soon Sophie was leaving each house chanting, “Go to the next house!” Her enthusiasm was contagious as she bounced us from one lighted door to the next. 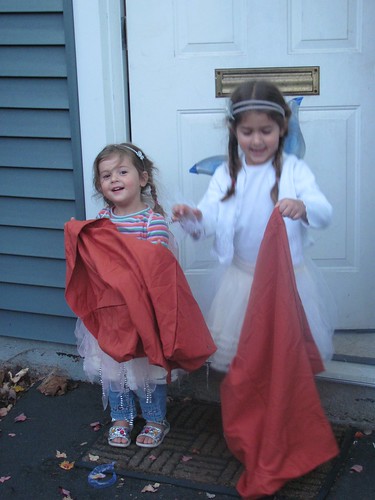 It was nice for me to get the chance to meet some of the neighbors—one neighbor even recognized us and introduced herself—and to chat a bit more with some of them I’ve met before. Many of the houses we visited I had no idea who lived there so it was fun to get a little peek at the people I’ve never seen except as they drive by in their cars. 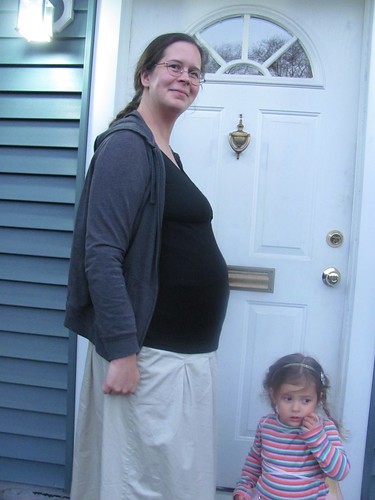 I went as a pregnant mom. 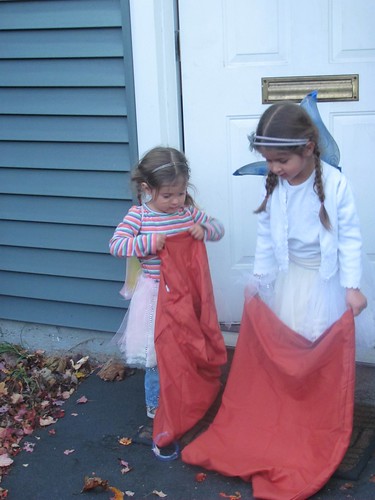 These orange pillowcases the girls were using were the result of a mistake. I found a great deal online; but there was no way to choose the color. I’ve got to say orange is perhaps my least favorite color. I’ve only used them a couple of times as our bedding color scheme is blue. But the pillowcases were perfect for the holiday. Sophie could have fit in her bag and had a bit of trouble getting it open at each door; but she never complained.

We had chicken enchiladas with mole sauce for dinner. Somehow that seemed appropriate as a prelude to the chocolate fest. We didn’t do much for Dom’s birthday today. I’m not good at juggling two celebrations plus getting to Mass. So we’ll go out for dinner tomorrow and give him his presents and have cake then. Though it seems crazy to have cake on top of all the candy.

Tomorrow I’ll try to take the kids to Mass for All Saints. Since it’s not a holy day of obligation, we’ll have to go to the 9 am school Mass. Dom’s got a gig at the cathedral tomorrow—they’re recording the 8 am Mas with Cardinal Sean—so we can’t go to Mass with him. I’ll see if I’m up for going solo. 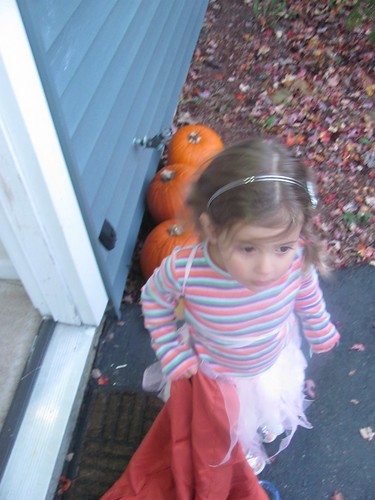