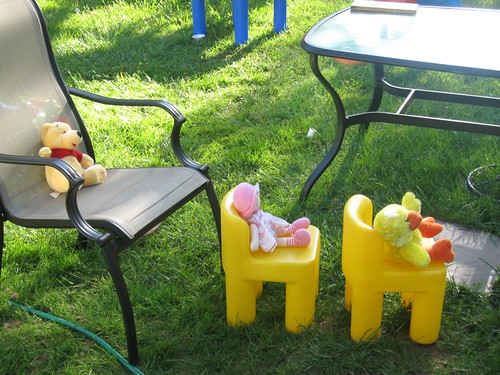 Wow. Have I really not posted anything here since Sunday? I have a bunch of blog posts I’ve started but never finished. But of course you can’t see that from out there, can you?

I apologize to everyone who follows my Twitter feed or is friends with me on Facebook, since as usual most of my quick takes are just cribbed from there. But I’ll add some new photos so y’all can just skim the text to see if I’ve added any new details (I do try to expand a bit since Twitter of course keeps me a bit short on details.) and look at the photos.

I’ve also been slacking on photo taking recently, so the pictures are from back in May when Bella arranged the various outdoor furniture to make a train for her dollies. I’ve been meaning to post them all summer but somehow never got around to it. Look how much Ben has grown!!! 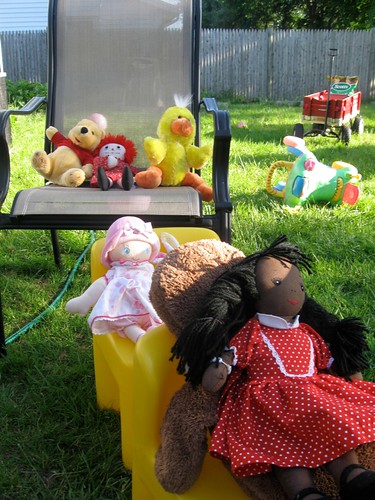 Immediately I thought: Did I really just say that?  But I’ll have to agree with her my Brussels sprouts with bacon and cider vinegar are better than boiled cabbage any day. (Still, every once in a while I do get a hankering for boiled cabbage. Go figure.) 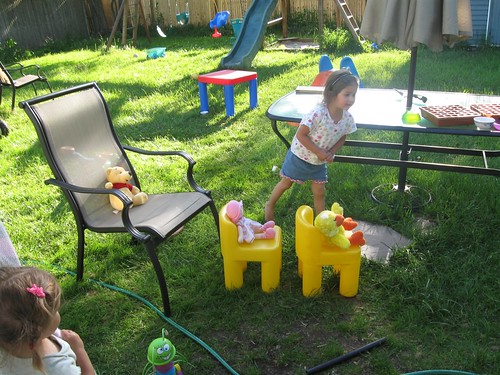 The other day when we were at the grocery store Bella said that she wants Gina and Jane (her imaginary daughters) to have a brother named Sue. Ok, who’s been playing her Johnny Cash? Seriously? Theresa, I’m looking at you. 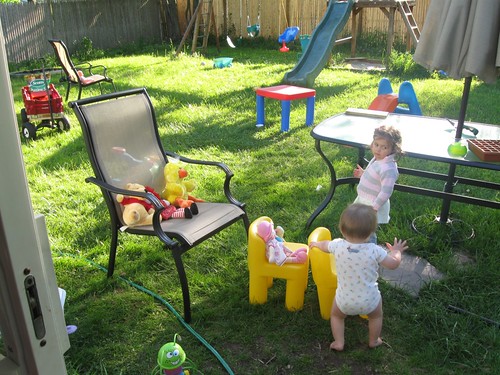 Argument at the breakfast table as the girls are eating their toast:

It ended it tears, of course, as Bella was very upset that Sophie wouldn’t agree with her. I had to find a diplomatic way to tell them they were both right. 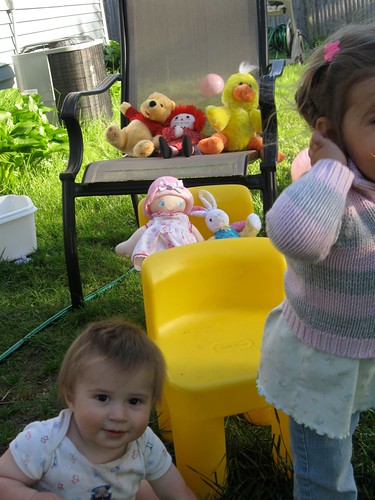 Ugh! The drama of this week has been that we discovered that we have pantry moths. They seem to have got into almost everything. We had to toss a whole bunch of pasta, bags of pecans, flour, beans, rice, etc. Two garbage bags full. Then we invested in a bunch of heavy duty airtight plastic containers. The moths were in some sealed ziploc bags and some cheaper plastic containers. Evidently they can eat through plastic.

We also threw a bunch of other stuff that didn’t seem to be infested in the freezer, hoping to kill any eggs that might be there before they could hatch. But we ran out of room in the freezer pretty quickly.

Poor Dom has been working late every night and then had to come home to a hysterical wife who refused to cook dinner until he’d emptied out the pantry shelves and tossed out all the infested packages. My excuse: while I’m finally into the second trimester with a blessed diminishment of exhaustion and nausea, I still have a very sensitive gag reflex. And I hate, hate, hate insects in my house. Ick! 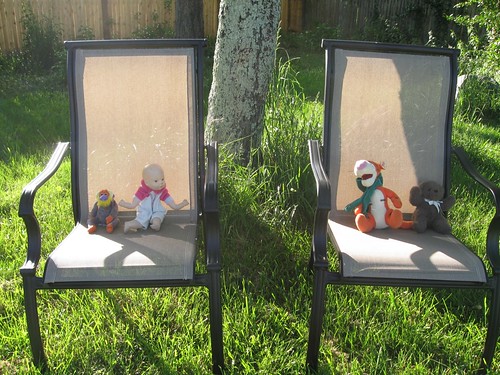 This week somehow we’ve had a huge surge in our nature study interest levels. (Or I have at least) Maybe it was reading Karen Andreola’s A Pocket Full of Pinecones.

The other day while sitting in with the girls in the yard we saw a hummingbird check out our feeder and then wander about drinking out of half a dozen of the hosta flowers. And Bella asked some questions about hummingbirds, which I did my best to answer. Then we watched some bumblebees and more questions. She said she wanted more books about animals (like the ones she already has from the Smithsonian’s Backyard series) for her birthday. It ended with my going to my computer and placing a bunch of books on hold at the library.

Today we’ll be picking up our library books on honeybees, bumblebees, and hummingbirds. Bella is quite, quite excited.

We’ve also had a bunch of new birds show up at our feeder. In addition to the titmice, goldfinches and sparrows we’ve been seeing all summer we’ve seen some chickadees. Yesterday a little wren was perched among the sparrows on the back step. I almost thought it was a sparrow till I noticed the long beak. Also yesterday we saw what I think was a nuthatch on the tree in the back corner.

Today I spied a bird I didn’t recognize at the feeder but it darted away before I could get a good look.Maybe a female chickadee? It was very small and drab. Anyway the changing of the seasons is reviving our interest. Bella is already looking forward to our winter juncos. “I miss the juncos,” she said this morning.

I will post reviews of some of those picture books from the library and also of A Pocket Full of Pinecones. Hopefully sooner rather than later. 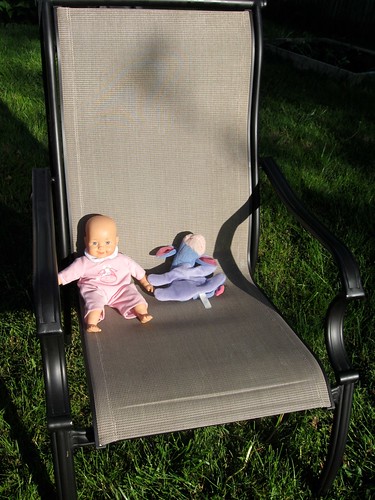 This morning I woke up to rain. The kind of New England rain that looks like it will linger all day. Great! I thought. Kids inside all day. Won’t that be fun. But before I’d finished my breakfast, they’d opened the door and wandered out. Ben wearing just a diaper. The girls of course had to change their clothes after and I had to towel them off and dry the floor near the door. But oh how worth it to get them OUTSIDE for a bit!

I pondered how far I’ve come since the days when Bella was my only and I agonized over the least bit of mud or wet on her clothes or shoes. (Of course she was the kind of child who also agonized over it.) Then I discovered why people around here buy rain boots. And how important it is (For mom’s sanity) for small children to get out even in the “inclement” weather. 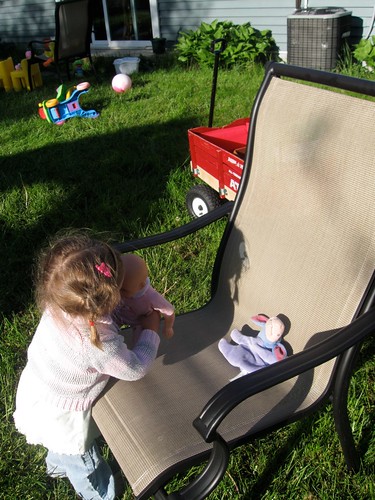 When we came back from the library this morning, I stuck Ben in the high chair while I scurried to get the girls crackers and peanut butter per their request. He had some crackers and cheerios and some milk to keep him happy. By the time I looked around to offer him some cheese, he was falling asleep. Poor baby managed one bite of cheese and then couldn’t keep his eyes open any longer. I hope he doesn’t wake up from nap early because of hunger. I think he really is ready to gie up his morning nap. At least on six days of the week. On the seventh it seems to catch up with him and he does this falling asleep at the table thing. It is ridiculously cute. 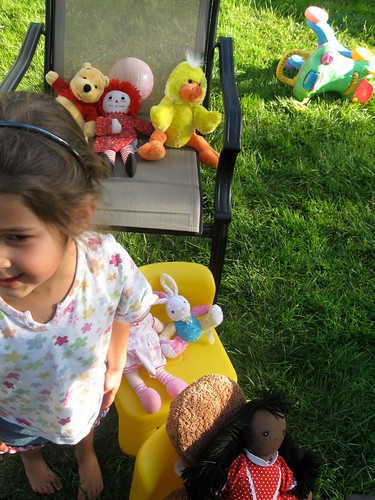 Well, that’s all I’ve got today. Visit Jen to read more Quick Takes or to submit your own (and to see the hilarious picture of her Dukes of Hazard move getting into her minivan via the window because of the stuck door.) Have a great weekend, everyone.