We’ve been hoping for a while to get Ben out of the portacrib in the office and into the crib in the girls’ room. The first step in that process is to get Sophie out of the crib. And for that to work in the limited space we have, we needed bunk beds.

Finally we had a little extra money come in and we could afford to do what needed to be done. Last Saturday we went to Ikea to get the bunk beds for the girls. It was a major expedition for the whole family; that took the whole morning. The girls were in heaven, though. Ikea is fun for kids as long as you stick to the kid’s furniture sections… and the food! 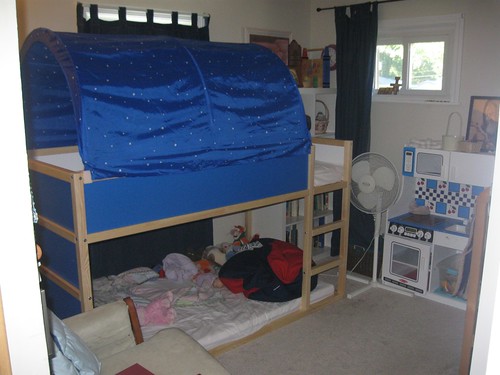 This past Saturday Dom and Bella went back while Sophie and Ben and I stayed home and they got two big bookcases. Since they will be holding mainly things other than books, I suppose I should call them shelving units; but that is so cold. So bookcases it is. The bookcases will replace two dressers the girls’ clothes were in and a small bookcase that held books. They give us almost twice as much storage space because they are so much more vertical. Also it doesn’t hurt that I pruned the girls drawers quite drastically. I’ve been needing to do that for some time. 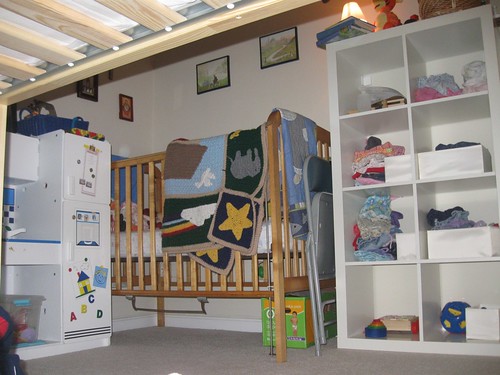 While Dom and Bella were out shopping and getting free breakfast at Ikea, Ben took his nap and my sister and I rearranged some furniture and did a quick clean out of the girls’ room. (I’m actuall not sure what Sophie was doing while we were rearranging things. Not getting underfoot too much and being generally not a nuisance, I suppose.) Yay for sisters! With her help, it didn’t take much time at all. 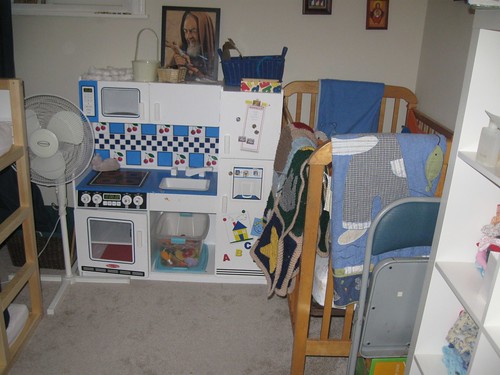 I am so excited because we finally have room to put all three kids in one room. We also finally have room for there to be a space for all the toys and books and clothes. (Well, except for the boxes and boxes of baby clothes and out of season clothes for the girls that I removed from the closet. They will be sorted and reboxed and given away or stored in the shed.) 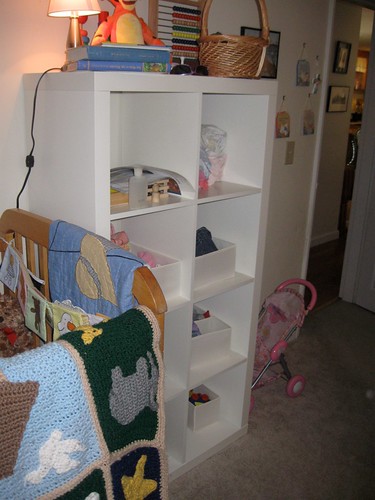 I still want to get baskets to contain the girls’ clothes; but I do think this looks very nice as is. Ben’s toys are on the bottom shelves. Then Bella’s clothes are on the left and Sophie’s on the right. Bottom shelf for shorts, pants and skirts; top shelf for tops and dresses. Top right shelf is for pajamas and spare sheets. 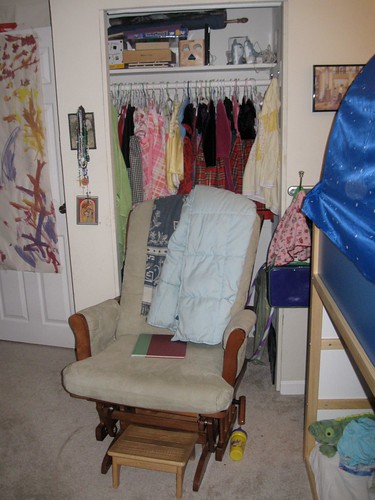 My rocking chair is in it’s old place. For a while I thought it wouldn’t fit with the new configuration. The closet behind it hold the girls’ Sunday dresses. And on the top shelf are some puzzles and games with small pieces that I don’t want scattered all over the place. The girls can play with only one thing at a time. Since Bella can reach them by standing on the chair, only Sophie really has to ask to play with them. 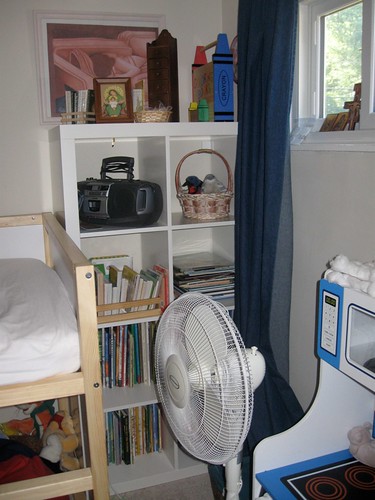 This shelf has about the same footprint as the old bookshelf; but it is twice as tall. All the books fit easily, plus now there is space for so much more! Bella has a little spot on to to store her treasures. 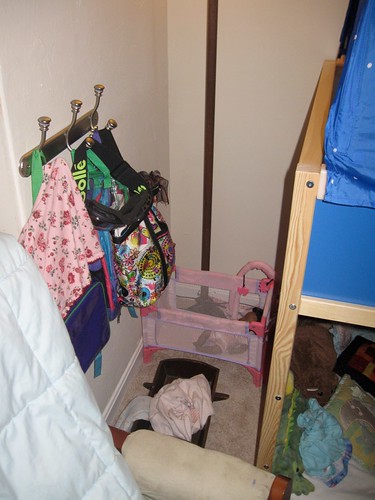 At the other end of the bed there was a little space. We didn’t really want to pull down the hooks to shove the bed all the way into the corner. Also, I realized that it made a nice little nook that is the perfect place to park the bassinet and cradle. A little dolls’ bedroom, if you will. 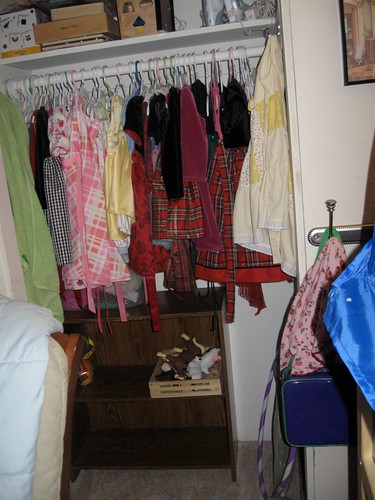 Here’s a close-up of the inside of the closet with the chair pulled away so that you can see the former bookcase now re-purposed to hold toys. Formerly this space was jammed with bins of baby and toddler clothes. Those bins are now all over my living room waiting to be sorted. I guess I traded one mess for another! Since they are in the middle of the room, I now have a much greater incentive to actually deal with them. 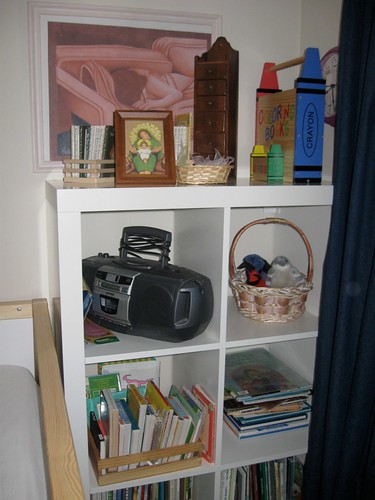 Here’s a closer look at the top half of the bookcase. I love the way stuff that was formerly crammed on top of Bella’s dresser now makes a neat vignette. Bella loves that she can so easily access her stuff. 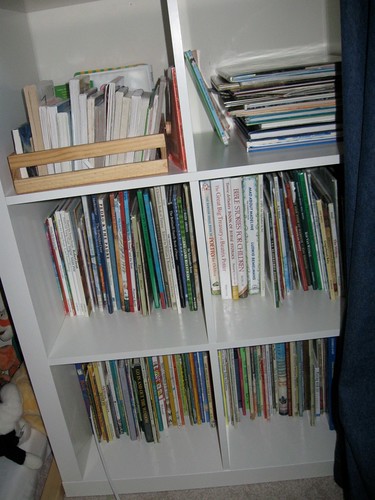 And here’s the bottom half of the bookshelf. I plan to replace the floor fan with something smaller that can sit on top of one of the bookshelves so this space will be a bit easier to access. It’s cozy but not hard to get at the books when the fan is not there. I’m thinking the board book basket might better be moved down to where Ben can actually reach it.

If you click through to the Flickr album, I’ve added additional notes to some of the photos.

I can’t believe I had the energy to do all this. I also can’t believe how much finishing this project has energized me to do more around the house. (Also, having a new vacuum cleaner has improved my housecleaning drive tremendously.)