The Toy Manifesto: In which I attempt to articulate a philosophy of toys.
2 comments
Share:FacebookTwitter
Uncategorized

The Toy Manifesto: In which I attempt to articulate a philosophy of toys. 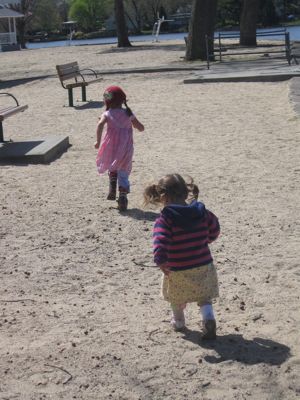 I know I have plenty of strong opinions about toys; but I’ve never really tried to spell all of them out in any sort of methodical way. Participating in this discussion about Barbie at Kate Wicker’s blog has got me wanting to sort through them and give a reason for the convictions I have.

It should go without saying—but I’ve got enough years logged on the internet to know it probably needs to be said anyway—that this is just my working out and explaining what works for me. I mean no criticism of you or your tastes or your parenting if you welcome and heartily embrace any of the toys on my black list. (Just, please, don’t give them to us.) 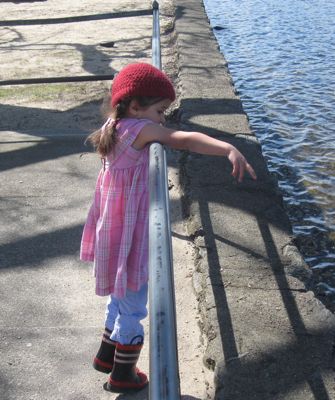 1. Natural is better. To me cloth and wood are always and everywhere preferable to plastic. I’m not sure if this is merely an aesthetic preference or if there are deeper principles that are at play. I just know I feel strongly about this and have for a long, long time.

Although I might add that with all the scares in recent years about unsafe toys from China, there does seem to be a pragmatic health component to preferring natural toys when you’ve got a wee one who is constantly putting everything in his mouth.

Note: This does not mean I never buy plastic toys; just that I have a strong preference. We bought Bella a plastic tea set for Christmas because I don’t think the girls are ready for porcelain. 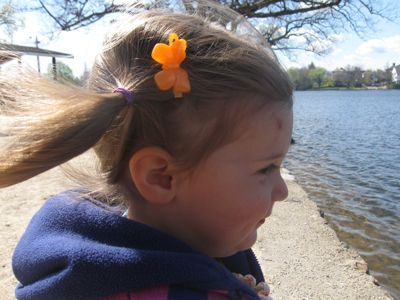 2. Handmade and unique is better than pre-fabricated and mass market. This is really just an extension of #1. But I do think it deserves its own line item as you can have mass market wooden toys or cloth toys.

Again, this is a preference and you wouldn’t necessarily know it looking at our toy collections. 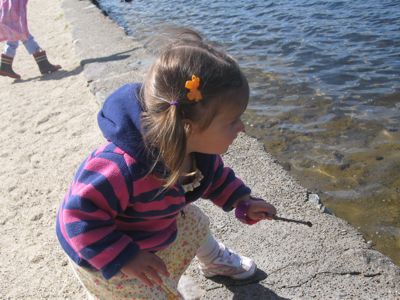 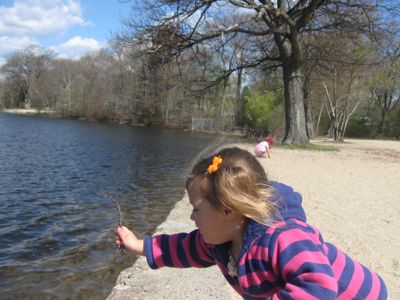 4. No batteries required. No flashing lights or bleeps and beeps and blips. No musak for babies. No push the button to get your daily dose of positive reinforcement.

I’ve got a hermit’s soul, I think. I like quiet. I hate noise. I can go days, weeks without turning on music or the television. I tend to get angry and resentful when my neighbors pollute my air with their noise pollution. But I’ve written at length about this before.

One other thing I’d add is that most of the time battery-operated toys are the worst offenders in not being open-ended. They demand that you push a button and push it again and push it again. Then you listen to the prompt and push another button. There’s a right way and a wrong way to play with them.

This is my primary complaint about the Leap Frog line of products. They may be educational; but all the information they convey can be conveyed to my children in other ways. I don’t like the mindless repetition of the script. The voices drive me crazy and I’d much prefer to use bedtime stories and alphabet magnets to prepare my children for literacy than speaking toys and talking games. 5. I’m allergic to anything that at all ties in with a television show or movie. That includes Disney Princesses, Barbie, Dora, Barney, Elmo, and any Winnie the Pooh products that don’t look like the E.H. Shepard illustrations. (It will probably also extend to the American Girl dolls when the girls get to that stage.)

In general my mom didn’t encourage us to have any toys that you’d see advertisements for on television. No My Little Ponies or Strawberry Shortcake or Holly Hobby or Cabbage Patch Dolls. Unless we got them as gifts; but that almost never happened. There were plenty of ties when I bristled and argued; but she stood firm and in the end I inherited her strong suspicion of merchandising. In fact, I usually go further than she ever did.

My feelings about this are quite strong and extend to clothes as well. When the girls are given bags of hand-me-downs I usually weed out any clothing that has tv characters on it.

And while I’m ranting, can I tell you how much it irks me that there isn’t really a good, character-free generic option for Pull-Ups? The off brands are just not well fitting or absorbent enough so we’ve had to put up with the dreaded Disney Princesses in this one instance. 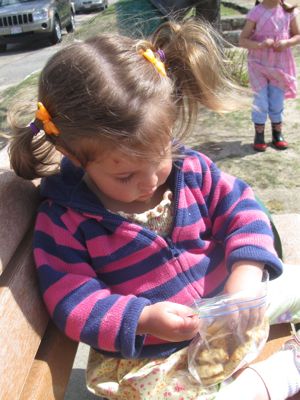 6. Fewer is better. (Also known as the Laura Ingalls Wilder Principle or the Charlotte Rule.)

Wouldn�t it be nice if each of our kids only had one toy but it was a really, really treasured toy – like Laura Ingalls�s beloved doll named Charlotte? (I wish that part of Laura remained deeply planted in my daughter.)

I often wish my girls could have just one beloved “Charlotte”. But that’s not going to happen with generous family members who bring gift bags to almost every social occasion. The best I can hope for is not to drown in toys and to weed out some old toys every time we get some new ones. 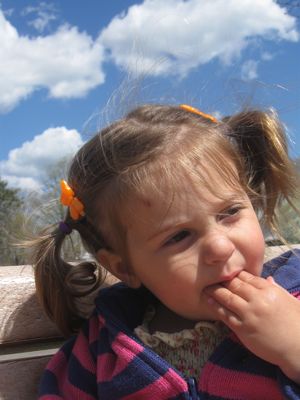 7. What’s wrong with Barbie? (Some of the special issues with Barbie mean she gets her own category. This is probably the result of sloppy thinking; but I’m too lazy to edit this and tease these out into the separate categories.)

We never had Barbies when I was a kid and I don’t recall ever missing them. Except maybe just because I felt odd sometimes that I was the only girl I knew who didn’t have them. I never wanted Barbie for herself, she was always an icon of fitting in, of keeping up with the Loris and Jennifers.

I worry about how Barbie�s perfect and unattainable beauty and curves might impact my daughters� body image. I loved Barbie as a kid and while I don�t for a second blame her perfect beauty on my own tortured relationship with food and my body, I don�t completely discount her from sending some sort of subliminal message that if you want to be valuable, powerful, and/or happy, work on getting yourself a great pair of legs and you-know-what-else.

I agree that body image is a huge part of what’s wrong with Barbie. But I think it goes deeper than the fact that Barbie is too skinny and out of proportion and it’s more than just the message that beauty comes from how you look and what you wear. To me Barbie’s body language also perpetuates the idea of woman as sexual object. Perhaps it ties in with the Theology of the Body. (I’ll have to think about exactly how at a later date.) I’m not sure I can put my finger on the heart of the matter but somehow Barbie’s body language is all wrong. To me it says that woman is a sexual being and that sex is divorced from reproduction. Just look at that chest and those hips and that stomach!

I can’t imagine Barbie nursing a baby with those breasts. (I can’t see her comfortably carrying a sling or an Ergo for that matter.) It always comes up in every discussion of breastfeeding: our society is uncomfortable with nursing babies because it has sexualized the breast. To me Barbie may be one of the worst offenders in perpetuating the idea that breasts are for looking pretty and not for nurturing babies. So many women today say they feel icky and uncomfortable with the idea of breastfeeding their children. I wonder to what extent Barbie is responsible for that? 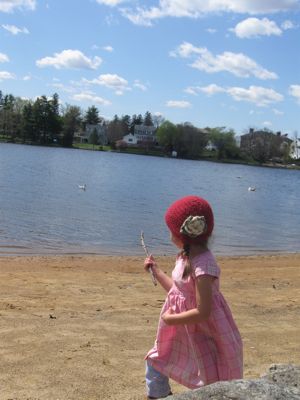 Lastly, while I know that creative children will use their Barbies for all sorts of role playing, I still think that the design of the toy and the way it is marketed make it clear that the way it is intended to be played with is all focused on acquiring clothes and possessions, at changing outfits and looking pretty. Kids aren’t dumb; they get those messages. I know I certainly did as a little girl. These are the messages I’m fighting against. Barbie is about a lifestyle and it isn’t my lifestyle.

I agree that girls can certainly play with Barbie and still get positive messages in other places, can still come out being fine with a great body image and a well cultivated imagination. I know many fine examples of that principle. Still, I see no reason I should give any message I disagree with any toehold in my household and in my kids’ minds. I’m the mommy here and I draw the line at Barbie.

I prefer toys that don’t come with a script for playing with them, toys that not only can be used for other purposes than the ones the designers intended; but that in fact don’t have any message at all about what is the right and wrong way to play with them.  (See number 3.) Barbie doesn’t challenge girls to step out of the box and find creative ways of doing things. She encourages conformity and sticking to the script. And all the doctor Barbies and astrophysicist Barbies and Nobel Peace Prize diplomat Barbies in the world won’t change the basic script.

Now I know people are going to respond with plenty of stories about how they used Barbie off-script. And yet all the counter-examples in the world do still reinforce my point: with Barbie we all know what the script is supposed to be and we know when we’ve strayed off of it. There is no script for how to play with blocks or sticks or pieces of fabric. And even baby dolls have a more open-ended script than Barbie does. 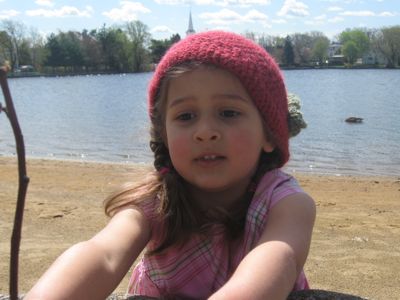 There may be other categories I could add to this manifesto; but I am not going to hold off publication on that account. I’ve been doing that too often lately and am starting to realize I need to just let go and post things that are perhaps slightly unfinished. 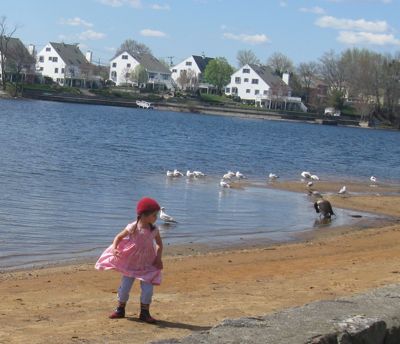