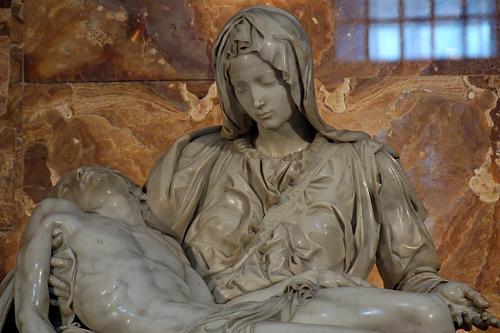 Some time ago I read a meditation somewhere on motherhood and Michelangelo’s Pieta. It was by a mother who was, if I recall correctly, enjoying that wonderful stage of parenting a newborn, spending hours cuddling her little baby and pressing her nose into the sweet-smelling head. She said something to the effect that the Pieta struck her as being a little wrong because Mary, she thought, would have at that moment remembered Jesus as a baby. She would have remembered those moments of putting her face down and smelling the tiny head, that joyful closeness of mother and child. And she would have been unable to resist pressing him close in just that way one last time. No mother, she said, would hold her precious child as Michelangelo’s Mary does in that stiff formal pose. (I wish I could recall where I saw the original of this. I’m afraid I’m misremembering and doing the original author an injustice. this is just my best effort at reconstructing a hazy memory.)

Those words came to me early this morning as I tried to nurse a fussy Ben back to sleep. There is indeed something to what that mother says. It would have been a lovely statue had Michelangelo chosen to portray that moment of the older mother remembering the baby in the stable and tenderly pressing her face to his. But the sculptor has chosen a different moment and I think perhaps a better one… at least in terms of theology if not in terms of capturing the humanity of the Blessed Mother.

But before I explain what I see in Michelangelo’s Pieta, let me say that Mary’s pose still does speak to me as a mother because I do see in the tender way she holds his body the way I hold my baby when he is so limp, so deeply asleep he hardly knows he is in my arms. But it is evident that while there is a hint of that, Michelangelo was thinking along different lines when he composed this statue. For as her right hand holds his body, her left hand is outstretched to present him to the viewer.

First, as I look at this statue I do actually see that young mother of the stable, of Nazareth, though not in her pose so much as in her face. Just look at it: Michelangelo depicts the smooth, sweet features of a young woman, more the maiden of the Annunciation or of the Nativity rather than the careworn visage of the much older Lady of Sorrows who has accompanied her Son on his via dolorosa and watched him die as she stood at the foot of the cross.

Instead, the juxtaposition of the young face with Mary’s pose speaks to me of the young woman who said to the angel: Behold the handmaid of the Lord, be it done to me according to your word. This woman holding the lifeless body of her son knows the man she hold is not only her precious baby, He is something more. No, she is the woman who pondered these things in her heart. She is the woman who told the servants: Do whatever he tells you. She is the woman who presents her son to us and echoes his words, those other words she must also have pondered: Take, eat. For the body she holds was not given for her only but for all of us.