Travel Notes or What Happened on My February Vacation.
3 comments
Share:FacebookTwitter
Uncategorized

Travel Notes or What Happened on My February Vacation.

I’m not sure anyone else is interested in any of these details of our trip, but I like to keep it all straight in my own head. I’ll throw in more pictures though, so at least there will be that. 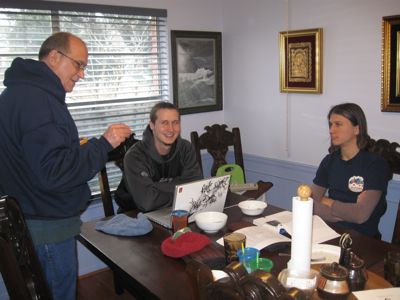 Dad and my brothers

Sunday we went to Mass, of course, at my parents’ parish. Which is where I made my first communion and where I was confirmed and so it still feels like my parish too. The church has been given a face lift in recent years. It’s all prettied up these days so as I hardly recognize the place anymore. It was nice to see familiar friendly faces and chat with people I haven’t seen in a long time. Oh and show off my cute kids. I love showing off my cute kids. Who all behaved beautifully and no one had to be taken out.

Then we went out for mmmm breakfast at our favorite Salvadorian restaurant. Then we got BBQ for Sunday dinner. You know some people watched the Superbowl. Not me. But I was happy for the BBQ. Have I mentioned that next to seeing my family, the best thing about being in Austin is the food? 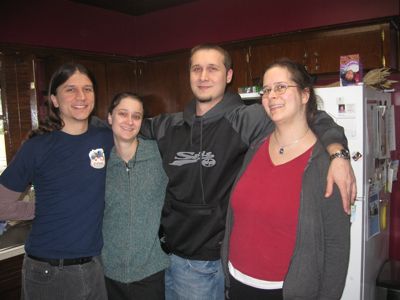 The last time my brothers, my sister and I took a photo together was at my wedding.

On Monday Dom and the kids and I met Mrs Darwin and Jennifer of Conversion Diary and Dorian Speed (By the way, doesn’t that just sound like a cool blog pseudonym? Well, it isn’t. It’s her real name. But she lives up to it.) We met at McD’s—ok, not super food; but you can’t win them all. The kids played and we ladies chatted while poor Dom bravely stayed in the car with slumbering Sophie (Have I mentioned my husband is a hero?) so that I could socialize with some of my favorite blogging gals. It was great to see Mrs D. and Jen again. They are always great company. And wonderful to meet Dorian. The kids ran around and played. Master Darwin spilled tea down the front of his overalls, Jennifer, still haunted by the poop fates, had to borrow a onesie from Mrs D. We repaired to nearby chez Darwin for cookies and more conversation. 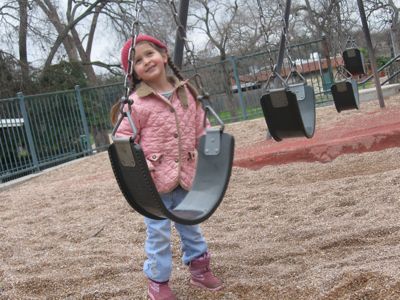 Tuesday and Wednesday we took it easy, spending the days with the family. My dad took the girls for long walks to the park. My brother Tim came and played with them. (He’s out of work now, which is tough for him but has made for a nice visit.) 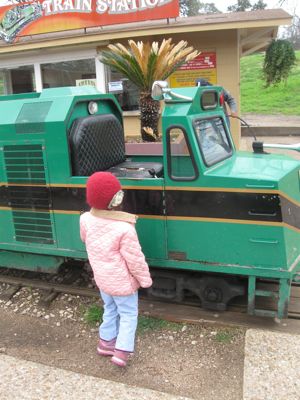 Sadly, the Zilker Zephyr was not running

I gave up on doing more than the most rudimentary sleep management. The kids have all been waking up at 5. (Darn you, Central Time Zone!) Poor Dom says he’s getting less sleep on vacation than he usually gets when he’s working. Sophie has been waking up several times a night and has to be settled by me and only me every time. 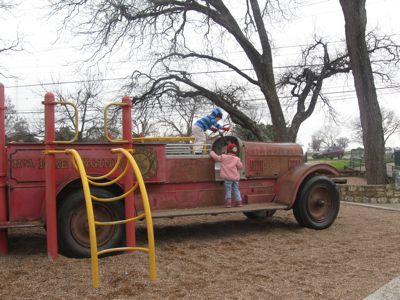 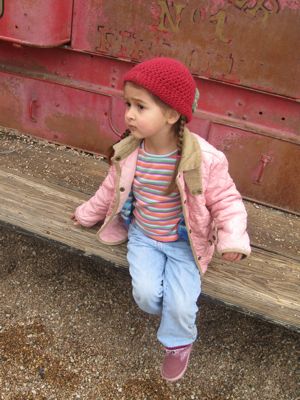 I remember the firetruck from when I was a little girl. Is it really the same one?

Then Wednesday night the storm hit. Bella fell asleep at dinner. Sophie, overtired thing, ran about like a ping pong ball. And even after I’d put them to bed, she kept waking every half hour to forty-five minutes. And then when I went in to resettle her for the forth or fifth and happened to put my hand on Bella’s ankle and it was burning up. Not wanting to wake Bella, I tucked Sophie back in but resolved to find the Tylenol and dose them both at the next wake up. By that point I was positive there would be a next wake up, that Sophie’s fussing was due to illness and not jsut travel woes. Sure enough there was a next wake up and it was dramatic. Both girls burst into our bedroom and Sophie vomited on the floor. I hastened to clean it up while Dom held a screaming Ben and I tried to also take Bella’s temperature. Somehow we made it though the night; but the longest stretch of sleep I had was between 2:30 and 4:15. 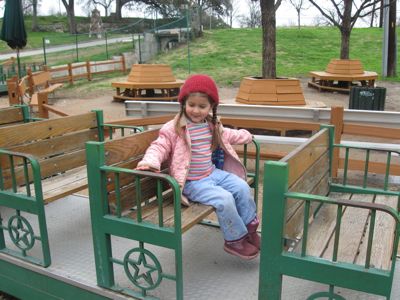 Bella didn’t mind, though. She still climbed up on the train.

Thursday night was not much better. It was terribly hard for the first few hours when every time I fell asleep I was awakened by something or other. Much better when I gave up on the idea of sleeping. Then I just held Ben in the recliner and we both did fall asleep for a couple of hours. Only to have to get up when Sophie started screaming for me. It isn’t easy when both Ben and Sophie can only be soothed by me. 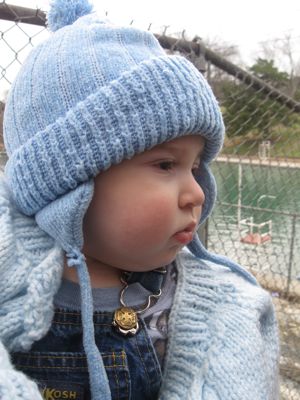 Not only because of the poor sleep but also because it was cold and cloudy, Wednesday and Thursday were both spent not doing much but hanging out around the house and trying not to get sick. By Friday everyone seemed better except for runny noses on all the kids. It was supposed to be warmer so we ventured to Zilker Park with my parents. 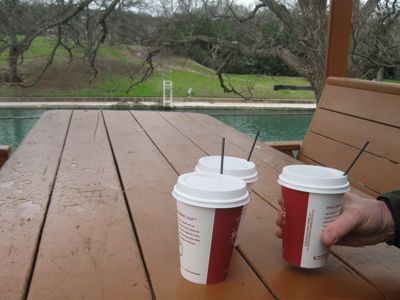 We needed hot cocoa to get through the morning and then we left after only an hour or so and went for burgers. I love Zilker park. The old fire engine is still there that I remember climbing on as a girl. And the train of course. Barton Springs is the same as always. How fun to see my girls enjoying it now. Though it would be nice to go on a warmer day when the train was running. 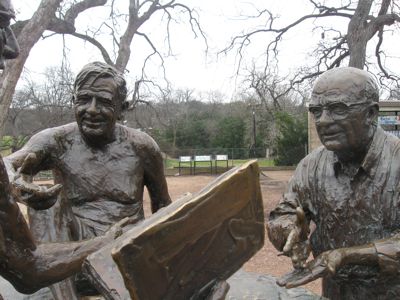 I love this statue

Saturday afternoon was our annual blogger meet-up, hosted by Mr and Mrs Darwin Catholic. This is always the social event of the season. Our gracious hosts organized quite the gathering. They not only opened their lovely home (Ignore Mrs D’s protests. It is a lovely home, not a showplace but one that is loved and lived-in by four adorable little Darwin children), but also served us fajitas and homebrew.  And a wonderful time was had by all. Also there were Jennifer of Conversion Diary, who had a hard time not spilling the beans about her new video project; John Henry who blogs at American Catholic; The Opinionated Homeschooler, who alas isn’t blogging currently, though she hinted that she might be having a comeback soon; and I was delighted to finally meet Devin and Katie Rose, with their beautiful children (I especially drooled over baby Edmund, who is even cuter in person than he is in Katie’s video).  Am I forgetting someone? I feel like I am. Everyone there had at least three children, so the party was full of deep conversation punctuated by frantic screams, spilled cups, runny noses, nursing babies, tipping chairs, and diaper changes. In other words, my kind of party. 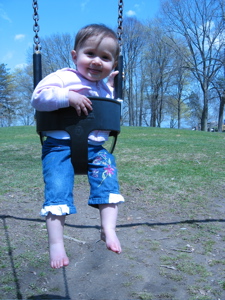 Theresa, Dom, and I all noticed that Sophie’s speech became much more distinct during the week we were in Texas. We noticed the same thing last year with Bella. I think having to talk to others outside the immediate family for an extended period really helped push her to enunciate.

And I think she might be a bit taller too. 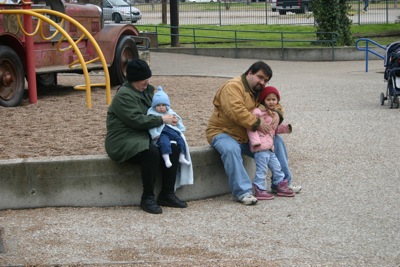 The family braves the cold.

Our flight back on Monday was much harder than the flight down. We had one less set of hands as Theresa flew back on Friday. It was also an afternoon flight and got in at 9. Ouch! Threecranky children and two cranky parents. Plus I was starting to feel sick. 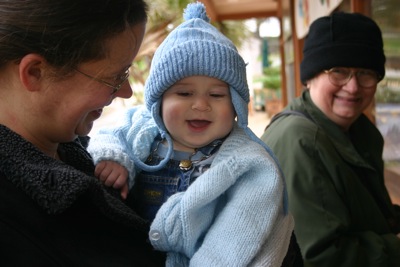 But it’s good to be home. On the way home from the airport my brother-in-law shared a bit of wisdom someone had passed on to him when he was a new parent: When you are a parent of small children you don’t go on vacation for yourself but for the kids. It’s about creating memories. 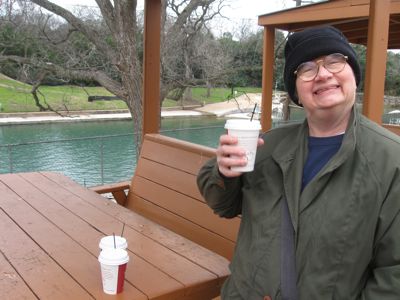 My mom. The best mom in all the world.

Dom and I both got much less sleep than we would have here at home. But we created some wonderful memories not only for our kids but for our whole family. 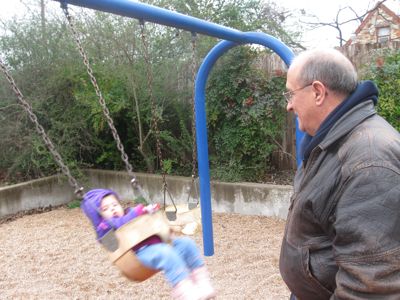 Sophie and my dad. She actually let him read to her, push her on the swing, get her out of the car seat.

Still, I’m tired and we have to get up early tomorrow for Mass. 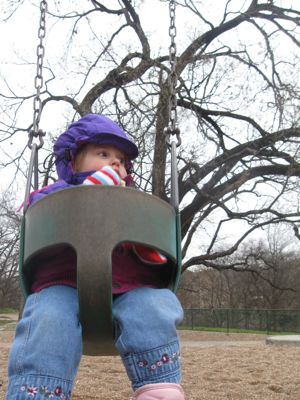 Sophie is addicted to the swing

Time to go to sleep. 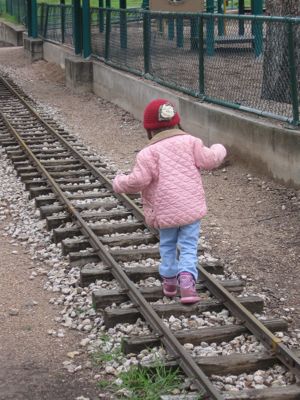