By Melanie Bettinelli on April 24, 2009 in Uncategorized

Thanks as always to our lovely hostess, Jennifer of Conversion Diary. Click here for more Quick Takes. 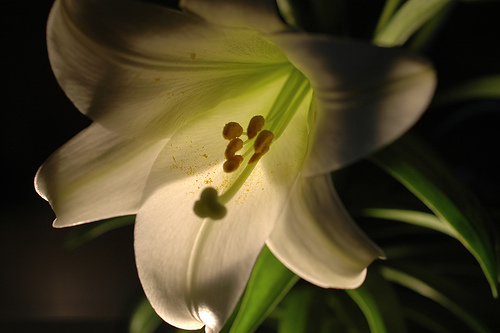 Have I mentioned that I hate the smell of lilies? I’m not sure why but I do. I think they are just lovely to look at but to me they smell foul (and they make me sniffle too). And so every Easter I enjoy the sight of the altar festooned with joyful flowers even as I grumble about the overwhelming stench.

It always makes me think of the conclusion to Shakespeare’s Sonnet 94: “Lilies that fester smell far worse than weeds.” Except in my book they don’t even need to fester first. Incidentally I always hear this particular sonnet in Dr. Alvis’ voice. He taught my British Renaissance Lit class and this was one of his favorite poems.

Silverfish aren’t as bad as scorpions as invading bugs go, but still. Ever since we moved in in November we’ve been plagued with the pesky things. I find them dead in my mixer bowl and in a measuring cup, crawling on the walls, on the ceiling of our bedroom, in our bedsheets. I even found one floating in my bedside water glass the other morning—right after I’d taken a sip of water! I know they’re pretty harmless and not even as disgusting as roaches or as invasive and annoying as moths and ants. But ick, ick and ick. I hate them and want them to go. 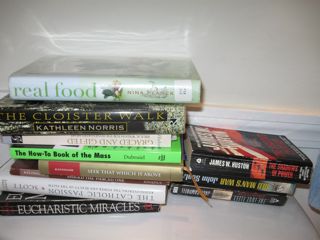 The books that have accumulated in the bathroom.

Except for Real Food on top, which is a library book, mine are all books that collected gradually during Lent as I tried first one book and then another, searching for something that spoke to me. I’ve been reading several of these at a time and in a loose rotation. Still, I think some of them might be reshelved now.

I woke just before Dom’s alarm. Pregnant woman’s urgent bladder. Before I could slip back to bed, I heard Bella whimpering. Toddler accident, poor thing was soaked thorough. I hurried her out of the room because Sophie was miraculously still asleep. Maybe we can reduce her recent crankiness in the morning if she gets a bit more sleep, I thought.

I’ve been recently faced with a deluge of recommendations of getting up before the children to pray as a spiritual practice. I keep shoving them aside as completely impractical. I am so not a morning person, trying to pray at an hour earlier than my kids get up has only ever resulted in my falling asleep over the prayer book. But it seems that God had other ideas this morning. Being up with only Bella, who was content to play by herself for a bit, was actually a nice way to start the day. Sophie is just so cranky and demanding in the mornings.

In my attempts to be a more frugal housewife, I’ve taken to examining the weekly grocery store circulars that arrive in the mail every Thursday. I’m not very good at it; but I try to decide which store to go to depending on which one has meat I need on sale. I figure meat is the single most costly budget item and one that varies greatly depending on sale price. I can buy a bunch at once, seal it in vacuum bags, and throw it in the chest freezer.

Now more than five months since we moved, I’m still looking for a grocery store I like in our area.

Well every store but one lists prices that are good from Friday through Thursday. And that one is the one major chain I’ve not been to yet. Today I noticed in the flyer that they had a good sale on ground beef and decided to check them out. I didn’t notice that, unlike all the other stores, their prices were good from Sunday through Saturday. In other words, I got there and the meat wasn’t on sale yet. Ugh. I felt cheated. Their selection was pretty decent, their regular prices about the same as anywhere else, and the store was clean and well-organized. They didn’t have as many import and specialty items as the stores I usually go to so I couldn’t get tahini for example. They had good customer service, a couple of helpers in the parking lot to unload your groceries into the car and return the cart for you, an aid this pregnant mother with two toddlers much appreciated. Still, I’m a little bitter about having to buy hamburger at twice the price I expected.

The nurse at my OB’s office commented this week that I’ve finally popped. I really feel like she’s right. Suddenly any casual glance will tell even a not-so-observant person that I am a pregnant woman. I haven’t, however, yet got to the point where strangers ask me when I’m due or what I’m expecting or any of that unless I bring up my pregnancy first.

Dom’s decided that this weekend he’s going to break out the grill for the season. 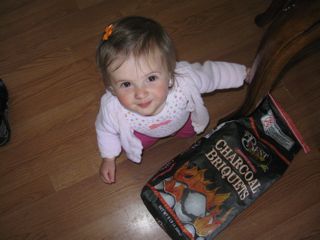 Sophie’s excited about grilling too.

“What Do Jagulars Do?”
A Day Outside

One Response to 7 Quick Takes