We visited to the library this morning for the first time. It might not be such a big deal that it’s taken me four and a half months to get to the library, with the morning sickness and the bitter winter weather; but that the library is less than a mile from the house, within very easy walking distance, and I pass it every time I go anywhere.

Bella went crazy over the books. I could hardly keep her from pulling more and more off the shelf. But there was so much to distract her attention. no sooner would she ask me to read a book to her than she’d be off playing with puzzles or helping Sophia. We did read two books while there and she and I together collected a small pile. Bella is not very selctive, she just kind of runs up to the shelf and grabs; but that will come over time.

Sophie had fun exploring until a father scooping up his 20 month old who was playing at the same toy table as Phia scared her silly. All men scare Sophie silly, even her Uncle Bernie.

I got a library card and checked out a bunch of picture books for Bella. I didn’t have a chance to look at books for me, though, as Sophie had a dirty diaper and it was getting on to lunch time. Next time, though. And found out about a story time that will start up again at the end of April. I should definitely sign Bella up for that.

Bella had a potty success at the library. Her first time outside of the house. I was so proud of her. And you can bet she remembered to ask for candy when we got home.

Dom ordered some beef jerky from Amazon. He got a deal or something. Anyway, it arrived in this gigantic coffin-sized box that I could climb into. Not sure what the packers were thinking. I had to snap a picture. 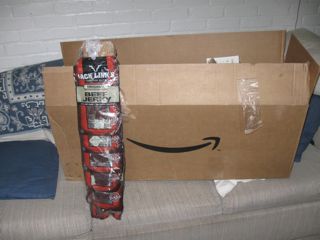 Yes, that package of jerky was all that was in that box except some brown paper.

Sophie has developed a precocious camera awareness. She absolutely knows when I am pointing a camera at her and puts on a “camera face,” which is curiously like her sister’s (although here Bella is doing her serious face, she usually does the exact same scrunchy-eyed smile Sophie is doing): 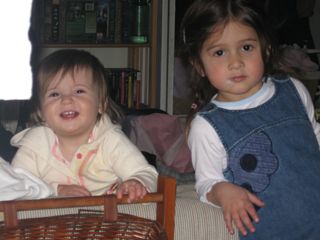 hamming for the camera

She took it a step further last night when she very deliberately paused with a block poised ready to drop into the basket, waiting for my sister to snap the “action shot”: 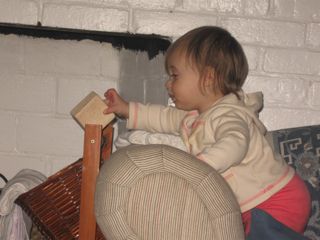 Dom has started a bunch of seeds in flats on our kitchen table. If all goes well, we’ll have several kinds of tomatoes, jalapeno peppers, and tomatillos. Mmmm…. Can’t wait for summer! 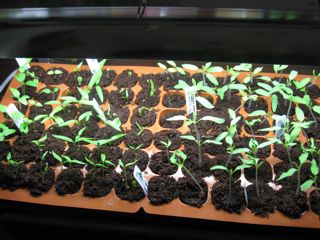 I took some cute photos of Bella stomping in the puddles in her new green boots in the library parking lot this morning. But I can’t figure out how to get them off my phone.

Mmmm… my sister, who works at Starbucks, just brought me a whole marble loaf that didn’t sell by its date. Still fresh enough to eat, though. Very moist and delicious.