The Solemnity of the Annunciation of the Lord
Add comment
Share:FacebookTwitter
Uncategorized

The Solemnity of the Annunciation of the Lord 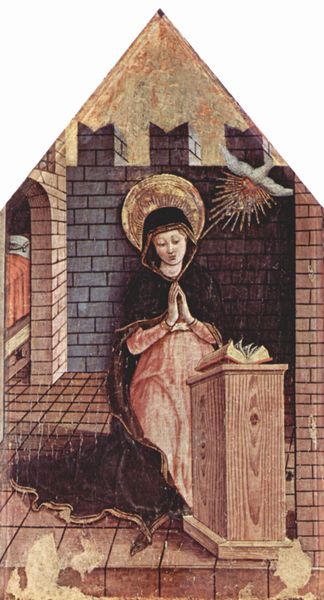 Virgin of the Annunciation by Carlo Crivelli, Altarpiece from San Silvestro in Massa Fermana 1468

The Word of God became flesh and made his dwelling among us; and we saw his glory

This morning I put together a Marian playlist, grabbing all the Marian hymns, songs, etc. from my iTunes library. Here’s what I had on hand (I know there is at least one more cd that I haven’t uploaded to my iTunes that has some Marian hymns on it. It’s probably stuck in one of those boxes yet to be unpacked in the laundry room.):

An English Ladymass by Anonymous 4

Heinrich Ignaz Franz von Biber Rosary Sonatas performed by Pavlo Beznosiuk
(Unfortunately, I only have disk 1 for some reason. I’m missing the last of the Sorrowful Mysteries and all of the Glorious Mysteries.)

Now I recognize that the Regina Caeli is not properly Lenten and neither is the Hildegarde von Bingen O Virga Mediatrix, Alleluia. After listening to the playlist once, I decided to mute those songs for today. But for the next Marian feast that is not in Lent, I’ll put them back in. Now I’ve got a playlist saved to use whenever I want to honor our Blessed Mother.

Almighty Father of our Lord Jesus Christ,
you have revealed the beauty of your power
by exalting the lowly virgin of Nazareth
and making her the mother of our Savior.
May the prayers of this woman
bring Jesus to the waiting world
and fill the void of incompletion
with the presence of her child,
who lives and reigns with you and the Holy Spirit
one God, for ever and ever.
Amen.

Ave Maria
by Chole Agnew
from the album Celtic Woman

The Waltz of the Sorrowful Mysteries
by L’Angelus
from the album Ca C’Est Bon!