Dom took Bella with him to run errands. Hope Depot at least, perhaps other stops were planned too. A special father-daughter day out. Dom sent in a picture taken with his cell phone: 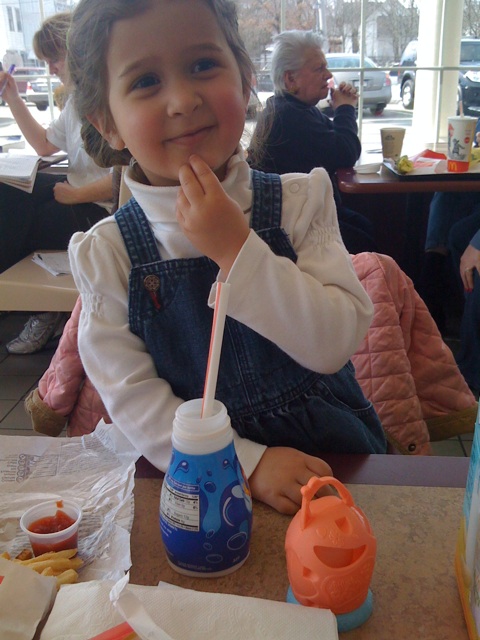 One nice thing about Daddy is he treats you to hamburgers and fries.

Meanwhile I stayed home with Sophie and we had fun too, even though we’re both coming down with a cold. Mostly I watched while she roamed the house, exploring, exploring, exploring. I love watching her become fascinated with the smallest things: the edge of a rug, a small piece of paper, putting her new blocks into a box and then taking them out one by one and throwing them wildly all over the floor. She crawls and rolls and then pulls herself up to stand and walks along sidewise holding onto the couch or the coffee table. And then after an extended expedition asserting her independence, she comes crawling back to touch base with me.

It’s 56 degrees and I’ve opened the windows and it has been so nice to hear snow dripping and birds singing. All the snow is gone from the roofs now, though so no more dripping. There are patches of grass showing through and getting bigger and bigger all the time. Mental note: this week I need to buy Bella some rain boots at Target so she can go stomping in puddles and tromping through the mud. Her snowboots will soon be inappropriate for the season.

Now I’m off to do some sewing while Sophie naps.