New Vegetable of the Week: Purslane 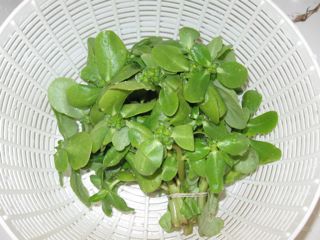 Following our plan to try something new from the farmer’s market each week, this week we bought a bunch of purslane, which is evidently something of a nutrition powerhouse.

Although purslane is considered a weed in the United States, it can be eaten as a leaf vegetable. It has a slightly sour and salty taste and is eaten throughout much of Europe and Asia. The stems, leaves and flower buds are all good to eat. Purslane can be used fresh as a salad, stir-fried, or cooked like spinach, and because of its mucilaginous quality it is also suitable for soups and stews….

Purslane contains more Omega-3 fatty acids (alpha-linolenic acid in particular than any other leafy vegetable plant. Simopoulos states that Purslane has .01 mg/g of EPA. This is an extraordinary amount of EPA for land based vegetable sources. EPA is an Omega-3 fatty acid normally found mostly in fish and some algae. It also contains vitamins (mainly vitamin A, vitamin C, and some vitamin B and carotenoids), as well as dietary minerals, such as magnesium, calcium, potassium and iron. Also present are two types of betalain alkaloid pigments, the reddish betacyanins (visible in the coloration of the stems) and the yellow betaxanthins (noticeable in the flowers and in the slight yellowish cast of the leaves). Both of these pigment types are potent antioxidants and have been found to have antimutagenic properties in laboratory studies.

I made a tasty purslane potato salad, loosely adapted from several recipes I found via Google but have since lost. Anyway, my recipe can be found here. It was a huge hit and kept well. I made it on Saturday night and Dom and I polished off the leftovers at lunch today. See the recipe here at our cooking blog: In the Kitchen with Bella 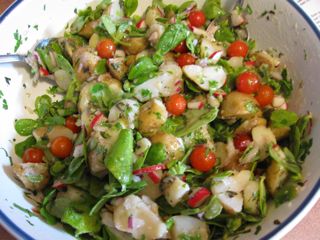