By Melanie Bettinelli on August 23, 2008 in Uncategorized 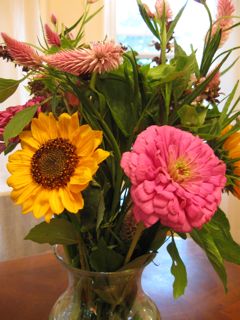 I had Sophie in a front carrier and she tried to help me pick and eat the produce and the bags I placed it in. She was bright eyed and cheerful and won many smiles.

Bella and I polished off the raspberries before we were even done with the shopping. She loves them as much as I do and shoveled them in as fast as I doled them out. It was a contest to see which of us could eat more. I tried to be fair and give her as many as I had. When they were gone and I gave her a handful of blueberries she looked quite disappointed. She ate them slowly and almost grudgingly.

After we’d made the rounds we settled down on a little grassy lawn to enjoy our booty and listen to some music. There is always someone there playing, a different musician or group every week. It occurred to me today that this is Bella’s first and thus far only experience of live music. As I settled down on the grass my first impression of the young man strumming his guitar in a tie-died shirt was a little dismissive. It sounded like the usual hippie “make love, not war” stuff I’ve come to expect. But Bella begged to get down and was soon spinning and hopping and dancing her little toddler dance on the green grass. And then the song ended as the young man with long hair began to introduce the next song, which he said was called “Ook.” He told a story about himself when he was about ten months old, not even walking yet, how he’d play with a pile of records and lift his favorite one up in the air and utter the one word he knew: “Ook.” His word for music. It was a fun little auto-biographical song, the title track, he said, on the album he’s currently recording. And nicely appropriate considering Bella and the other small children laughing and clapping and dancing on the grass. (Well, ok, Bella was really the only one dancing; but there were several other children listening and one cute baby clapping.)

And then he began a song which was even more apropos: “I love to dance,” he sang, “I love to spin… I love to fall down on the green grass….”  Charmingly fitting while Bella danced and bounced and clapped along with the lyrics. Gradually I realized that he was making the song up as he went, composing a tune for the day and for my delighted dancing daughter. “I love the blue sky… I love dogs…“He was never obviously watching her any more than anyone else in the crowd, but the lyrics spoke to her nonetheless and to her enchanted parents watching.

At the end of the song another plug for his mailing list and the new CD. And he said that there were fourteen tracks and then added that there might be a few bonus tracks…. inspired by today. After that how could Dom resist going and signing up for the mailing list? Thanks to the wonders of Google and a husband who both talks to strangers and remembers names (though this one was unusual enough, I’d probably have remembered it too), I even discovered his website OenKennedy.com where I learned that he was a music therapist at the Perkins School for the Blind where my sister-in-law once worked. You can listen to samples of his two albums and buy them there. So that’s my plug for the cool musician who made Bella dance. 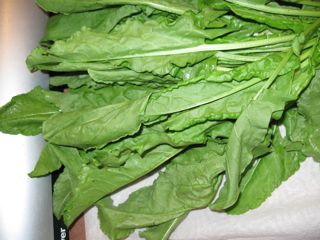 So now I have to figure out how the heck one cooks sorrel. That was the new item we decided to try this week. It has a surprisingly strong lemony flavor. Google to the rescue again: I think this sorrel tart looks like it might be fun. Perhaps for brunch or dinner tomorrow with a fresh garden salad…. I’ll put a little sorrel aside to toss in the salad with some arugula and romaine and use the rest in the tart. 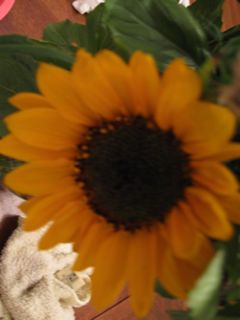 Once a Month Shopping
Dancing at the Farmer’s Market, the Video