I’ve been in a sort of slump the last couple of weeks. I’m not sure why but it’s been difficult to get up the energy to accomplish much of anything. Fortunately this weekend I got over the hump and lots of things were achieved.

What got me there? Dom mopped the kitchen floor.

It’s such a little thing but for some reason that dirty floor was the unsurmountable obstacle standing between me and all the dozens of little things that needed to be done around the house. I hate mopping hate it hate it hate it. And having it done for me was just the spur I needed.

Once that was accomplished I managed to vacuum and straighten the living room and dining room. Purge some clutter from Bella’s toys and reorganize them. Give away a box of miscellaneous kitchen stuff some of which hasn’t been used since we got married.

Freecycle, just the ticket for packrats like me who can’t stand to throw away useful things. I know they went to a good home, to someone who wanted them. And I didn’t have to take them anywhere. The person who wanted them came to my house and took them off the porch.

I moved a bunch of clutter to the basement and generally tidied up and even rearranged a few things. Now I actually enjoy walking into the living room again.

Of course them I discovered the mouse droppings and had to take everything out of the corner cupboard in the kitchen so the kitchen table is currently piled high with stuff. But that is only a temporary, emergency state of affairs. I can live with it.

And to top it all off yesterday I woke up and baked blueberry-apple-oatmeal muffins (recipe here). And then baked my first ever loaf of bread. I decided it was finally time to brave the final frontier of baking. I’ve certainly watched Dom do it enough times. Despite having forgotten the butter until the last minute and having a rather soupy mess when I added it to the dough, the final product turned out rather well, if I do say so myself. 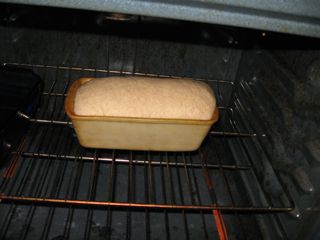 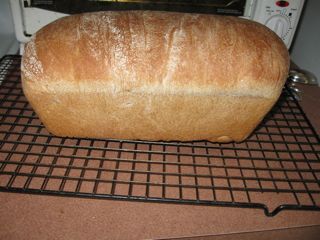 The bread recipe is here, I just substituted whole wheat flour for about half of the bread flour.